Aqua Teen Hunger Force, Harvey Birdman Attorney at Law, Sealab 2021, Space Ghost Coast to Coast, The Brak Show, Frisky Dingo, Venture Bros., the list goes on and on. I'm of course talking about Cartoon Networks highly popular, and vastly expansive Adult Swim line up, or [adult swim] for those correct people out there.

When the Swim shows launched in 2001, they were lead by a small pack of risqué shows. Space Ghost Coast to Coast was the first to spark major popularity and interest in the general viewers, and eventually the developers, Ghost Planet who would later become William Street Studios would go on to produce several ground breaking series for the network such as Aqua Teen Hunger Force (my personal favorite). 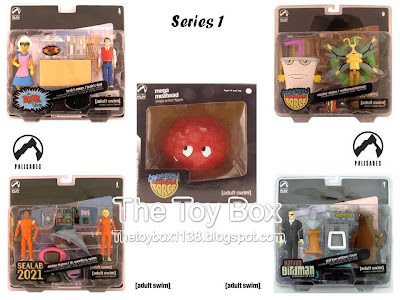 In 2005, Palisade began marketing toys based on some of the more popular shows. Rather than your traditional packaged figure, the Adult Swim figures were packaged two per pack. This was a brilliant strategy as it allowed Palisade to get more figures onto the market in a lot shorter period.

Keeping in theme with Adult Swim's logo being simply a black background with white text, Palisades made sure to design their packages around this. While it is somewhat bland, you can at least rest easy knowing that it keeps with the overall scheme of the original logo's design. In other words, it wasn't done to cut costs, but rather to resemble its origins.

Four two packs were made available in series 1, as well as a "Mega" Meatwad which "stood" over five inches high. The figures themselves were packed in with several unique and colorful accessories and background pieces - such as urinals and The Broodwich sandwich. The figures were; 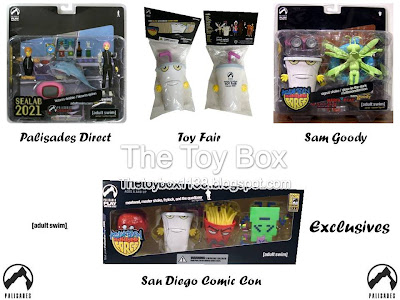 Palisades went directly to the route of exclusives, and offered four different ones in one year. Though to be honest, the Debbie and Quinn pack is just a simple repaint and name change, while the Master Shake and Mothmonsterman change up the accessories, and Mothmonsterman now glows in the dark.

The exclusives offered were as follows; 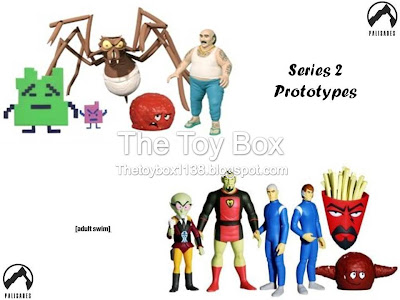 Sadly, before a second series could be produced, Palisades went bankrupt, and closed their doors. There are known prototypes for what would have become five new two packs (ten figures), which you can see in the photo above.

It's a real shame these toys will never see the light of day. The sculpting on both the first series and these later prototypes for series 2 are amazing. The likeness to the characters and the attention to detail is outstanding.

But, unfortunately this is another tale of yet another company that came out of nowhere, and while they had a great product to offer, they either couldn't keep up with the supply and demand, OR they didn't have the financial backing to invest enough into marketing the product so that people knew it was even available.

As a completest I find it difficult to collect this series because I know that it will never be complete. At least thanks to the San Diego Comic Con exclusive set, I can collect all the Aqua Teen Hunger Force Figures...Well, with the exception of Carl, anyway. I really hope that another toy producer out there picks up this series and runs with it in the near future. There are so many toys that could be produced based on the Adult Swim line up.

Join us next Monday for our look at The Legend of the Lone Ranger!