Did you get your copy of the Saga on Blu-Ray yet? If not, run, don't walk to your nearest retailer! For those of you who have yet to get it, or are stuck at work and simply can't get it, let me help ease your time with our latest post of Star Wars figures! 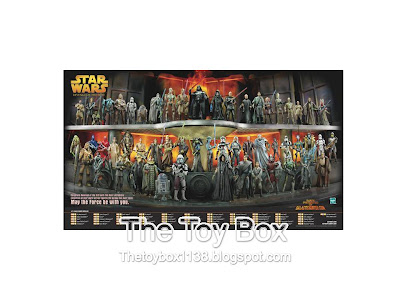 Much like the Star Destroyer passing over the top of the camera in A New Hope, the toy line to Revenge of the Sith was massive, and quiet a site to take in. Even before the movie hit theaters, Hasbro was pumping toys out wave after wave determined to get kids and collectors hooked on their latest and greatest Star Wars train. This of course was not a hard feet to accomplish.

Literally the same day they were put out, figure after figure disappeared from shelves as fans swooped them up to play with, and collectors snagged multiple copies in hopes of cornering the secondary market. The toy isle was a chaotic nightmare of rabid toy buyers.

Much like the Episode I figures, the Revenge of the Sith line was dedicated specificially to the new film, and no figures, vehicles or accessories from the remaining five films were produced for the line.

It all began with the four Sneak Preview figures which were released during The Original Trilogy Collection run. However, unlike the Sneak Preview figures of prior movies which were carded on the current cards being produced (Power of the Force II and Power of the Jedi), the Revenge of the Sith line started (and ended) on their own cards. Seventy-three basic figures followed shortly after along with a plethora of vehicles and other sub lines of figures. 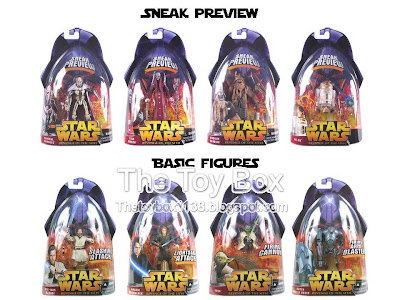 The Clone Trooper was released in two different versions. 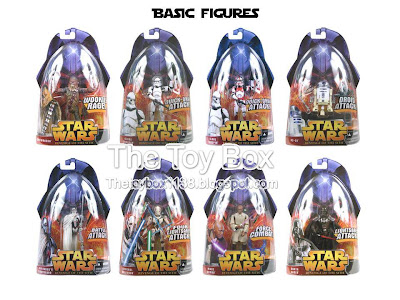 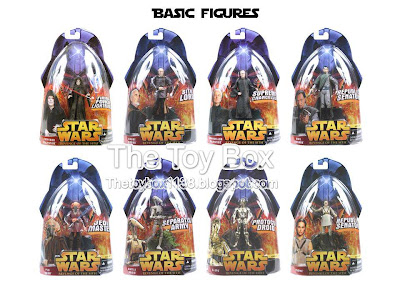 The Royal Guard figure was released in both a blue and red version to represent both the Republic and Empire guards. 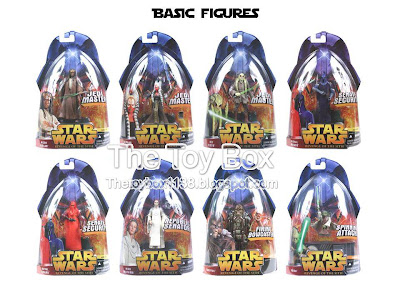 The Clone Commander was releaed in two versions, a red one and green one. 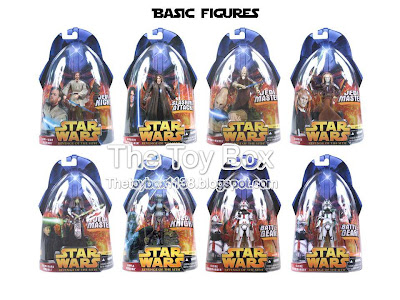 An interesting set of variants exist for the Palpatine figure. For some reason, the figure was initially released with a blue lightsaber. Hasbro quickly fixed this error and released a red saber version.

The Clone Pilot was also released in a grey and black suit version. 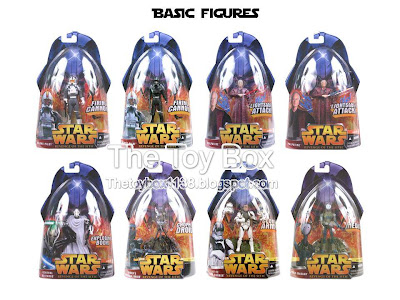 The Wookiee Warrior figure was produced in both a light and dark fur variation. 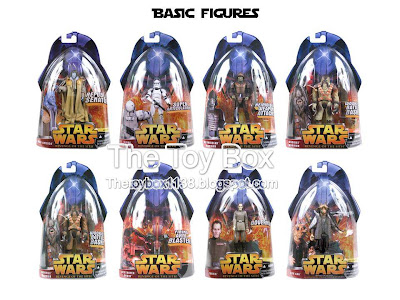 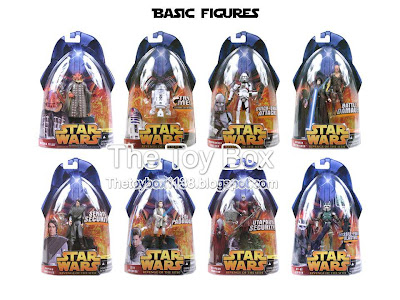 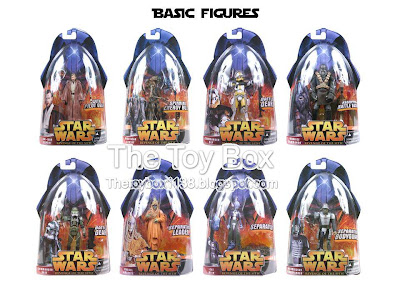 No, I didn't make a mistake here. There actually was a second bodyguard released that the only difference is that the “'s” has been changed in the name. Instead of Being Grievous's Bodyguard, the figure is now called Grievous' Bodyguard. Yes, even grammatical errors warrant a whole new figure in the Star Wars universe. 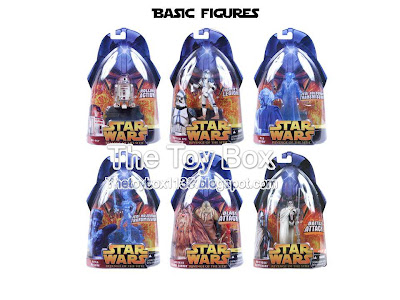 Hasbro produced some great deluxe figures for the series. My favorite amongst them were the "X" turns into "Y" ones. Example, Anakin Skywalker turns into Darth Vader, Rebuild Darth Vader. I don't know what it was about those particular ones, but they were just really fun. 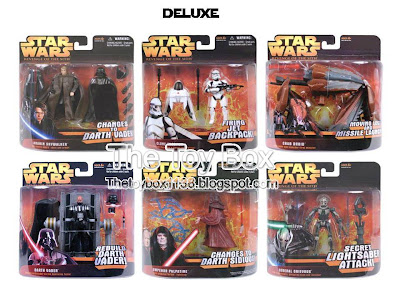 The Vulture Droid came in both a blue and green version. 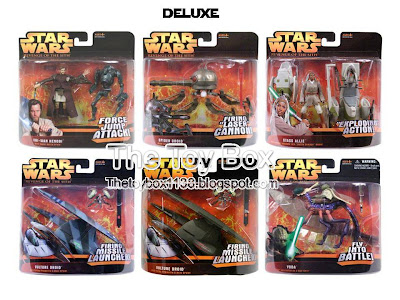 Hasbro struck again with its multiple packs of Clone Troopers, and again in multiple colors. However, this time around the changes were subtle, almost to the point of being easily missed by the average toy isle stalker. 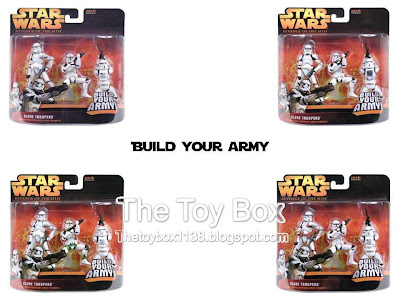 It seemed like everyone wanted a piece of the action when it came to in store exclusives. 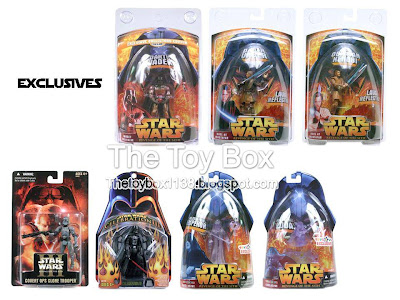 Walmart had an interesting sub series exclusive entitled Separation of the twins which offered little baby figures of Luke and Leia. 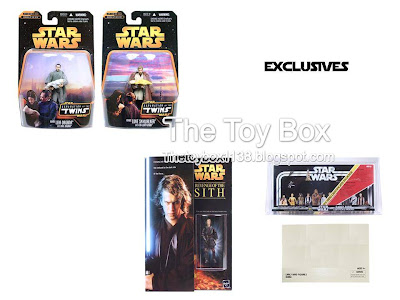 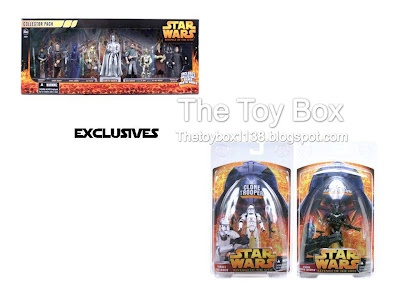 Much like the 300th figure, Hasbro went to great lengths in producing and releasing a 500th figure, Darth Vader. Once again the attention to detail was amazing. 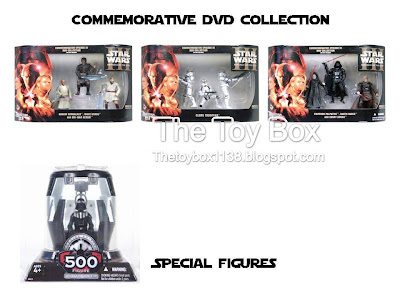 The Evolutions figures were a multi pack which showed a particular character's development throughout the Saga. 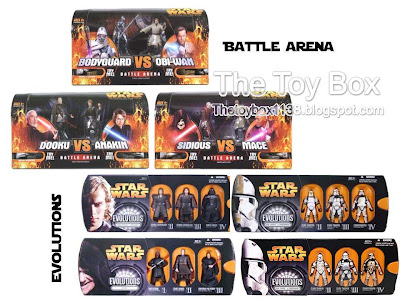 Target once again took the opportunity to release exclusive cup and figure collection. 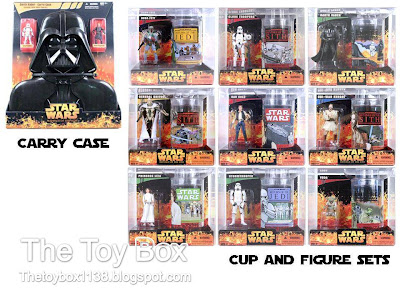 Recognizing that the majority of their customers were collector's, and not kids, Hasbro released special plastic cases for the figures to be stored in. The cases were specifically designed to conform to the shape of the new Revenge of the Sith Packaging. 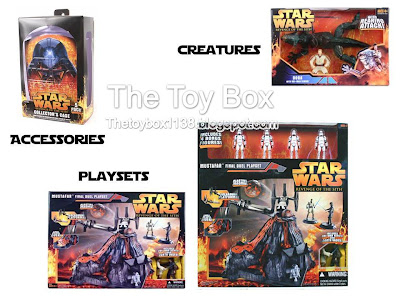 Hasbro release a fair amount of vehicles, with a handful being repainted exclusives to Toys R' Us. 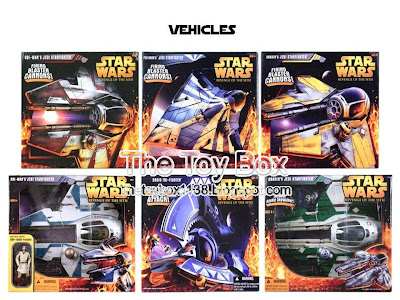 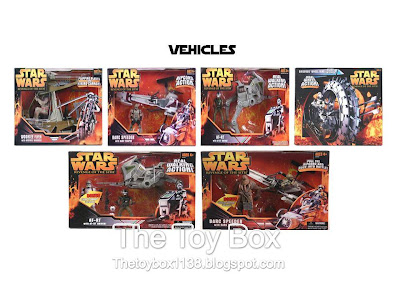 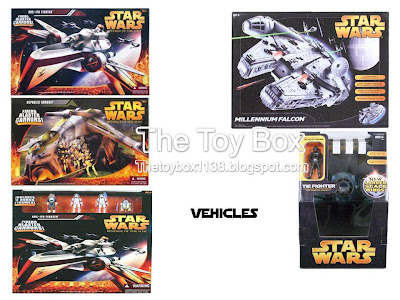 The Revenge of the Sith line ran in the year 2005, and despite being popular amongst fans, many were eager to see something new from Hasbro. Dedicating a single line to any one given movie is a great way to bolster up your collection, but it leaves many fans (im)patiently waiting for something different.

Hopefully you took the time today to get your copy of the Saga on Blu-Ray!

Join us September 19 for a look at The Saga Collection, not to be confused with our prior Saga post.