We continue our month long celebration with a look at the figures based on the highly (over) anticipated film Star Wars: The Phantom Menace. Ever since word broke that Lucas was working on a new Star Wars Trilogy, fans clambered to get insights, merchandise, and rumor milled tidbits of what exactly the film was going to be about.

Prior to the film's release, the toys hit stores hard, and Star Wars fans everywhere went nuts down their local toy isles.

Between 1999 and 2000, Hasbro (who recently acquired the rights to produce the toys in a merger with Kenner Toys) produced forty-nine basic figures. Each figure came packaged with a Comm Tech Chip which when used in conjunction with the reader would produce voices and sound effects from the film. The Comm Tech Chips also doubled as a figure stand.

Coupled with the hype of the film which was only days away from a movie theater premiere, Hasbro, in conjunction with Toys R' Us planned a huge midnight event. The first three waves, as well as several vehicles and accessories were made available on day one. 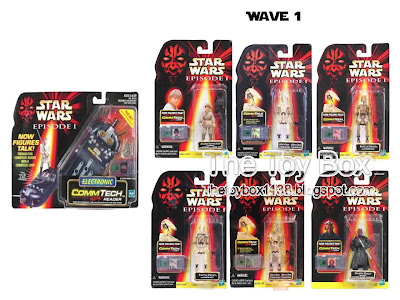 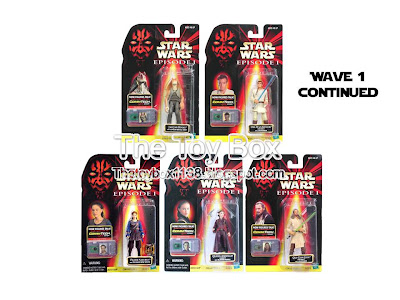 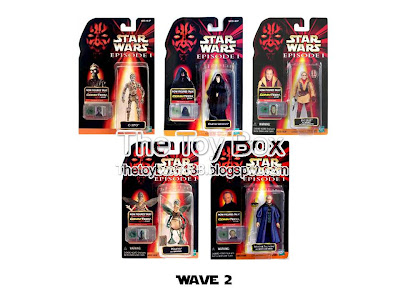 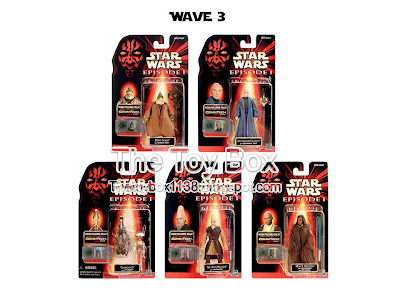 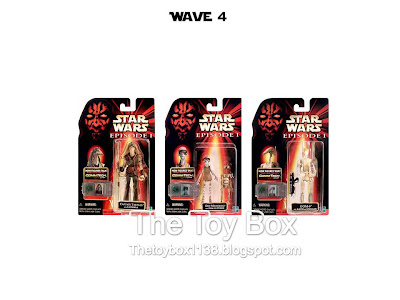 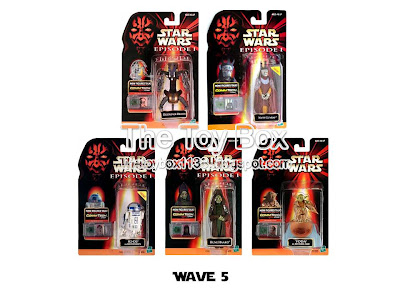 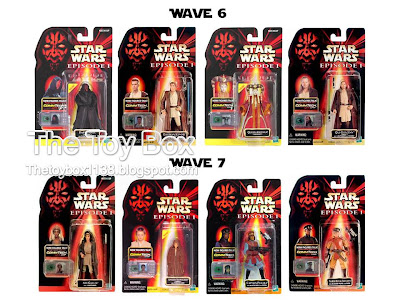 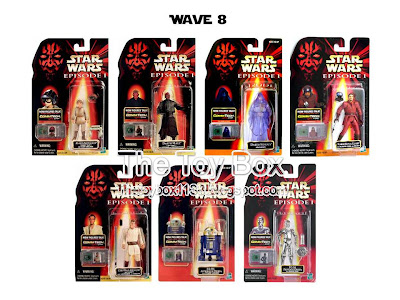 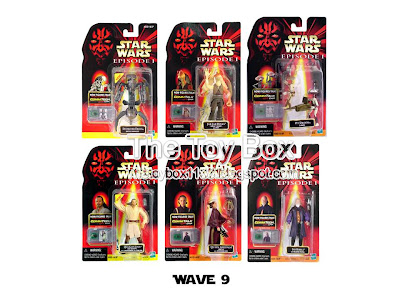 There were three sets that Hasbro started, but could never get enough interest from collectors to continue.

The Holographics, which were a Walmart exclusives were designed to look like holographic images on display stands. The bases would light up, and give the illusion of a holograms (with a little stretch of the imagination).

The two pack Final Lightsaber Duel with break apart Darth Maul was an interesting idea, but so laughable at the same time.

The Trophy Edition figures which were actually planned out for an additional three figures never panned out. Containing a repacked figure and a micro sized vehicle packed together may have seemed like a good idea on paper, but didn't catch on with fans. 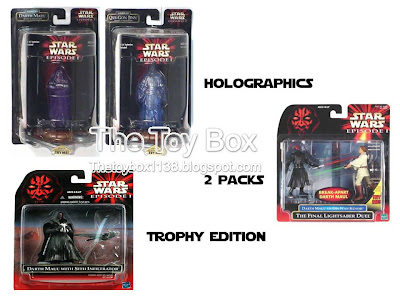 The deluxe figures for Episode I was far from the quality of the Power of the Force ones. They contained a simple figure with a lightsaber attachment that when attached to the figure would cause the arms and/or waist of each figure to flail whipping its lightsaber around.

While not typically something you would see with a 3 3/4 figure line, the smaller accessory packs were actually pretty awesome. They offered clothing, accessories, and even bits and pieces of vehicles that incorporated well with the figures. 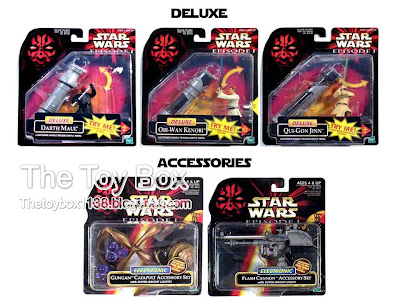 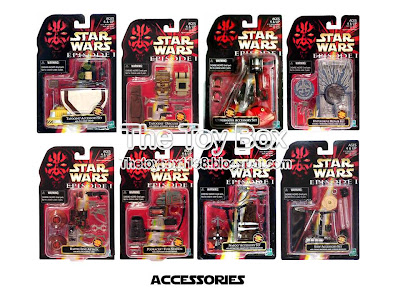 Three cinema scene three packs were created for the Episode I line, but sadly two out of the three contained Anakin Skywalker figures.

The R2-D2 Carryall Playset was an interesting piece in and of itself. While it was a carry case, it also converted into a playset, and included an exclusive rolled up Battle Droid. Though in the long run, it didn't hold many figures. 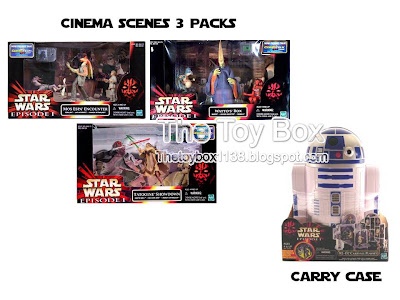 Most of the creatures came packed with a figure. The Jabba the Hutt with 2-Headed Announcer was the most difficult one to track down out of them all. Being released at the tail end of the Episode I line, it was the one released in the lowest quantities.

Expensive, but yet so cheap in quality was the FAO Schwartz exclusive Fambaa with Shield Generator and Gungan Warrior. At a retail $75.00, it was one of the most expensive toys in the Episode I line. 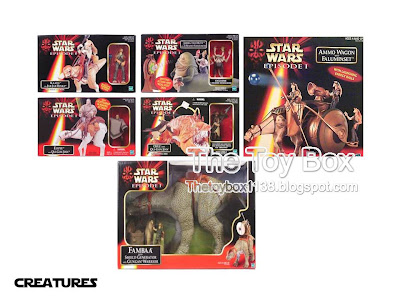 Several vehicles were produced for the line, and were broken up into two categories. The first being the Invasion Force which comprised of the first (top) for vehicles in the photo below, and then all the others were simply categorized as vehicles.

Most of the vehicles (including the Invasion Force) included packed in figures. 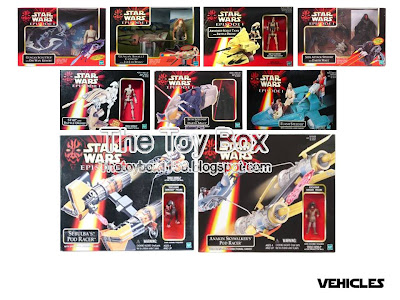 One of the most expensive, and impressive toys produced in the entire Star Wars toy line to date is the three feet long Electronic Naboo Royal Starship. The thing was massive, had incredible detail, and was a ton of fun to play with. 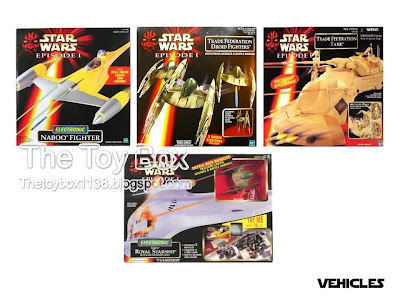 Only two playsets were created for the line, and both were based off the final battle in Naboo. 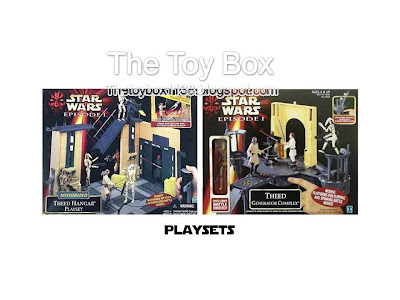 There's nothing wrong with the Episode I toy line. The figures are well sculpted, the vehicles match their overall design, and they were a whole lot of fun to collect. But by the end of its run, it felt (to me) like it never really reached its potential. There were so many possible figures that never got produced. Was it because the result of the film brought all aspects of it crashing down when people finally saw it? Or was Hasbro just eager to move on to a new line? We'll never know for sure.