Pee-Wee Herman was a character created by Paul Reubens in the early 80's for a comedy act with the group The Groundlings. He later formed the character into a more kid friendly persona, which lead to the movie Pee-Wee's Big Adventure, directed by none other than Tim Burton. With the popularity of the film, Reubens was offered the opportunity of a life time from CBS to create the ground breaking show Pee-Wee's Playhouse. 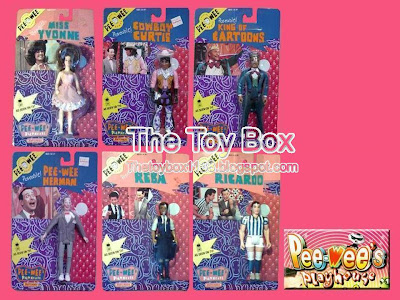 The series launched in 1986, and was an overnight success. Reubens was careful to promote only positive messages for children in ways of never having candy sponsors, or any other sugary treats. In fact, he even tried to release his own sugar free cereal, Ralston Purina Pee-wee Chow, which after a blind taste testing was dropped immediately. As a huge smoker, Reubens was also incredibly careful to not be seen or photographed with a cigarette in his mouth in an attempt to keep young kids away from smoking.

As was the case with most Saturday morning cartoons/shows, it was inevitable that a toy line would soon be pushed on the market. Of all companies, it was Matchbox that found mild success with an "action figure" line based on the series, producing seven figures, a variety of "creatures", one deluxe figure, and one playset. 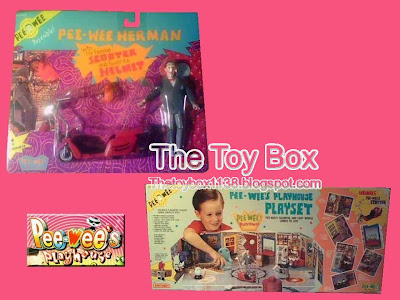 The toys were kind of a let down to kids. They offered no articulated joints, and were poorly sculpted, resembling the characters only in terms of clothing. It really was no surprise that while the TV show itself went on for five years, the toys died out way before the series end.

Many don't know this, but the show helped to launch the career of then unknown Lawrence Fishburn who portrayed Cowboy Curtis throughout the series. Sadly, nobody else in the series really went on to do anything. Reubens included.

Depending on the collector you ask, this series ranges in size drastically. Some consider the figures and Playhouse set to be everything, while others include the various "creatures" which mostly consisted of smaller toys with wind-up action to be a part of it. Due to the similarity in packaging, I have always considered everything combined to be the complete series. After all, what is the Playhouse without Chairry, Jambi, Conky, and all the other various beings that made it what it was?

The only known variant in existence is Chairry on both a purple and pink card. 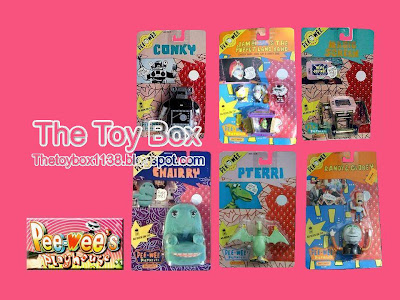 In 1991 Reubens was arrested for exposing himself in a pornographic movie theater. His career tanked overnight, and he disappeared from the spotlight using this opportunity to separate himself from the character. He has since been featured in a handful of big budget films such as Batman Returns and Mystery Men, and as of 2007 announced that he would be developing a new Pee-Wee movie, and has even appeared in public dressed as the character. The film was slated/rumored for a 2011 release, but as of today, nothing has transpired yet.

But, for what it's worth, Pee-Wee's Playhouse remains a staple of 80's Saturday morning shows. With a positive message, a friendly smile, and his trade marked, "Ha, ha, he he he he," laugh, Pee-Wee Herman will be a cherished memory for many a child turned adult.