Toy Biz originated as a small company in Montreal, Qubec. However, by 1988 it had reincorporated itself into an American Company, where it became a major producer of toys based on Marvel Comic superheroes with its first line of toys of the same name.

Marvel Superheroes was a brief toy line introduced in 1990 by Toy Biz which would later spawn individual sub set lines based on Marvel characters such as Spider-Man and the X-Men. While the series didn't take off as it was initially anticipated to, it opened up several doors of opportunity in the world of franchising toys based on comic book series. Doors which have allowed companies like McFarlane Toys and Top Cow to raise the bar in quality and standards, and continue to push the world of comic book based action figures forward. 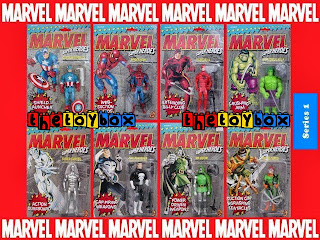 The series had a strong launch, consisting of eight of the most well known, and at the time considerably popular characters in the Marvel Universe. With multiple points of articulation, in both the arms and legs, and also neck, the figures allowed for posing the figures for collectors, while at the same time being very "playable" with by children. The attention to detail was superb, and the figures themselves left little to nothing to nitpick about in terms of quality and accuracy.

The package art left little to desire. The dull gray/silver backs with light blue banner certainly wasn't eye catching to the average toy isle lurker, and the artwork while representing the characters well was simply plain. About the only thing that would catch your attention was the accurate to the comic title logo for each character. Sadly, this dull design would stay for the entire series' lifeline. 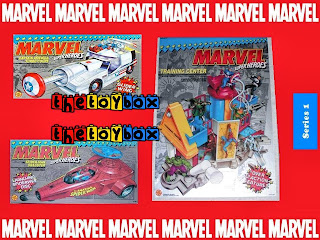 Quiet laughable was Toy Biz's attempt to incorporate vehicles and playsets into the line. While the playsets had a certain amount of appeal to them, the vehicles were simply jokes. Introduced in the first series were Captain America's Turbo Coup, and Spider-Man's Dragster. Needless-to-say, these vehicles didn't fly off the shelf, and offered nothing more than a frown to fans of these classic heroes.

However, with that said, it was only 1990, and toy collecting had yet to explode into the hobby it is today. You have to understand that Toy Biz was marketing directly to children as it was yet unknown that the majority of collector's were, or rather would be adults. 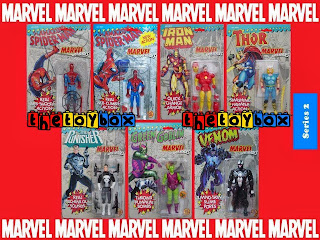 With sales of the first series picking up rapidly, Toy Biz launched a second series literally right on its heels. Before most people had even accumulated the first eight figures, another seven were made available. However, by now the line was shifting drastically towards being a Spider-Man series, and less about the Marvel Universe as a whole with four of the seven new figures being related to Marvel's Wall Crawler, two alone being variations of him (making a total of 3 Spider-Man figures since the series launch). 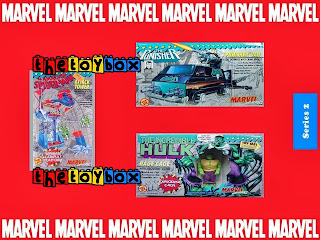 My personal favorite, The Punisher not only got his first figure by the second series, but Toy Biz also produced a pretty acurate rendition of his van, and the only vehicle in the series to really be relatable to the actual figures themselves.

Two more playsets were also released, the large "Attack Tower", and the much smaller Hulk Rage Cage, which included a variant figure of The Incredible Hulk from the first series - Essentially it was Hulk with a yellow shirt. 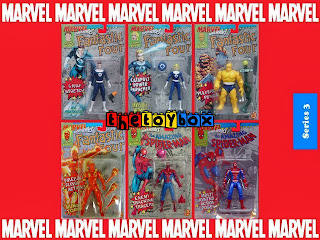 The largest series in the line, series 3 saw a release of ten new figures. While Toy Biz continued to capitalize on the ever growing popularity of Spider-Man with children by releasing yet again two more Spider-Man figures (now a total of 5 in the series), the also surprised fans by releasing the entire Fantastic Four team, and a fan favorite, but still unknown to the mass population, Deathlok. The Silver Surfer figure was also unique, because this re-released figure now sported a shinier chrome look, as opposed to a dull silver plastic. 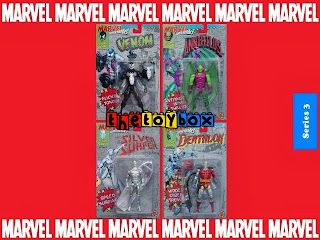 It was around this time that Toy Biz launched a spin off set, The X-Men (not pictured), and sales of the Marvel Superheroes series began to decline. Whether or not it was due to the popularity of the X-Men figures being larger than this series, or if the series had simply run its course is unknown to the general public.

Fortunately by this time Toy Biz also ceased production on vehicles and playsets - possibly due to failed sales of the prior releases, or simply to cut costs in production. 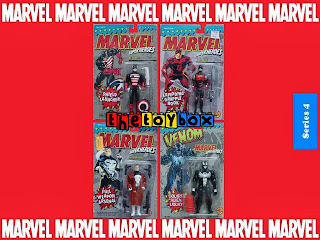 Some argue that there were four series of figures, while others are adamant that there are five. Personal, I go with four, though it is interesting to note that the Venom figure in this particular set has a very different hole punch in the package from the other three figures. So, who knows, perhaps it is five.

The fourth series consisted of only four new figures, while several from the first and second were re-released. While the toy line in and of itself was dwindling in sales, it is arguable that the re-release of older figures as opposed to focusing on more new ones is what killed the franchise off once and for all. Though it is possible that Toy Biz was prepared for this and was simply re-releasing these figures to push out back stocks onto the market as opposed to having storage in a warehouse which would simply be destroyed (recycled, melted down, pick your choice word) if it remained unsold.

Unimpressive was that three of the figures in this series were nothing more than touched up/altered figures to make newer variations of prior released figures, and a repainted Captain America to make U.S. Agent.

By 1994, Marvel was in full control of the toy isle with no less than six different toy lines. Sadly though, with sales falling each month in the Marvel Superheroes line, Toy Biz called it quits, and focused their efforts on other Marvel related products.
Still, what a great series this was. With accurate sculpting, beautiful attention to detail, and characters that are simply loved by everyone, this series was a true treasure to toy collectors around the world. It paved the way for most super hero franchises today, while at the same time staying as memorable as yesteryears great super hero series like Super Powers and Secret Wars.