In 1992 Midway developed and released the first ever motion capture fighting game for an unsuspecting public of arcade dwellers. Mortal Kombat was an overnight success taking in millions of dollars in quarters on a weekly basis. The game was so gruesome, that it would later prompt the US government to inform all software developers that they had one year to develop (with approval from the government) a working rating system for games. Thus the ESRB was formed - Entertainment Software Rating Board.

In 1993 Midway followed the success of the first game with the even more popular Mortal Kombat II. The series introduced gamers to even more characters, and was even faithfully ported over to home console systems such as the Sega Genesis, and Super Nintendo. 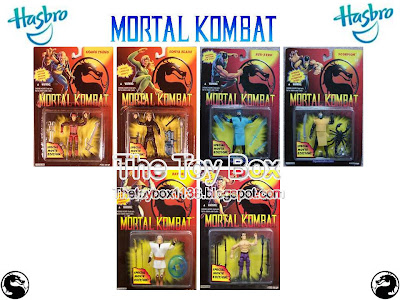 One year later (1994) Hasbro approached Midway for the rights to produce a line of figure based on the series. Similar to G.I. Joe, the figures stood 3 3/4 inches high, and featured multiple points of articulation.

Hasbro probably speculated that selling packaged figures without any accessories or weapons wouldn't be a popular decision among toy selecting children, and thus decided to produce several variations of packed in items with each figure. Ranging from spears to nunchucks, to guns, the variety was somewhat fitting to each figure, regardless of the characters in the games never using weapons (until later Mortal Kombat games anyway). 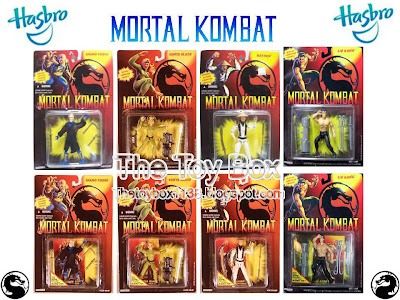 Each figure was released twice, in two separate runs. The first "printing" of figures consisted of the basic figure with the various weapons and accessories. When a "reprinted" set was produced, each figure now sported a small triangular sticker on the bottom left of the plastic bubble, as well as an insert which contained pro tips and codes for the various console versions of Mortal Kombat II.

Overall, Hasbro did a great job in presenting the entire line-up of original MK characters through single packs, vehicle pack-ins, and multi-packs (see below for information on vehicles and multi-packs).

The figures were fair resemblances of the characters, and came packaged in a very eye catching red bubble package with the Mortal Kombat logo displayed at the top next to an artist rendition of the character. 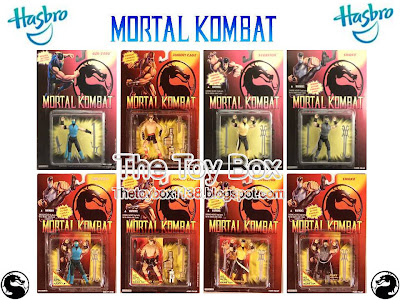 In 1995 Midway developed Mortal Kombat 3 for the arcade, while New Line Cinema released a fairly accurate, and true to the game film for movie theaters.

Capitalizing on the success of the film, Hasbro repainted the majority of their figures, and re-released them with a new sticker on the packaging that informed consumers that they were "Special Movie Editions". Some of the accessories and weapons were also changed, but again were simply there to appease children as even in the movie the characters sported no weapons (with the exception of Sonja who is first seen with a shotgun).

With the exception of the sticker, and the backer board showing the available characters, the packaging stayed the same to the originally released figures. 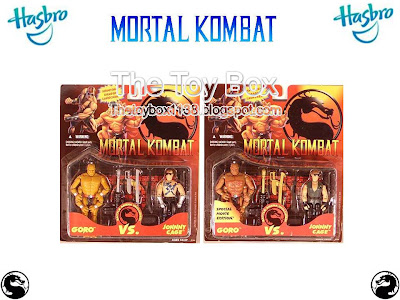 Both in the regular line up of figures, and then again in the "Movie Editions" line up, Hasbro released a two pack featuring Goro and a variant Johnny Cage figure. This was the only way one could obtain the Goro figure. While you had to get a second Johnny Cage figure, at least Hasbro was kind enough to alter his appearance. For the "Movie Edition" pack, it was the only way to get a movie version of Goro and Johnny Cage as neither were released in single packs. 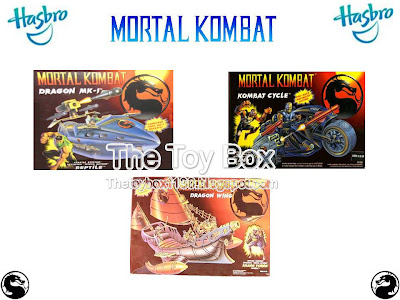 As is the case with most toy lines, Hasbro introduced vehicles into the series in an attempt to sell more toys. Unique to the Mortal Kombat line was that while the vehicles themselves never made an appearance in the games or movies, they were the only way to get the figures Kano and Reptile, each packed in with their respectively assigned vehicle. The third vehicle came with a repainted Shang Tsung. 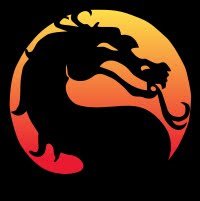 Throughout the years, Mortal Kombat has seen the license for figures handed from company to company. Many have tried to make a successful toy line, and most have failed. Hasbro's, while not the best of the attempts, at least gets to say they were the first. If anything, the series showed the potential that lied in video game players desire to collect memorabilia from their favorite games. That alone has opened the door to many toy producers to create single figures or entire series based on various video game characters and series as a result.

Hasbro, you get an "A" for effort!

Click "HERE" to go back to the home page. For more posts related to this one, please click the labels below.
Posted by OK Records 1138 on August 29, 2011
Email ThisBlogThis!Share to TwitterShare to FacebookShare to Pinterest
Labels: 1990's, Arcade, Hasbro, Mortal Kombat, Video Game Toys