It never ceases to amaze me what was deemed marketable in the 80's. It seemed like every time you turned around a new series was hitting the Saturday morning cartoon line up, while a new toy was cluttering up the isle of your favorite toy store, soon to be in the clearance section.

During the late 80's, Kenner was madly grasping at straws trying to find the overnight success it found with the Star Wars line which had ended in 1985. If it was a show targeted towards kids, Kenner was right there bidding for the rights to produce a toy line. 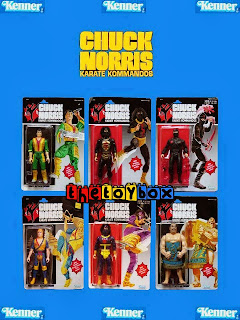 In 1986, the animated mini-series Chuck Norris Karate Kommandos aired as a five part special. It was released side by side with the toys and Star comic book series of the same name, and was little more than a two and a half hour (with commercials) promotion to sell toys and comics to kids.

The series was produced by Ruby-Spears Productions, who had found success with the animated Mister T show staring Mr. T, and Mr. Norris's show followed the same formula. Each episode would begin with a live action Norris working out in a gym, and briefing kids on the synopsis of the show to come. At the end of each episode, we would return to a live action Norris who would provide a moral lesson. Norris also provided the voice for his own character. Needless-to-say, the series never took off.

With generic plot lines based on Norris as the head of a government command unit battling against a secret organization of villains known as Vulture, the show never really offered more than a poorly done rip off of G.I. Joe. The character names were cheesy, with such gems as Super Ninja, and Ninja Warrior. 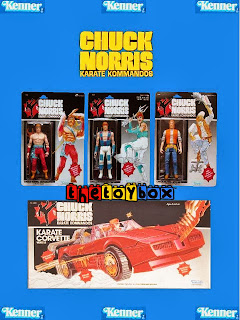 For the mini-series, Kenner produced nine figures (three of which were Chuck Norris variations), and one vehicle. The figures offered standard articulation in elbow and knee joints, as well as a swiveling neck, and each figure was fairly colorful, and catching to the young eye. Each figure came with an accessory that made little to no sense when compared to the actual TV series, and the packaging was a bland gray and black layout, with a drawn in character to resemble the figure inside. 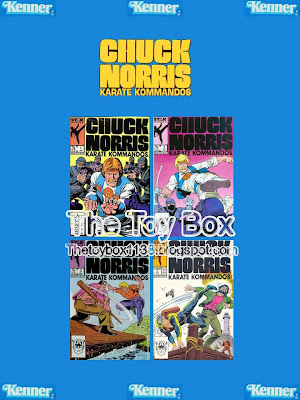 The comic book series which lasted a whopping four issues was even more of a bomb. Despite being drawn by Steve (Spider-Man) Ditko, the series failed on so many fronts from story to characters. It simply was not entertaining, and Star pulled the plug in just four months, making Chuck Norris Karate Kommandos one of the most short lived regular series books in the history of comics.

Between Ruby-Spears Productions cartoon mini-series, Kenner's action figures, and Star's comic books, it seemed that Chuck Norris and his Karate Kommandos were just never meant to be. Everything seemed to fizzle away overnight as if it had never even existed. It was also around this time that Chuck Norris himself seemed to fade away into the background of Hollywood actors, remembered now only as some legendary mythical creature with a beard of extraordinary powers.

As of April, 2011 the series was made available by Warner on their website as a "Manufactured on Demand" DVD - Essentially meaning that they would produce a set of the DVD's for each person who ordered one, but no more than that. It is unknown how long this DVD will be available, so grab it while you can if you're interested. You can find it, "HERE".

Click "HERE" to go back to the home page. For more posts related to this one, please click the labels below.
Posted by OK Records 1138 on August 08, 2011
Email ThisBlogThis!Share to TwitterShare to FacebookShare to Pinterest
Labels: 1980's, Chuck Norris, Chuck Norris Karate Kommandos, Kenner