The Goonies is a timeless classic, and yet it's funny how my perspective of watching has changed from that as a kid to an adult. For those of you who remember the film as vividly as I do, picture if you will the scene where Mama Frutelli shoes the kids out of the restaurant, slamming the door behind them. She rests her back against it and mutters, "Kids suck." As a child, I would always shout at the TV, "Hey, screw you, lady!" As an adult, I can't do anything other than shake my head in agreement and proclaim, "Boy, you said it, lady." Funny how time changes us. 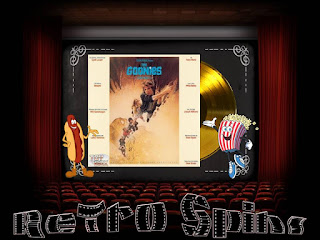 The Goonies, a tightly-knit band of misfit youngsters, are breaking up. With greedy developers about to raze the neighborhood, the kids spend a final drizzly morning together, trying to find a way to say goodbye. Instead, they find a real honest-to-gosh 17th century pirate map - and set out on a dazzling, day-long quest for treasure rich enough to save all their homes.

The Goonies follow the map (and their dreams)...and enter a fabulous subterranean world filled with caverns, crooks, skeletons, booby-traps, a magical, moldering pirate ship and marvelous milquetoast of a monster (ex-Raider football star John Matuszak who has swivel piglet ears and a face only Dr. Frankenstein could love.

Steven Spielberg (creator of E.T. - The Extraterrestrial, the Indian Jones films, Gremlins, Back to the Future and other blockbusters) and Richard Donner, director of Superman, Inside Moves and Ladyhawke) combine their cinematic wizardry to create The Goonies, "The Goonies 'R' Good Enough" sings Cyndi Lauper in the film's title song...and you'll agree because The Goonies is part Hardy Boys, part Treasure Island, part Our Gang and 100 percent adventure! - Back cover of the original VHS

Cyndi Lauper does indeed sing "The Goonies 'R' Good Enough", but is the soundtrack?

Thank you for reading. Goodnight.

I kid, but unfortunately not about the album being any good.

It's a pretty big thud for such a monumental film. Cyndi Lauper's above mentioned track is decent, or, "good enough", if you will. However, let's be honest. It's by no means her best material. Nor is it a top ten hit.

This is disappointing as this album is not easy to track down in CD format, neither is it necessarily cheap. You'll easily spend between $30.00 and $50.00 for the few which appear on ebay here and there.

Overall, the soundtrack is like a sandwich. It starts with Cyndi Lauper's track as a nice piece of bread, and finishes with the instrumental theme from Dave Grusin as the second piece of delicious bread. Unfortunately, in between said bread is a bunch of moldy meats and cheese with soggy vegetables and out of date condiments.

This is quite a bummer because it's not like this album is packed full of a bunch of random no name bands. It's got the likes of Philip Bailey, The Bangles, REO Speedwagon, Luther Vandross and Joseph Williams (who would later join Toto, and is the son of composer John Williams). These are not nobodies in the realm of 80's mainstream music. Cyndi Lauper even has a second track on the album, but it's nothing to write home about. It's as if the producers went to all of this trouble to find some of the hottest names of the 80's, but none of them wanted to bring their "A" game to the project.

Now that I've totally stepped all over the soundtrack, let me be fair to one track which gets an honorable mention. Teena Marie's 14K is a pretty good track. In fact, it may be better than The Goonies 'R' Good Enough. Glaringly omitted from the soundtrack is the on the edge of your seat opening queue, Fratelli Chase, where the family break brother Jake from prison and lead the police on a chase across town, introducing us to most of The Goonies in the process.

I proclaimed a couple Retro Spin posts ago that I was having a lot of fun with this year's albums. After The Lost Boys, and now, The Goonies, I'm starting to get a little bored of it all. I need to dig deep and find a good soundtrack to get me back on a positive mindset.

Click "HERE" to go back to the home page. For more posts related to this one, please click the labels below.
Posted by The Toy Box on February 11, 2020
Email ThisBlogThis!Share to TwitterShare to FacebookShare to Pinterest
Labels: 1985, 80's Album Review, 80's Music, 80's Music Review, Music of the 80's, Retro Spins, The Goonies