For those of you not familiar, Olmec Toys was a multi million dollar toy company that focused strictly on characters of African descent - Some fictional, others of actual people. The company is most noted for its lines; Bronze Bombers (a G.I. Joe sort of figure), Sun-Man (in the scale / design of your typical He-Man figure), Butterfly Woman (a counterpart to Sun-Man in the style of She-Ra figures), as well as many others.

The company began in 1985 by founder and chief executive Yla Eason, and is noted as the first company to produce toys to meet the demand of ethnically correct figures and dolls for African and Hispanic decedents. In fact, Eason is noted as entering the toy business in a rather unconventional way. It happened when her son made the comment that he could never be a superhero because all superheroes were white.

Side Note - Obviously Mrs. Eason didn't let her child(ren) read such influential comics which included characters such as Black Panther (first appearing in Fantastic Four number 52 in July of 1966), Black Lightning (who debuted in his own comic in 1977), Amazing Man (who has seen numerous iterations of an African decedent man in the role since 1983), not to mention the many others. Just saying.

Though it shut down in the late 90's, Eason and her company received numerous awards during its 10+ years of operation, and rightly so. The figures produced were top notch for their time in both design and quality.

Today we look at one of Olmec Toys not so know properties; Hi*5. The line supposedly consists of six figures, but we've only ever seen five of them (never seen Mr. Basketball). Each one is designed with a specific sports theme in mind.

Admittedly the artwork on the packages is rather cheesy. The cardbacks look like they were drawn by a high school art student during their first year of art class. However, in conjunction with the color scheme, it actually works well. Your eye isn't really drawn towards the character on the package, but more so to the bright blue and pink banner at the top. 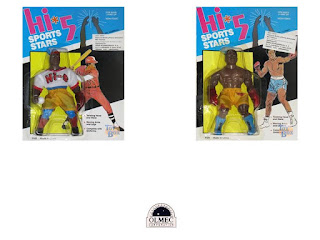 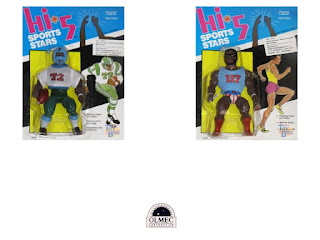 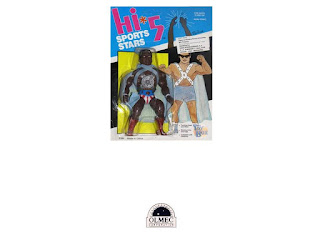 These figures are pretty much non-existent on secondary markets, so value at this point is very difficult to gauge.

Click "HERE" to go back to the home page. For more posts related to this one, please click the labels below.
Posted by The Toy Box on August 28, 2017
Email ThisBlogThis!Share to TwitterShare to FacebookShare to Pinterest
Labels: 1980's, Hi*5 Sports Stars, Olmec Toys