Robot Chicken is kind of like Saturday Night Live. Some skits can be incredibly funny, while others are so dull you just wish they would hurry up and end. Though it is skit based, many characters are used in reoccurring roles, and sometimes even cross over to other skits to make appearances. The biggest draw for many to the show is its use of vintage action figures and stop motion animation to create comedic scenarios that are often times over the top to the point of parodying the source material - Think Twisted ToyFare Theater, but on television as opposed to in printed pages - P.S. Twisted ToyFare Theater is better. 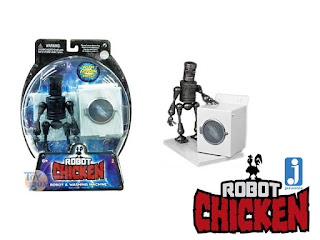 Jazwares is a company that is known for producing toys based on animated series, and that's rightly so - They do it well. Their entry into the Robot Chicken universe is nothing short of spot on to their television counterparts, and even include iconic accessories as seen in the show. 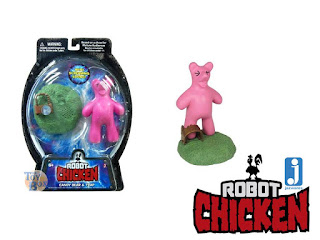 Because a lot of the characters in the show aren't owned by the developers, this would explain why the series is so limited in terms of what it's offering. You'll only find characters that were created specifically for the series that don't infringe on the copyrights of other toy companies - Not that we really need a Cobra Commander from Robot Chicken anyway as it's nothing short of the vintage Hasbro version. 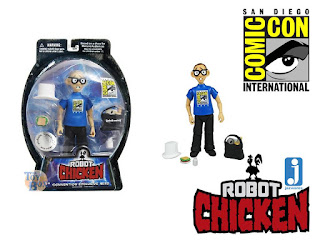 The end result was only a handful of figures, one of which was limited to a San Diego Comic Con release. The series includes; Mad Scientist and Robot Chicken, Robot and Washing Machine,Candy Bear and Convention Exclusive Nerd.

The last piece developed for the series was the large lights and sounds Robot Chicken. By far this is the hardest item to come by if you're collecting the toys. Not only is it difficult to find, but it's challenging to find one in good condition boxes. The packaging is prone to crushing and bulging - Most likely caused by poor storage from the owners. 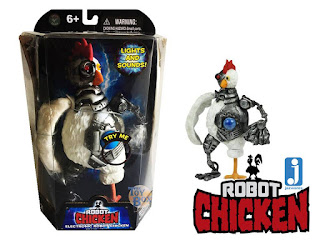 Overall this isn't a bad series - Especially if you're a fan of the show. The look in the sculpting is definitely there, leaving no question as to which characters they represent.

Click "HERE" to go back to the home page. For more posts related to this one, please click the labels below.
Posted by The Toy Box on November 14, 2016
Email ThisBlogThis!Share to TwitterShare to FacebookShare to Pinterest
Labels: 2000's, 2010's, Adult Swim, Cartoon Network, Jazwares, Robot Chicken, Seth Green