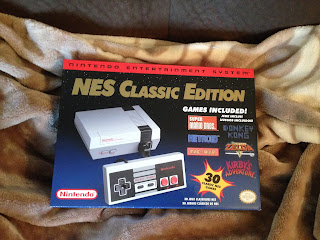 In a turn of events that is shocking to nobody, Nintendo has once again botched the release of one of their consoles. However, unlike the Wii U, which was released seemingly overnight to an audience unaware of what it actually was, the Nintendo  Classic Edition was a highly anticipated piece of hardware that fans had been asking about pre-ordering since the day it was announced.

With such high demand, retailers actually ended up going in the opposite direction, denying pre-order sales for fear they wouldn't be able to accommodate the many purchases that would have been made in advance - That fear turned out to be justified.

Stores across the US and Japan were selling out of the console within ten minutes (or less) of opening their doors on the day of release - Friday, November 11, 2016. The problem was one Nintendo should have seen coming a mile away.

Retailers such as Target, Toys R' Us, Best Buy, Walmart and even GameStop had less than twenty consoles to distribute per store. If this weren't bad enough, they didn't even have enough extra controllers to sell alongside the systems. Stores were lucky if they had received two controllers - With several reports of many getting one or none.

Now, don't get me wrong. I'm sure Nintendo is pleased with their sales numbers as of this morning. I'm sure that in some board room somewhere, somebody is getting a massive pat on the back for their ingenious idea to release a Classic Edition. I'm sure as they count the cash in hand that their smiles are growing wider and wider with each stack. Yes, Nintendo can claim their NES Classic Edition a commercial success.

A commercial success doesn't mean a public one. If you were to ask me, I'd claim the NES Classic Edition to be a massive public failure.

Because Nintendo couldn't meet with supply and demand, and there was no reason for this beyond Nintendo's ever growing incompetence to determine the amount of product needed for a public launch. Here's a perfect example;

I arrived at my local Target at 6:45 AM for an 8:00 AM opening. There were just two people in line already. By 7:30 AM, there were forty people. This line continued to grow. At 7:55 AM, the manager of the store came out, and asked, "Is anyone in this line NOT here for a Nintendo?" Only one hand went up, and we'll go into that person later in this article. The manager then announced, "We have only fifteen Nintendo consoles."

Disappointment obviously began to be audible at this point. He then said, "When we open, it's going to be first come, first serve. You may not hold one to shop for further items. You need to pay for it at the counter, and if your card is declined, you will forfeit your purchase. This line will move in an orderly fashion in the order of individuals as you are now, and it is limited to one per customer."

During our time in line, I met several people. Many of them had attempted to go to Walmart at midnight to get the console, but were told that it would go on sale at 7:00 AM. Shortly after the midnight hour, someone at Walmart tired of being asked about the console, and decided to sell them. In other words, by 7:00 AM, the whopping six that they had received were long gone.

The local GameStop received ten consoles, and two controllers. Best Buy got twenty consoles with no controllers, and Toys R' Us got nothing.

What does all of this mean? It means that for every one person that got the Nintendo the second the doors opened (because remember, they sold out everywhere), about five or more people were turned away. So if GameStop got ten consoles, theoretically, they turned fifty people away before an hour had even passed from the time the store opened.

Now let's take a step back to my personal experience at Target. I want to mention how scalpers just really tick me off. As I said, I was third in line. Ahead of me was a guy with his girlfriend. Behind me was a family of four. The guy's girlfriend was letting everyone know that she was going to buy a Nintendo too because she could, "Get $300 for it on ebay." She didn't want one. She just wanted to sell it. The family of four behind me - Yeah, they each wanted one for the same reason. Right there that's five consoles going in the hands of scalpers.

Now let's take a step even further back, and revisit that one lady that was in line for something other than a Nintendo. She wanted a Hatchimal, which the manager announced that they had two of. She was the only person in line that wanted this item, and she was number 12 or so back. The people in front of and behind me all asked, "What's a Hatchimal?"

While these people had no clue what it was, their greed instantly kicked in as they fired up their cell phones, and saw the asking price on ebay. The girlfriend, and one of the guys in the family bought the two Hatchimals that this one woman had gotten in line for. That's terrible. It's so awful and wrong that I'm sputtering over words because I just can't come up with something to describe how despicably greedy and...just wrong...that it was for these people to buy this item.

Has society gotten so greedy that we've chosen to forgo the simplest bit of courtesy for our fellow human beings? I guess I just don't understand how making a couple bucks off of something is more important than the joy an item will bring to someone else. For all we know, that person was in line for her daughter who was home in bed with some ailing disease, and she was just trying to bring a momentary smile to her face. Sure, that's an extreme example, and probably not the case, but do you see my point? People don't take two seconds to consider the person standing twenty feet behind them.

I'm truly sorry that this woman didn't get what she was there for. In hind sight, I wish I would have bought the last Hatchimal so I could turn around in line and hand it to the woman, and say, "I hope you enjoy it!" With my luck...She would have probably turned out to be a scalper too.

All of this comes back on the companies producing these items. Their incompetence to properly provide product to a public that clearly wants to hand them their money is unfathomable. For as long as I have been a collector, I've never understood why companies want to hand third party groups (ahem, scalpers) money that they could be putting in their own pockets. The solution is simple - Meet supply vs. demand.

The perfect example of all of this is the NES Classic. You have two million people (hypothetically) that want to give you their money to buy an NES Classic, yet you only produce one million consoles (hypothetically). You just passed on $60,000,000.00 because you couldn't be bothered to provide your product to those people. Either Nintendo is truly being run by incompetent people, or they simply don't care about their potential customers. Whichever option it is, neither of them are good business practices.

Even as someone who got an NES Classic Edition this morning, I can't help but feel angry about how this was handled. It angers me that as of this post there are over 3,000 consoles on ebay - clearly purchased by scalpers. It infuriates me that I had to stand in line with said people on a cold sidewalk as they talked openly about their intentions as if to scoff at those who would be "forced" to buy from them or one of their unknown cronies if they wanted one. To an extent, this also makes me angry at the people who support this type of behavior by buying from scalpers.

Additionally, it saddens me that for as many people who got one, there were numerous others told, "Sorry. Better luck next time." I'll even admit that part of the reason I'm bent out of shape is because I couldn't follow through with my initial plan, and purchase two more as Christmas gifts for my siblings because due to (lack of) supply everyone was limited one, and who knows when anymore will be available.

Thanks, Nintendo. Thanks for screwing up yet another highly anticipated release.

Click "HERE" to go back to the home page. For more posts related to this one, please click the labels below.
Posted by The Toy Box on November 11, 2016
Email ThisBlogThis!Share to TwitterShare to FacebookShare to Pinterest