Toy Biz's Video Game Super Stars is one of those diamond in the roughs type of toy lines. It was a great opportunity for gamers to collect figures based on some of their most favorite video game characters, and really paved the way for the massive abundence of said figures which we see fairly regularly on toy shelves these days. The biggest shame with the series is that Toy Biz hasn't continued it.

We've already covered the others which can be found "HERE" on our Toy Biz page, so unless something new starts hitting toy shelves in 2014 and beyond, this is unfortunately our last stop for the VGSS series.

Diddy Kong is a character made popular in the series Donkey Kong Country. Not only did this game help to bring this new character to light, but it brought the Donkey Kong series as a whole back to life in a way. It would never be comperable to the classic Donkey Kong title that started it all, but as its own series, developer Rare took great steps to ensure that everything came together perfectly in a solid game that spawned numerous sequels.

With Nintendo's craze for kart based racing games, soon Diddy Kong found the spotlight with Diddy Kong Racing for the Nintendo 64 in 1997. The game was highly successful for both Rare and Nintendo, and though a sequel was announced entitled Donkey Kong Racing, the game itself never went into development beyond a small rendering presentation trailer.

Two years after the game's release, Toy Biz produced an incredibly small line of figures. Each one came packed with its own racing kart which the figures easily fit inside of. It's disappointing that so few of the racers out of the potential eight were only produced. As a whole, it leaves the line probably the least desirable out of all the Video Game Super Stars series because it feels so incomplete. 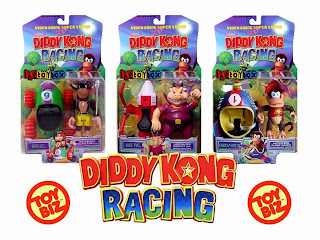 Join us next time when we take a look at E.T. The Extra-Terrestrial!

Click "HERE" to go back to the home page. For more posts related to this one, please click the labels below.
Posted by The Toy Box on May 15, 2014
Email ThisBlogThis!Share to TwitterShare to FacebookShare to Pinterest
Labels: 1990's, Diddy Kong Racing, Toy Biz, Video Game Super Stars