Do you want to talk about a series of action figures that are INCREDIBLY difficult to come by?  Then let's talk about the four figures based on the animated series Jackie Chan Adventures from Playmates toys.  It's as if nobody bought these, and as a result all the additional product was sent back to the factory and melted down.  Loose figures are just as difficult to obtain as carded ones, yet oddly when found they don't command a high price.  Carded figures sell for as little as fifteen dollars, and loose sell for even less.

So what's the deal?  Why is this series so hard to come by?  We wish me knew.  Suffice to say that if you're a collector who loves a challenge, then give finding a complete carded set of these a try. 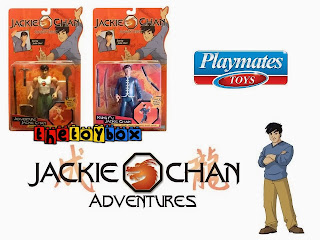 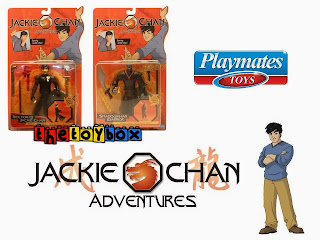 Three twelve inch dolls were also produced by Playmates Toys, however two were just larger versions of the four inch Adventure Jackie Chan and Section 13 Jackie Chan.  The other figure was a Training Jackie Chan.

Join us next time when we take a look at Sega Genesis!

Click "HERE" to go back to the home page. For more posts related to this one, please click the labels below.
Posted by The Toy Box on May 29, 2014
Email ThisBlogThis!Share to TwitterShare to FacebookShare to Pinterest
Labels: 2000's, Jackie Chan, Jackie Chan Adventures, Playmates Toys