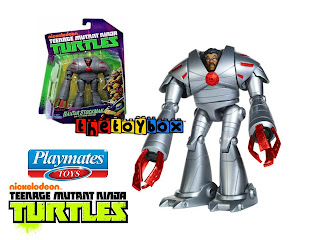 Baxter Stockman comes in his full armor with stolen T-Tech on his chest plate.    The figure has ball jointed arms and legs as well as slight articulation in the elbows and knees.  He also turns at the waist.

We really like the detail in the characters head and face.  It's spot on to its animated counterpart.  Though we do wish the glasses were sculpted away from the face as opposed to right against it.  It's a minor nitpick, but we've seen glasses on someone's head before, and they're not smack against their skin.

The most disappointing aspect to the figure is that it has all these little red claws, but none of them are articulated.  They're all just molded bits of plastic inserted into slots on the arm.  They're slightly flexible so that you could use them to grab the other figures, but at the same time it's a missed opportunity for the figure.

Some assembly is required for the figure as his feet are not attached when removing him from the package. 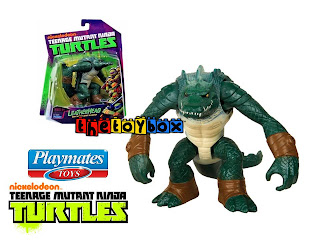 Leatherhead looks great, but sadly is not even close to the size he should be if you compare the cartoon series size ratio to the other characters.  In the new series, Leatherhead is at least two or three times the size of the Turtles.  At the very least the figure should have been the size of Dogpound.  In fact, until Spiderbytes is released, he's officially the smallest figure in the line.

Articulation wise, he is lacking considerably.  His arms and legs move on ball joint, and his head swivels in a circular motion.  His tail, which needs to be attached when removing the figure from the package, can also swivile in a circle.  It's very disappointing that the mouth can't open and close as even the original 1980's/1990's version had this ability.
Design and sculpt wise though, he's a pretty solid looking figure.  The green and brown really works well on the textures of the sculpt to make the details pop. 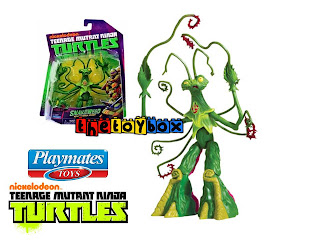 Snakeweed looks cool, and has the most articulation out of the three figures released for this wave.  His head swivles left and right, his arms and legs are on ball joint, his pincers swivel in a full circle, his knees bend up and down, and his torso is on a ball joint as well.  If that weren't impressive enough, he's also offically the largest figure in the line, but still off in terms of ratio based on TV series.

The various bits of "slithery" spindles and vine whips makes this figure pretty awesome to look at.  We're especially fond of the heart in the center of his chest, and the detail on the inner legs is a nice added touch.

What's interesting to note about this lot of figures is that the number sequencing for the item numbers skips a number.  This leads us to believe that Playmates may have initially had a fourth figure scheduled to be released, and pulled it.

The numbers are as follows;

Another thing worth noting is that the back of the packages for the Snakeweed and Baxter Stockman figures contain seventeen figures on them which includes the upcoming The Rat King and Cockroach Terminator.  These two figures are slatted for a July release, so it's interesting to see them being incorporated into the packaging now.  The question becomes, "Will they be released sooner?"  On the other hand, the Leatherhead figure package doesn't include these two figures, and only shows fifteen figures.  The question also becomes, will new packaging be produced for any of the figures?  Were the ones produced with Baxter and Snakeweed production errors?  Or will the Leatherhead package get updated to show all seventeen figures?  We'll keep you posted as to what we find out.

Variant hunters should make note that April O'Neil and Kraang have been re-released with this wave.  Though their packages (as well as the other old figures re-released) have not been updated with the new figures on the back, the bottoms now contain the additional safety mark.

Though several vehicles and a few playsets have been announced for 2013 we didn't see any on store shelves this time around.  If we see any in the upcoming weeks we'll incorporate them into this post.  Otherwise we'll hold off until we have the series four figures in our hands.

While this batch of figures is really lacking in the "action" sense of the phrase "action figure", the overall design and sculpt is amazing, and spot on to their cartoon counterparts.  While this may be a major turn off for most toy collectors, keep in mind that at $8.99 per figure (sometimes a little more), Playmates TMNT figures are still some of the more budget friendly figures on the market, and with that comes the sacrifice of articulation.

As for us, overall we've been rather impressed with what we've seen to date from the line.

Click "HERE" to go back to our home page.  For more posts related to this one, please click the labels below.
Posted by The Toy Box on April 20, 2013
Email ThisBlogThis!Share to TwitterShare to FacebookShare to Pinterest
Labels: 2010's, Nickelodeon, Playmates Toys, Teenage Mutant Ninja Turtles, TMNT