We may never understand what makes Napoleon Dynamite such a popular (or cult classic) film. We saw it. We chuckled a few times. However, we weren't falling out of our seat dying of laughter, nor did we walk away from the film feeling like we'd just seen the next Godfather or Apocalypse Now. It was mildly entertaining for a one and done viewing.

Regardless of our personal opinion, Napoleon Dynamite has become a cult classic in its own right. Fans love to quote it, and act as the character. Some even go so far as to dress up as him. To each their own.

In 2006 McFarlane Toys produced a small line of figures based on the film. Unfortunately as the film was released in 2004, the line somewhat missed its opportunity to capitalize on the height of the film's popularity. The end result was a line of figures which really appealed to a minimal fan base. However, because McFarlane Toys is notorious for under producing toys in an effort to produce scarcity, the line still managed to suffice for the fans who were looking for them. In other words, they weren't difficult to find.

There's no denying that there is quality here. One thing McFarlane Toys doesn't do is skimp on the detail. Each figure is spot on to their film counterpart - Even if three of the five figures are just variations of Napoleon himself. 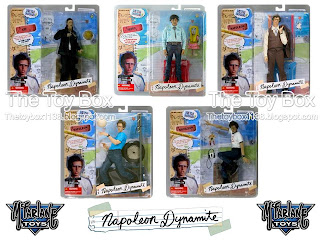 Unfortunately what the line does lack is articulation. Each character is sculpted in a permanent pose which with the exception of the head being able to turn left and right cannot be altered. If you're looking more so for Napoleon Dynamite based statues then this line is definitely suited to you.

Join us next time when we take a look at Kiss!

Click "HERE" to go back to the home page. For more posts related to this one, please click the labels below.
Posted by The Toy Box on April 04, 2013
Email ThisBlogThis!Share to TwitterShare to FacebookShare to Pinterest
Labels: 2000's, McFarlane Toys, Napoleon Dynamite