King Of The Hill (Toycom)

Some toy lines are designed to be short and sweet, and that's what I like about Toycom's approach to Fox's King of the Hill series.

The animated series King of the Hill, created and developed by Mike Judge (Beavis and Butthead) began in 1997, and ran until 2010 on Fox. During its run, the world got an inside look at the Hill Family, Hank, Peggy, and Bobby, as well as other reoccurring characters such as niece Luanne Platter, and best friends Dale Gribble, Bill Dauterive, and Boonhauer.

The series followed Hank though his daily routines of work at Strickland Propane, and was often times supplemented with misadventures of the characters as they made poor decisions on obvious life choices. It showcased white, middle class Texans in all their stereotypically glory.

In 2002, Toycom obtained the rights to produce a line of figures based on the characters. 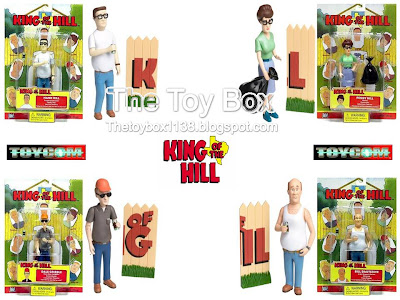 The toys came with zero articulation, and contained accessories as seen in the opening credits in the series, including the actual fence that Hank and the boys stand in front of to drink. However, because they were sculpted so accurately, and posed in positions as seen in the show's opening, this worked out well.

The packaging, while colorful, was cluttered. Between the artwork stretching from corner to corner, covered in sections by photo bubbles of other characters, there was just too much going on. A simpler approach of the artwork on front, and the characters on back would have made this packaging more appealing to the eye (from a collector's standpoint).

The first series released contained Hank and Peggy Hill, as well as their neighbors, Dale Gribble, and Bill Dauterive. 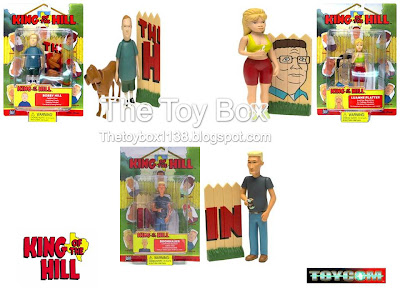 Released shortly after the first series, series two contained Bobby Hill with his dog Ladybird, Luanne Platter, and their gibberish talking neighbor, Boonhauer. The package are remained the same.

As you can see from the sections of the fence that were included with each figure, this entire series was planned from start to finish before the first figures even went into production. A respectable tactic, but also a disappointing one if the series doesn't pan out, and the remaining figures are never produced. Fortunately this paid off, and all seven planned figures were released. 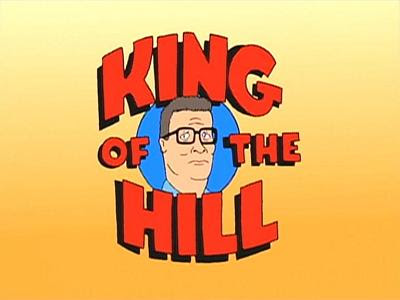 While you may look at the series and say, "Wow, that's a small set of toys," it works out rather well when you think about it. Toycom produced all the main characters of the show, cashed their checks from sales, and then moved on to bigger and better things. They didn't milk the series for every dime they could get. They didn't continue to produce secondary characters until interest dwindled, and toys cluttered the clearance isles. They had a plan, they followed through, and delivered a great set of toys based on the hit show. What more can you ask?

Toycom's King of the Hill figures may not be the biggest set of toys out there, but they certainly are one of the best.

Join us next time for our look at Sega Master System!

Posted by OK Records 1138 on July 12, 2012
Email ThisBlogThis!Share to TwitterShare to FacebookShare to Pinterest
Labels: 2000's, King of the Hill, Mike Judge, Toycom