http://support.xbox.com/support/en/us/nxe/kb.aspx?ID=958957&lcid=1033&category=live
One of the things that make the Inhumanoids line stand out from the rest is that the name of the series is actually that of the bad guys. The good guys of the series were actually an Earth faction known as Earth Corps, and they did battle against the trio of subterranean monsters called the Inhumanoids - All of this while being aided by the elemental beings, the Mutores.

Unlike most cartoon series which were given a thirty minute spotlight (okay, twenty-two after commercials) via Saturday morning cartoons or daily syndicated shows, Inhumanoids was part of the Super Sunday which allotted four shows eight to nine minutes each to tell a short serial like show that continued in each episode. The four shows included in Super Sunday were Inhumanoids, Jem and the Holograms, Bigfoot and the Muscle Machines, and Robotix. Jem and the Holograms would eventually spawn its own series, becoming the most popular of the four mini shows.

Though Inhumanoids did spawn its own series which ran for thirteen episodes, it never saw the success that Jem and the Holograms saw, which ran for sixty-five episodes. Still, it had its loyal following of child fans, and as a result a toy line was also produced.

Hasbro focused mainly on the bad guys, and unfortunately relied on repainted characters with new names to pad the series. Three different sets of "figures" were produced, all designated by their size; 6, 7 and 14 inches. 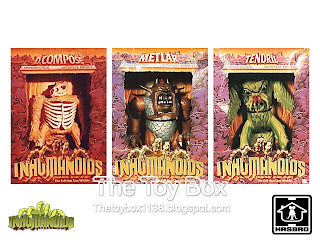 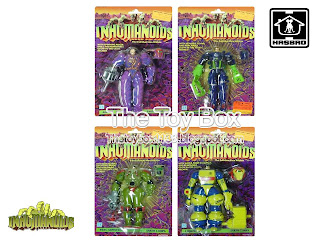 The seven inch figures were more Inhumanoids, but focused a lot on repainting the same characters, while at the same time giving them different names. They included; Granite the Race, Granok, Magnokor, Redlen, Redsun, and Redwood the Race. 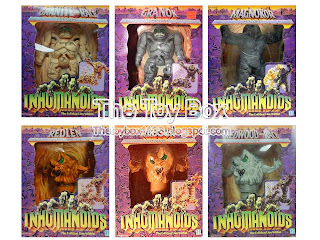 The final pieces released for the series were the two vehicles; Terrascout and Trappeur. They were designed strictly to be used with the six inch Earth Corps figures. 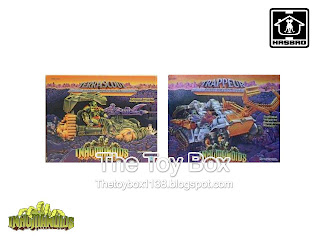 Despite having a mildly successful television series, Inhumanoids are fairly unknown to mainstream collectors. Despite this, the secondary market has been kind to the series. Fourteen inch "figures" can fetch as much as $100.00, loose. Mint in box ones are incredibly rare, and fetch considerably more. The six inch figures command $20.00 to $50.00 for loose figures, and can fetch as much as $75.00 or more for mint in package ones. The seven inch "figures" don't do as well, and can sell for as little as $3.00 (loose) a piece, and range from $20.00 to $30.00 each for mint in box ones. Finally, the vehicles range in price from $20.00 to $50.00 for mint in box items, however their prices seem to fluctuate from week to week.

Join us next time when we take a look at King of the Hill!

Click "HERE" to go back to the home page. For more posts related to this one, please click the labels below.
Posted by The Toy Box on July 09, 2012
Email ThisBlogThis!Share to TwitterShare to FacebookShare to Pinterest
Labels: 1980's, Hasbro, Inhumanoids, Super Sunday