There's something to be said about someone that would purchase an everyday average rock - The word stupid comes to mind. Nevertheless, Gary Dahl proved to the world that it wasn't about having a good idea, but rather that idiots with too much money will buy anything. Thus, the Pet Rock was born. 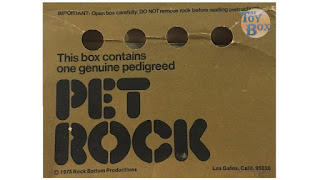 In 1975 Dahl was at a bar with his friends listening to them bicker about their live pets. Complaints about walking them, feeding them, changing litter boxes and so on lead Gary to the idea that a rock would be the ultimate pet. You wouldn't have to feed it, walk it, bathe it, or in general take care of it at all. Though his friends laughed at the idea, Gary was far from joking. He went to work on penning a manual for taking care of your new found pet.

Pet Rocks were smooth stones which were obtained from Mexico's Rosarito Beach. Each came with a custom cardboard box which had air holes in the sides, and of course the manual Gary had written.

The fad of Pet Rock lasted about six months, but it was more than enough time for Gary to sell 1.5 million of them at $4.00 each making him a millionaire in the process. Is anyone else shaking their heads?

To be fair, the rock itself was a gag, with the manual being the real product. Though it could have been sold as its own "book" so to speak, you really need the rock with it to bring the whole comedic concept to a head.

With his new found fortune, Gary ended up designing and building a bar in Los Gatos, California called Carry Nations. Sadly, kids of this generation that stop by for a drink probably have no clue who he even was.

Dahl continued to work in advertising throughout his years, but for a long time avoided interviews because of what he called, "A bunch of wackos appearing out of nowhere with threats and lawsuits." He retired in 2006, and sadly passed away at the age of 78 in 2016.

Rosebud Entertainment are the current rights holders to Pet Rock, and since 2012 have been producing them again. I guess as a society we'll never learn. As George Santayana said, "Those who do not learn history are doomed to repeat it."

Click "HERE" to go back to the home page. For more posts related to this one, please click the labels below.
Posted by The Toy Box on July 17, 2017
Email ThisBlogThis!Share to TwitterShare to FacebookShare to Pinterest
Labels: 1970's, Gary Dahl, Pet Rock, Rock Bottom Productions, Rosebud Entertainment