Before we start - For those of you confused by our brief posting the other day about it being May, and Free Comic Book Day being right around the corner, fret not. We haven't gone insane. We don't think it's May. We actually work well far in advance here at The Toy Box, and that was a post we already have in the works for May of 2018. So, check back in about a year for that one! It'll be here sooner than you think (sadly).

We often wonder what it's like to be sitting around your house one day as a struggling writer, have your phone ring, and be told by your agent, "Hey, you're now a millionaire." That's pretty much how it went for Stephen King when his agent called him and told him that his very first novel, Carrie, was a best seller. 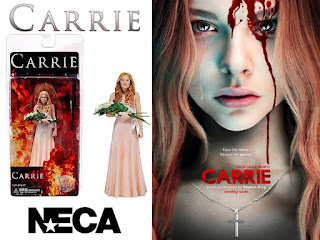 Mind you, this figure of Carrie White isn't the iteration portrayed by Sissy Spacek in the 1976 classic film, but actually the rebooted version played by Chloe Grace Moretz in 2013. Not a bad thing - Just stating for a matter of reference.

The figures were produced in 2013, and much to the standards of NECA was a one off (with a variant of course). Carrie can be found in both her white prom dress with a bouquet of flowers, or her not so white anymore prom dress covered in blood. For those of you familiar with the film, you know this is because the gag of all the cool kids at prom was to get Carrie elected prom queen, then douse her with pig's blood while accepting her crown. She then quirks out, and we see that Carrie has a supernatural power to eradicate anyone she wants. For those of you who haven't seen it...well, that's what happens. Sorry for spoiling it for you. 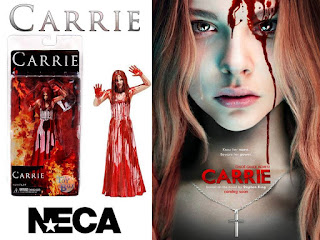 This is really a niche demographic item, so it's no surprise that the figure was a relatively large bust on store shelves. Many second hand dealers are trying to offload these, but sadly are pricing them too high to make them desirable to your average collector. Between $10.00 and $15.00 is what people are willing to pay for both the standard and bloody version. However, most dealers are asking for $20.00 for the standard edition, and upwards of $30.00 or more for the bloody variant. This makes the figure a no sale scenario for most.

If you're looking to add this figure to your collection you face one of the most difficult challenges of collecting - Finding a seller who knows what the figure is reasonably selling for to get it at a fair price. Patience will be a virtue here.

Click "HERE" to go back to the home page. For more posts related to this one, please click the labels below.
Posted by The Toy Box on June 19, 2017
Email ThisBlogThis!Share to TwitterShare to FacebookShare to Pinterest
Labels: 2010's, Carrie, NECA, Stephen King