Once Upon A Zombie (WowWee)

Before we jump into today's post, we'd like to share a fun video we found on Youtube where the cast of the 1960's Batman television series played against the cast of Gilligan's Island on Family Feud. Man, that Richard Dawson was quite the ladies man. Check it out, and try to count how many kisses he gets from Mary Ann and Catwoman! Lucky dog!

Once Upon A Zombie
WowWee
2013

We don't touch much on (what would be considered) girls toys (by most). However, we do appreciate a good "doll" line. Especially when it's not one hyper fixated on living in a dream world where everything is catered to you in pink fashion. You know who we're talking about. 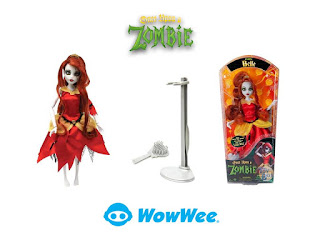 Once Upon A Zomibe may be cliche in its zombie theme, but it works in a way. The dolls are based on the book which was intended to be a trilogy by author Billy Phillips. However, to date it appears that only book one has ever been released, and that was back in October of 2015. Will book two ever see the light of day (let alone book three)? Seems doubtful, but we've been wrong before.

Regardless, the book(s) aren't what we're here to focus on, but rather the characters that were produced in doll fashion by WowWee. 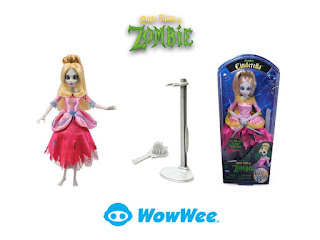 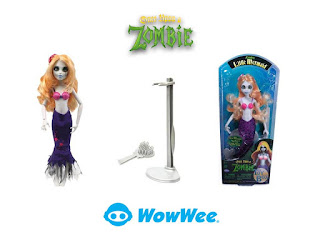 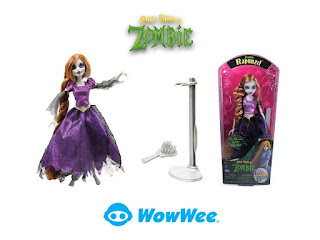 The dolls have very meticulous details to them which make them stand out significantly from your average girl's toy. For starters, the paint deco on the scars and stitching is amazing. Not only that, but the glass eyes and rooted eyelashes give them a quality that most dolls just don't have these days. If there was one complaint to be had, the paint tones could have been mixed up more to show a more decaying corpse than just a reject pale vampire. These are zombies after all.

There are definite hints of Disney inspired themes in the dolls. Specifically their clothing (look at Snow White specifically). However, these are not a Disney iteration, nor are they intended to be. These are designed to be zombie versions of their classic fairy tale counterparts, and for the most part that's what you get here. 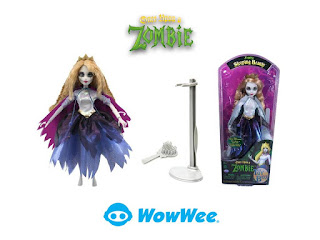 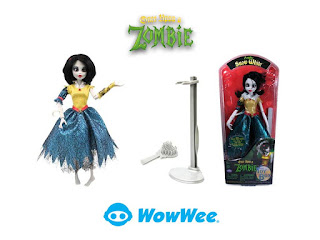 Speaking of the clothing, a lot of detail went into each dress as well. They each have a jagged edge theme to them, which only drives the "horror" theme all the more. Each one also has strategically placed wear and tear incorporated into it - Such as holes.

Unfortunately with the series seemingly dead (no pun intended), there is little movement in the dolls on secondary markets. The dolls sell for roughly $20.00 to $30.00 here and there, but sadly there is more supply than demand. This could be a good thing if this is a series you're interest in getting into, and want to do so for as little as possible.

Click "HERE" to go back to the home page. For more posts related to this one, please click the labels below.
Posted by The Toy Box on June 26, 2017
Email ThisBlogThis!Share to TwitterShare to FacebookShare to Pinterest
Labels: 2010's, Disney, Once Upon A Zombie, WowWee