Despite the mixed reviews from fans, Identity Crisis managed to become one of the highest selling story arcs for DC Comics in 2004.  Some fans praised the strong themes introduced in the seven issue mini series, while others were quick to lash out at the strong sexual themes which they felt didn't belong in the DC universe - Specifically in the realm of the Justice League.  The story focuses strongly on murder, and has a sub plot reference to rape themes, leaving the story one that is definitely geared more towards mature readers.

Though the story is highly praised by comic book critics, the artwork didn't receive the same reception.  One such critic, Dominic Organ of Comic Bulletin, was critical of the artwork stating that it was, "Incredibly spotty in places," inconsistent and, "At times it was down right ugly."

In 2006, DC Direct revisited the Identity Crisis mini series in plastic format with their ten figures based on the story.  The series offered many DC characters who to date were never made available to collectors.  Despite the comic series itself meeting mixed reviews, the figures were widely popular among fans. 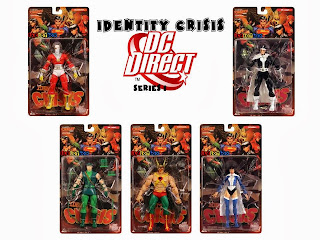 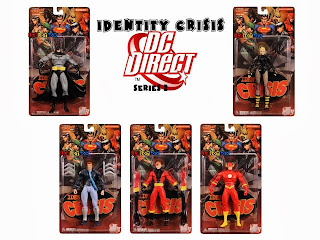 Join us next time when we take a look at Magic the Gathering - Alpha!

Click "HERE" to go back to the home page. For more posts related to this one, please click the labels below.
Posted by The Toy Box on February 13, 2014
Email ThisBlogThis!Share to TwitterShare to FacebookShare to Pinterest
Labels: 2000's, DC Comics, DC Direct, Identity Crisis