Today's toy hunting paid off in a big way!  We came across the all new Nickelodeon's Teenage Mutant Ninja Turtles figures for series four as well as the all new figures for the sub series Stealth Tech.  What a great day! 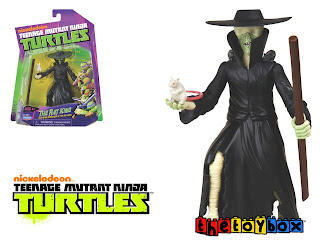 First up is The Rat King (item number 90515).  This figure is horrifically awesome.  Each inch of him is spot on to his cartoon counterpart, and we love the little white rat which fits in the palm of his hand - Though the tail is a little too long.  There are also a few black rats which are sculpted to his coat - one on the left arm, and one on each shoulder.  These add a really nice touch to the figure, but because they are the same color as the coat tend to blend in a little too much.

Sadly, the hat doesn't come off, and nor does the coat - Unless you're adamant about it, and go to town on the figure with a pair of scissors.  Another disappointment is his left hand which is sculpted closed.  It does the trick for holding his included "staff", but servers no other purpose as a result. 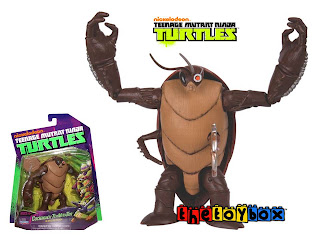 The second, and final figure from series four is Cockroach Terminator (item number 90525).  Playmates Toys is really starting to skip item numbers now, so we're definitely wondering what toys were assigned to these missed numbers, if any.

The design of Cockroach Terminator is a little lazy.  Specifically how the saw is incorporated into it.  There is literally a hole that goes from the front of the figure, through the figure, and out the back, and you simply run it through it, with nothing but gravity to hold it in place.  Like we said, it's a really lazy design.

Some assembly is required as the antenna on his head need to be attached.  Speaking of his head, it's very stiff, and takes some muscle to get it to turn in a full 360 motion.  The arms are on a ball joint which allow for full up and down, left to right motion, and a nice added touch was that his elbows also have a joint in them.  Legs are also on a ball joint at the hip, but beyond that there's no articulation in the legs.  All and all, he's not a bad figure. 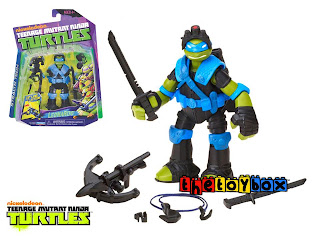 In addition to the two "basic" line figures, Playmates Toys also released a new sub series of figures entitled "Stealth Tech".  As of now, the only figures available in this line are the four Turtles; Leonardo, Michelangelo, Donatello and Raphael.  It's possible that much like the Mutagen Ooze line, these could be the only figures produced for the series.

Since all four turtles are basically the same, we're going to review them as a whole, and only focus on the accessories individually - As the figures themselves unfortunately don't have much variation between them.  That's not to say that they're necessarily bad figures though.  Personally we think their a hundred times more interesting than the poorly made Mutagen Ooze sub series. 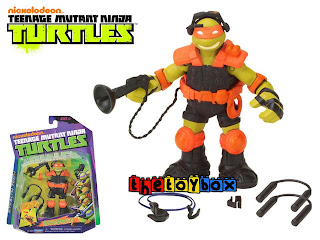 Articulation wise, each figure has a 360 degree turning head, and ball joints at the should to allow up and down and right to left movement.  The elbows also bend, and can swivel to get some great poses out of each Turtle.

Unlike the Mutagen Ooze figures which had no articulation in the legs beyond moving slightly up and down, the Stealth Tech figures feature ball joints at the waist which allow for a full range of articulation.  They also have a joint at the knees which allows for slight bending and movement - Though the leg pads do hinder this slightly.

As we said above, the articulation is far superior to the last sub series line, and really makes these figures more desirable in terms of playing with them. 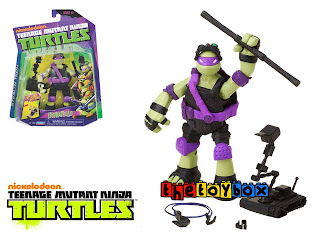 The accessories are where each turtle really shows their uniqueness from each other.  Each Turtle comes with their iconic weapons.  Leonardo has his Katana Swords, Michelangelo his Nunchucks, Donatello his Bo Staff, and Raphael his Sais - Each of which has been uniquely sculpted and painted black.

Each figure comes with a pair of "flip-up" night vision goggles - Though Michelangelo's are a little unique as his also come with a headset.  A climbing rope which can be used to hang the figure from various objects around the house is also included. 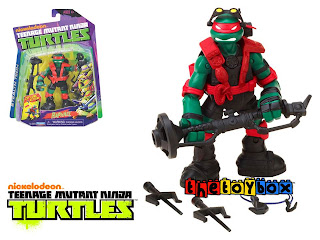 For those of you interested in the item numbers, they are as follows;

The packages also included a small circular sticker at the top which advertises an exclusive video game unlock code inside - the "Tiny Turtles".  What game?  We have no clue.

Variant hunters should note that we also saw the four original Turtles with this sticker on the packaging, but no others - So we don't know if the other figures (beyond the Turtles) have codes inside the packaging or not.

And, with that, there's another wave of figures for the highly popular Nickelodeon's Teenage Mutant Ninja Turtles hitting store shelves now.  We'll keep you posted on any future finds.  For those of you who missed out on the Classics line which introduced larger versions of the four Turtles done up in their original cartoon format, we saw these on the shelf as well - Though no Rocksteady or Bebop yet.

In December of 2013, Playmates Toys updated Cockroach Terminator with a fantastic paint job, and re-released the figure with their basic assortment. 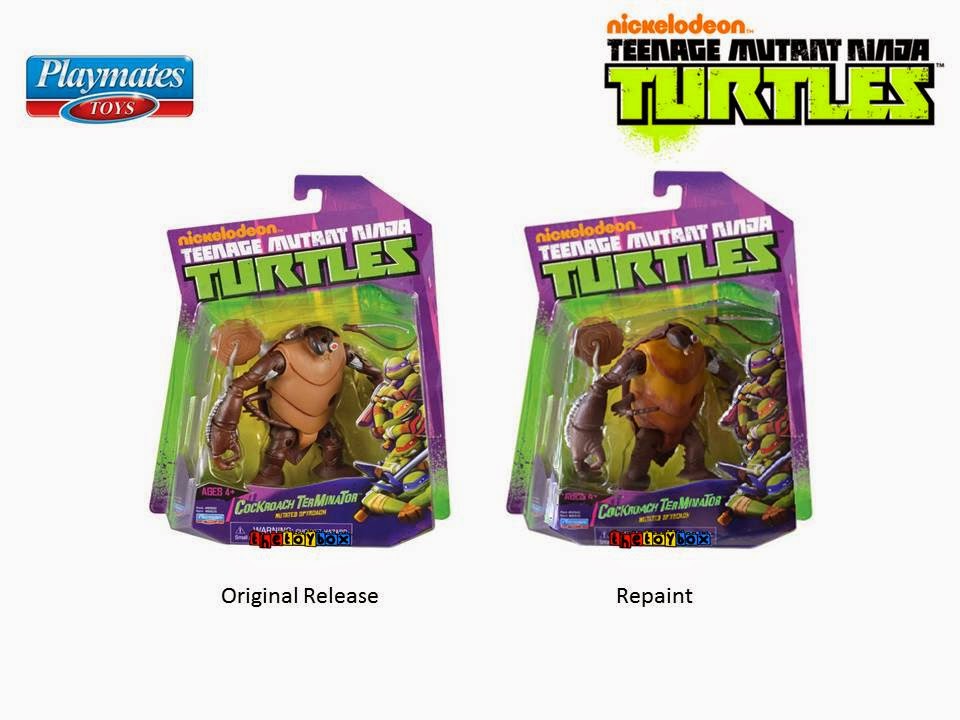 In addition, the Stealth Tech figures have seen not one, but two re-releases with slight production changes. The first change came in November 2013 when the zip lines, which were originally packed in at the top right corner of the package, were removed and discontinued. Safety hazard? Cost cutting measure? We've reached out to Playmates Toys for a definitive answer and will let you know if/when we hear from them.

The second change was the packaging itself. When the figures were released a third time, the "Stealth Tech" banners were removed. These versions seem to be far more difficult to track down than the prior released versions. Like the second release, these figures also don't have the zip line included. 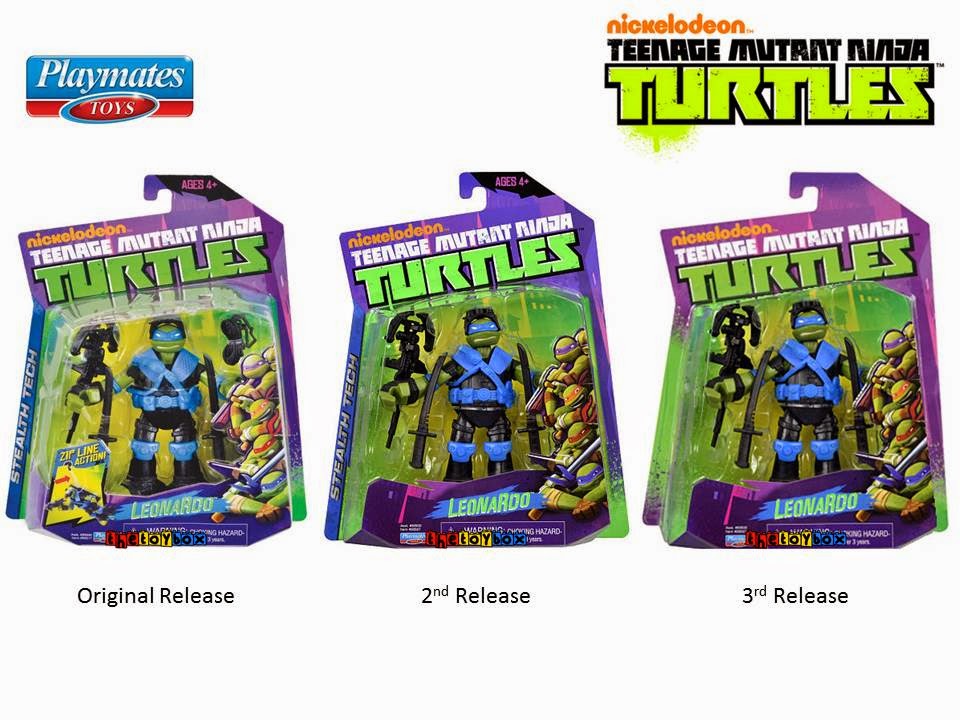 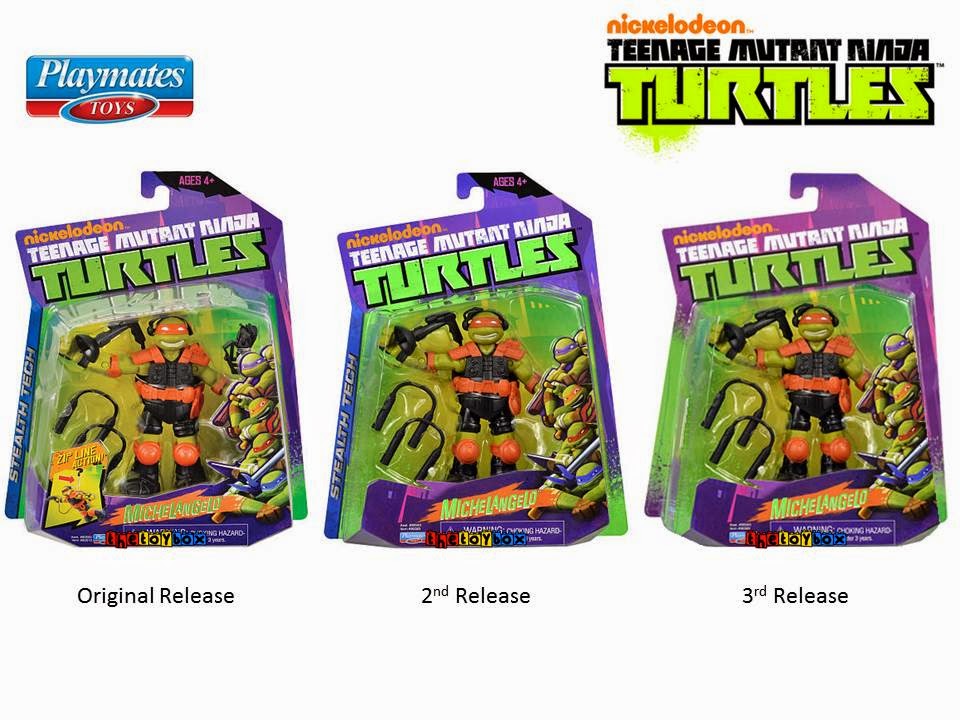 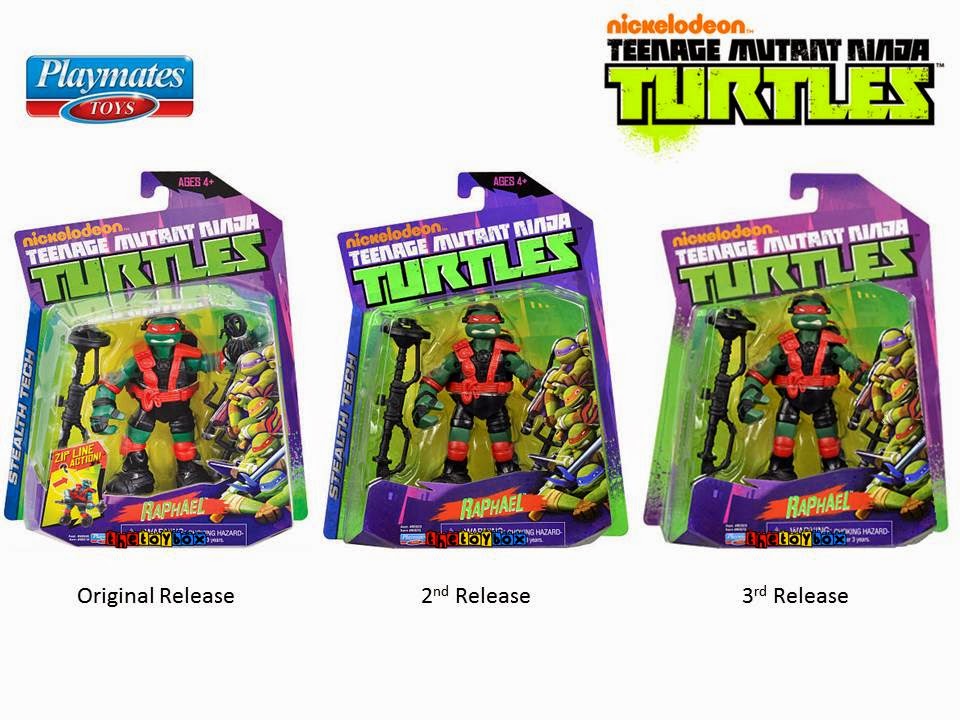 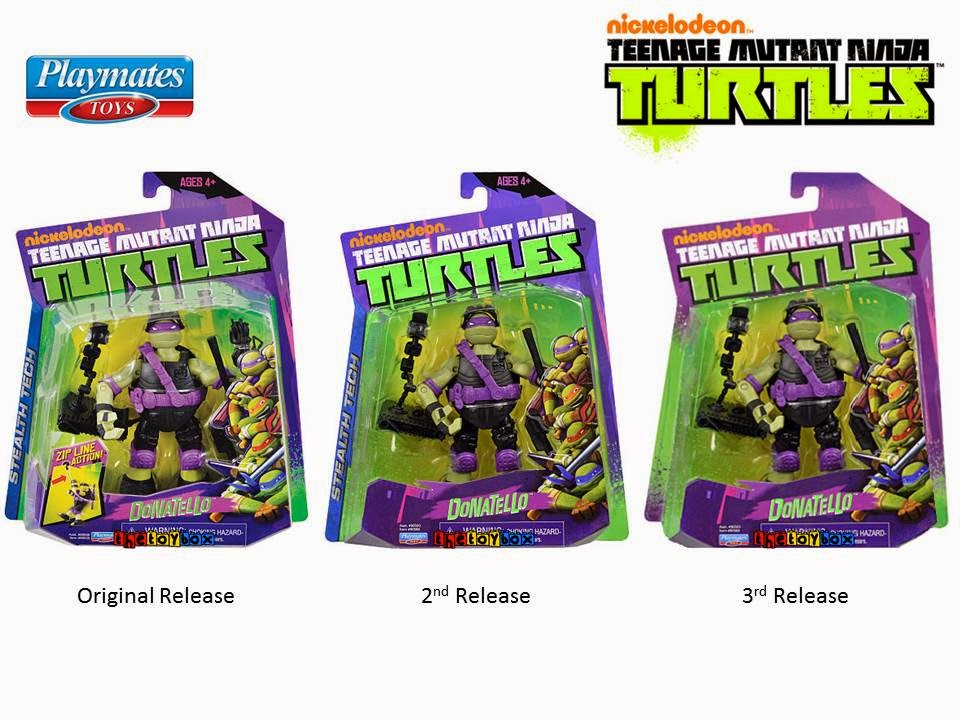 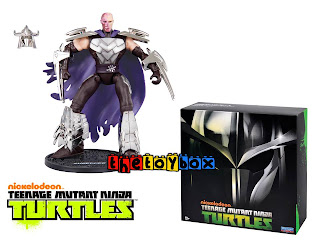 While it's not technically a part of series four, because it's release coincides with the time frame of the series, we thought it appropriate to post him here.  Yes, the 2013 San Diego Comic Con exclusive Shredder is available now that the Con is in full swing.

Articulation wise, his head can swivel, and his arms are on ball joints at the shoulder, and swivels at the wrist.  His waist moves left and right, and the legs feature ball joints at the hips, as well as knee joints.  All and all, not bad.

It sells for about thirty-eight bucks at the show, and will most likely fetch anywhere from fifty to seventy-five bucks on secondary markets - At least for now until demand dies down.  Though we don't recommend immediately jumping at the secondary market ones as the last SDCC exclusive - Night Shadow Leonardo was also made available on Playmates Toys site shortly after the convention at a more reasonable forty dollars.  This of course dropped to around twenty-five dollars when sales ceased, and the toy eventually sold out.  I guess what we're saying is WAIT if you're not physically at the convention to get it.

In closing, it is important to note that it has been confirmed that this figure will also be released via retail, though the retail version won't feature any of the vac metal armor.  So unless you absolutely need to the shiny metal feature, wait for retail.

Click "HERE" to go back to the home page. For more posts related to this one, please click the labels below.
Posted by The Toy Box on July 17, 2013
Email ThisBlogThis!Share to TwitterShare to FacebookShare to Pinterest
Labels: 2010's, Nickelodeon, Playmates Toys, Teenage Mutant Ninja Turtles, TMNT