In 1991 Robin Hood: Prince of Thieves opened in movie theaters across the U.S., and was an overnight success. Doubters of Costner's ability to play the rogue in green were silenced immediately. Personally I thought the movie was okay for a viewing, but wouldn't go out of my way to see the film again. 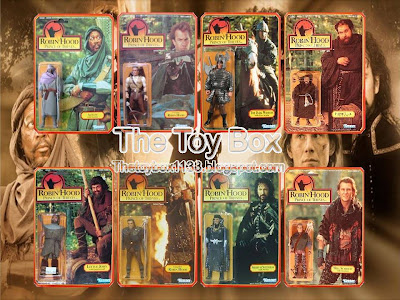 Kenner produced a small line of figures to coincide with the film's release. Designed in the same fashion as Kenner was accustomed to, the figures had little articulation, and poorly resembled the actors who portrayed them.

The package design was also fairly standard for Kenner's MO. A colorful photo of the actual actor stood to the side of the bubbled figure, all of which was encased inside of a red border which surrounded the entire card.

There are two known variations from this particular toy line, and both are for each of the two Robin Hood figures. One variation (supposedly) resembles Kevin Costner, while the second is simply a molded standard head for the figure which is not meant to resemble anyone living or deceased.

The majority of the main characters are available in the first and only series, but some key characters are definitely missing such as Maid Marion, Mortianna, Guy of Gisborne, and Duncan. It's unknown if a second series was ever planned as sales never warranted further figures. 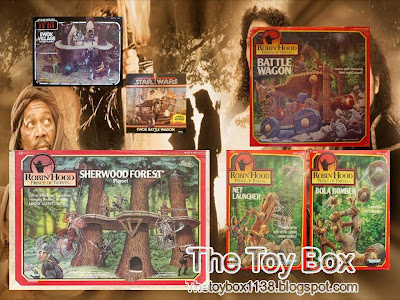 As you look at my photo of the vehicles and playsets, you may think I've made some kind of mistake by including two Star Wars items. But, look closer. The Sherwood Forest playset is clearly a repainted Ewok Village (from the Return of the Jedi line), and the Battle Wagon is just a repainted Ewok Battle Wagon (from the Power of the Force line). I guess Kenner figured why design something new when they already had "perfect" designs for toys already drafted up that would fit in the realm of Robin Hood.

What's great about this collection of toys is that not only are they easy to get, they're relatively cheap. I've seen complete collections which include all eight figures, plus the two variant Robin Hood figures, all three vehicles, and the playset all in sealed boxes/packages for as little as $175.00.

If you're looking to get your hands on a unique collection of toys, this is certainly one to consider. Everyone remembers the movie - Not many know about the toys. Think of the conversation piece this series would potentially have.