Way before Legos (1949) and a Duplo Blocks (1969), educational toys such as the one's showcased in the title were all the rave among parents looking to stimulate their children's minds while at the same time providing them with quality toys that were fun, and would survive the test of might that children so often put on their toys. This week, we're going to take a look at three of those toys that to this day still stand as an iconic staple in homes. 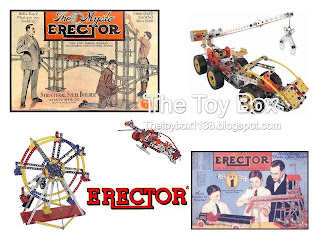 Born in Salem, Oregon in 1884. A. C. Gilbert (1884-1962), boyhood love was magic tricks: he became so proficient that he once matched a traveling professional magician trick for trick, and earned the prescient praise, Gilbert was also a brilliant student, and soon went on to Yale Medical School. He helped pay his tuition by performing as a magician, and founded a company, Mysto Manufacturing, which sold magic kits for kids. In 1909, Gilbert finished medical school, but decided to expand his budding toy business rather than practice as a doctor.
Like many residents of New Haven, Connecticut, he often took the train to New York City; and on one trip in 1911 he was inspired with what would be the most popular of his dozens of inventions.

Watching out the train window as some workmen positioned and riveted the steel beams of an electrical power-line tower, Gilbert decided to create a children's construction kit: not just a toy, but an assemblage of metal beams with evenly spaced holes for bolts to pass through, screws, bolts, pulleys, gears and eventually even engines. A British toy company called Meccano Company was then selling a similar kit, but Gilbert's Erector set was more realistic and had a number of technical advantages --- most notably, steel beams that were not flat but bent lengthwise at a 90-degree angle, so that four of them nested side-to-side formed a very sturdy, square, hollow support beam.

Gilbert began selling the "Mysto Erector Structural Steel Builder" in 1913, backed by the first major American ad campaign for a toy. The Erector set quickly became one of the most popular toys of all time: living rooms across the country were transformed into miniature metropoles, filled with skyscrapers, bridges and railways. Those kids who already owned a set would beg Santa annually for an upgrade, aiming for the elusive "No. 12 1/2" deluxe kit that came with blueprints for the "Mysterious Walking Giant" robot. It is difficult for anyone under the age of 35 today to appreciate just how popular the Erector set was for over half a century.

A. C. Gilbert was one of the most multi-talented inventors of all time. With many fields open to his ingenuity, he chose to educate and entertain children through toys. 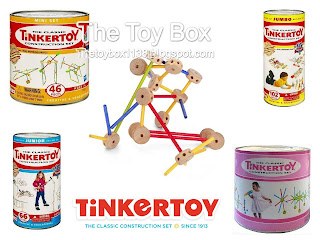 The possibilities for construction play are endless with Tinkertoy Construction Sets. In 1992, to freshen up in preparation for the big 80 birthday event, Playskool unveiled a major redesign to this classic toy of motion and construction. The new, all-plastic Tinkertoy sets feature brightly-colored, easy-to-assemble parts that allow kids to build bigger structures than ever before. Each set includes instructions to create vehicles that really roll, tall towers and even free moving Ferris Wheels.

Tinkertoy Construction Sets are the invention of Charles Pajeau, a stonemason from Evanston, Illinois who established The Toy Tinkers company. Inspired by watching children play with pencils, sticks and empty spools of thread, Pajeau developed several basic wooden parts which children could assemble in a variety of three dimensional abstract ways. He designed his first set in his garage, and with high hopes, displayed the toy at the 1914 American Toy Fair. But nobody was interested. He tried his marketing skills again at Christmas time. He hired several midgets, dressed them in elf costumes, and had them play with "Tinker Toys" in a display window at a Chicago department store. This publicity stunt made all the difference in the world. A year later, over a million sets had been sold. Playskool acquired the Tinkertoy line from Child Guidance in 1985. 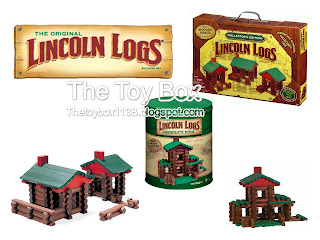 In the 1910s, American builders were busy on construction sites in the city and in the playroom. Introduced just after Tinkertoys and the Erector Set, Lincoln Logs were yet another construction toy to make it big during the decade. John Lloyd Wright, son of architect Frank Lloyd Wright, brought out the line of sturdy, interlocking logs in 1916. Wright claimed that the foundation of Tokyo’s earthquake-proof Imperial Hotel, which he saw while it was under construction, inspired the shape of his logs.

Lincoln Logs turned out to be a toymaker’s dream. The original sets were an instant success, and after World War II, sales of Lincoln Logs got another boost from the baby boom. The sets were popular among postwar parents because they were more sophisticated than plain building blocks but still challenged children’s powers of concentration and eye-hand coordination. Ironically, Lincoln Logs—long a favorite of proponents of educational toys—were among the first toys to be promoted on a television show, 1953’s Pioneer Playhouse. The ads targeted affluent parents, who were most likely to own a television set and to buy educational toys.

It's simply amazing to see toys on the market today that have withstood the test of time of (nearly) a century. As a child of the 80's, I've seen tons of toy lines come and go. To see something from before my time on this Earth, and as simple as Lincoln Logs still selling well on the market today makes one take a step back and say, "Perhaps simple is better."