In 1989 Warner Brothers released the highly successful Batman film. The movie not only showed the general public that a film based off comic book heroes can be a blockbuster success, while at the same time launched both Tim Burton and Michael Keaton into orbit as high status celebrities in Hollywood. Jack Nicholson was of course already there.

Toy Biz quickly followed the success of the film with a set of toys. 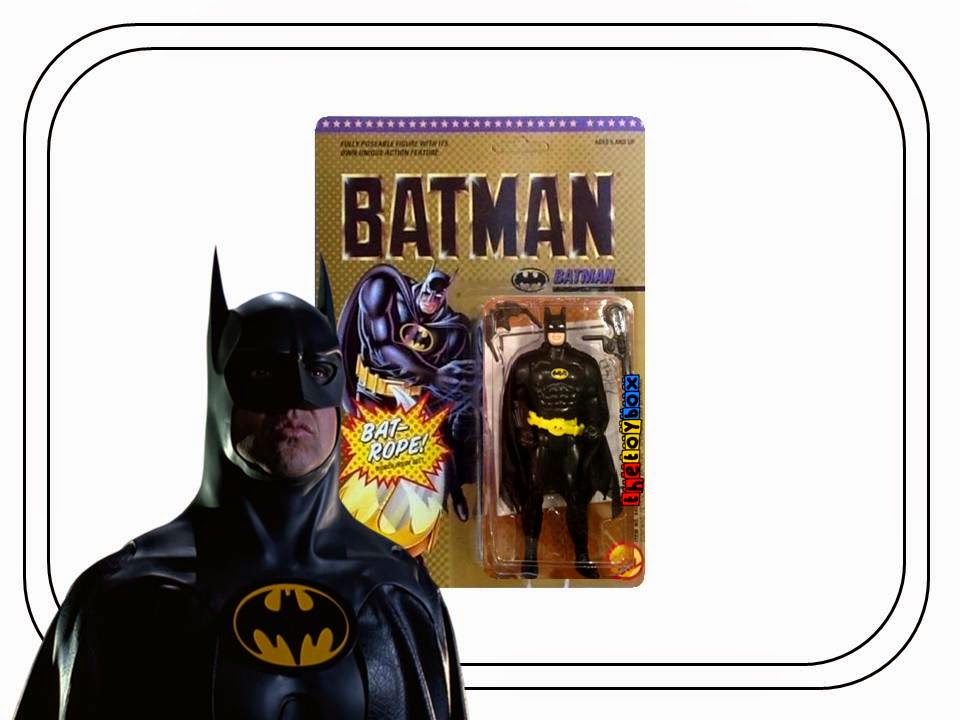 The series of figures were as small as they come. Only three figures were produced, along with several resculpts. Batman himself had three different versions; a Michael Keaton version, a square face version, and a rounded face version. The Joker had two different versions, one with a painted on curl of hair on his forehead, and the other with no curl. The final figure, Bob the Goon was released to complete the series.

Batman's figure included a long retractable string that allowed you to use it as a grapple hook. The Joker had a tube and small plastic water bottle that could be attached to the back of the figure. A squeeze of the bottle shot water out of the Joker's lapel flower. Bob the Goon offered no interactive play. 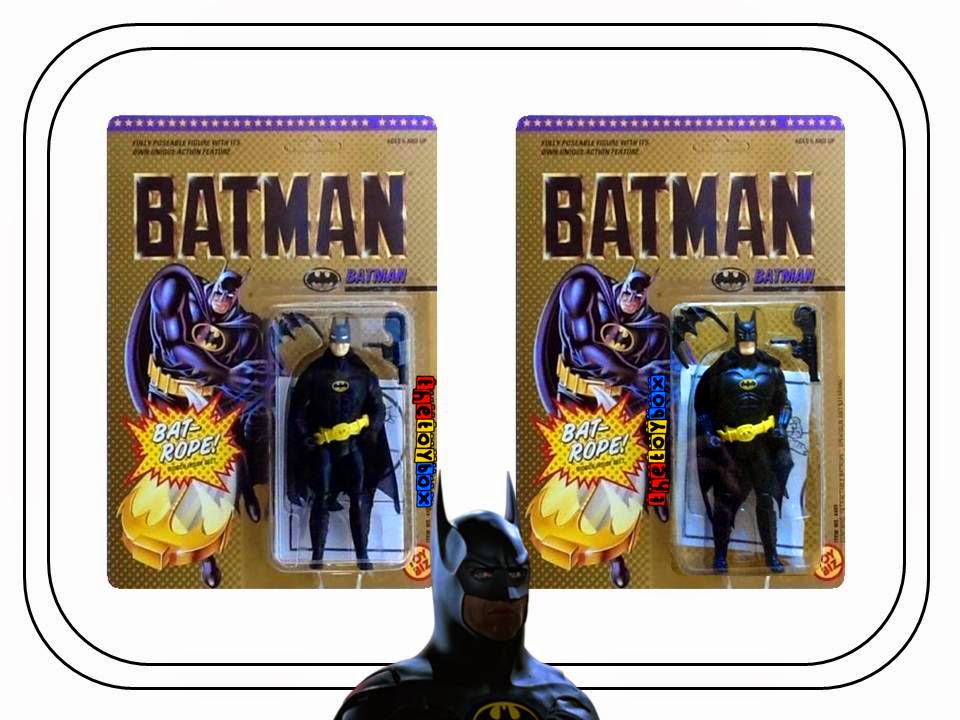 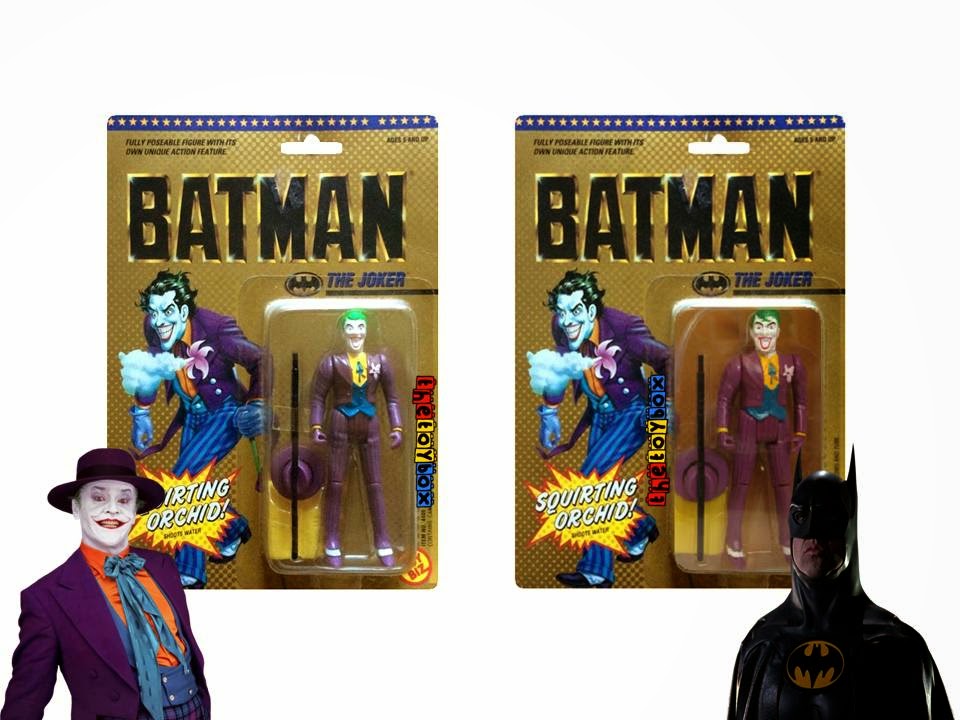 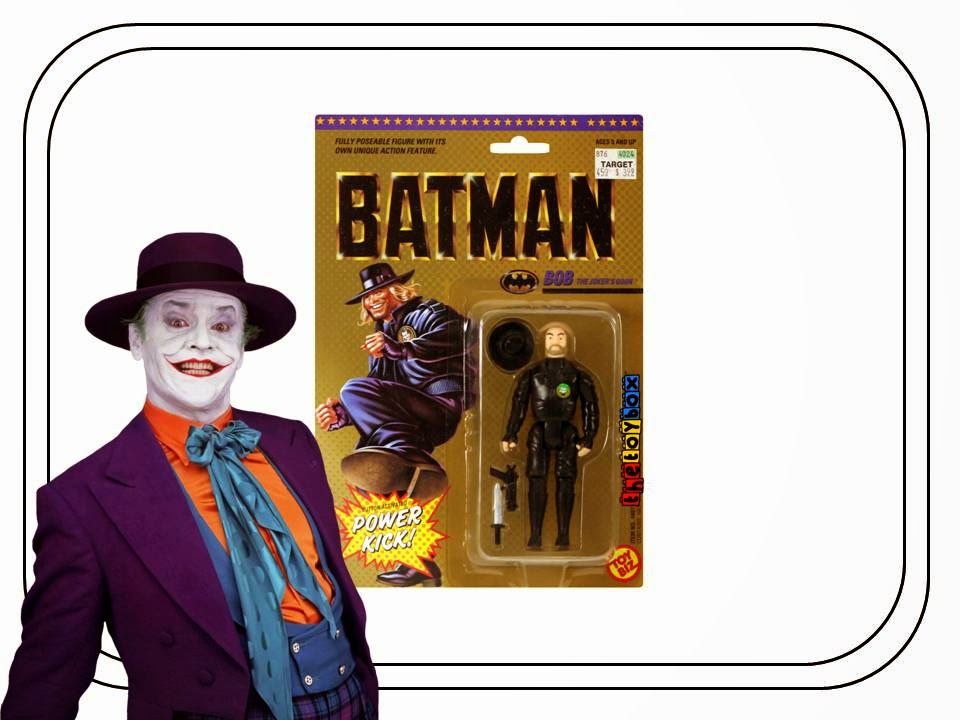 We never saw an Alfred the Butler, Vicki Vale, or Knox figures. Nor is it even known if Toy Biz had any plans to produce them. However, it is a shame that more figures were never produced. 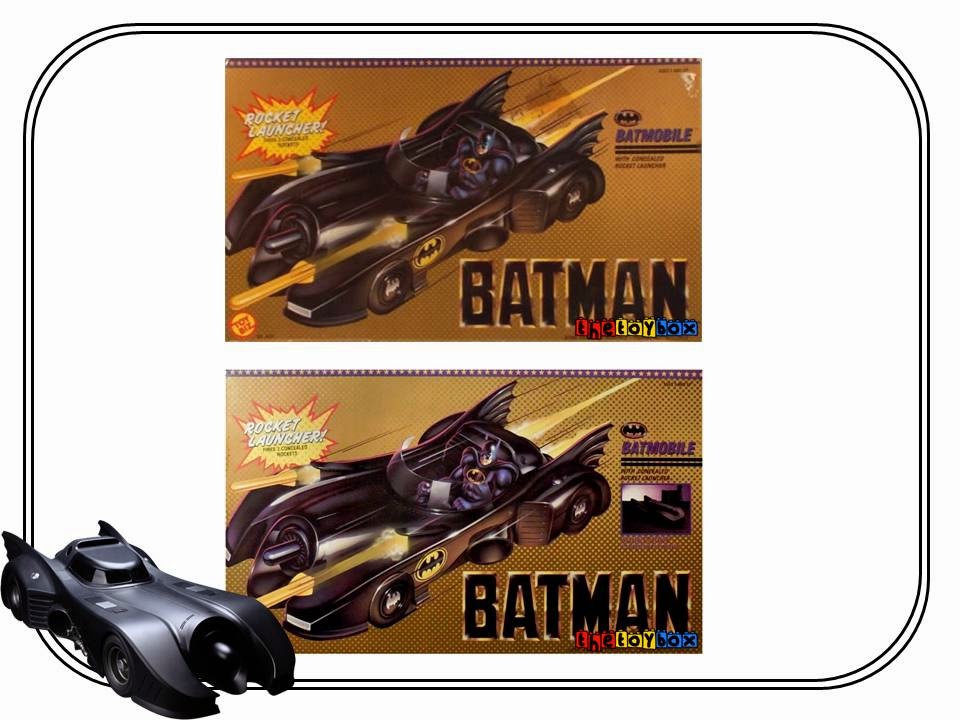 The Batmobile and Batwing are probably some of the best toys based on these iconic Batman vehicles to date. They were meticulously sculpted to match their counterparts as seen in the film. One version of the Batmobile (there were two) even came with a plastic overlay shell to mimic the vehicle being in "shield" mode.

Though never seen in the film, the Batcycle was a wonderfully detailed toy. While not as interactive as the Batmobile and Batwing, it was still a great addition to the set. 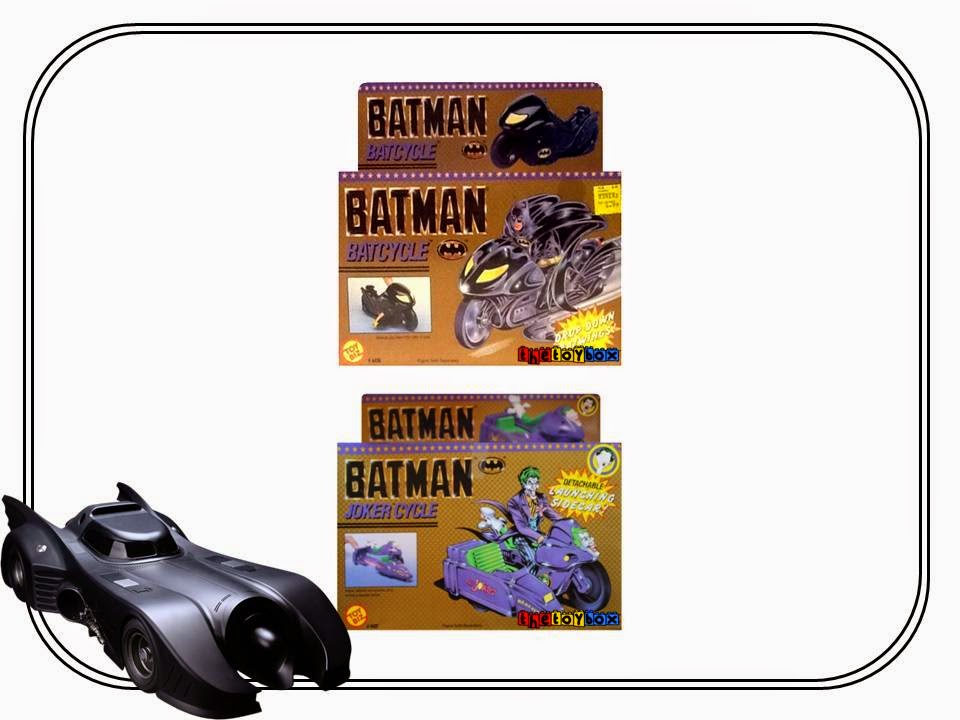 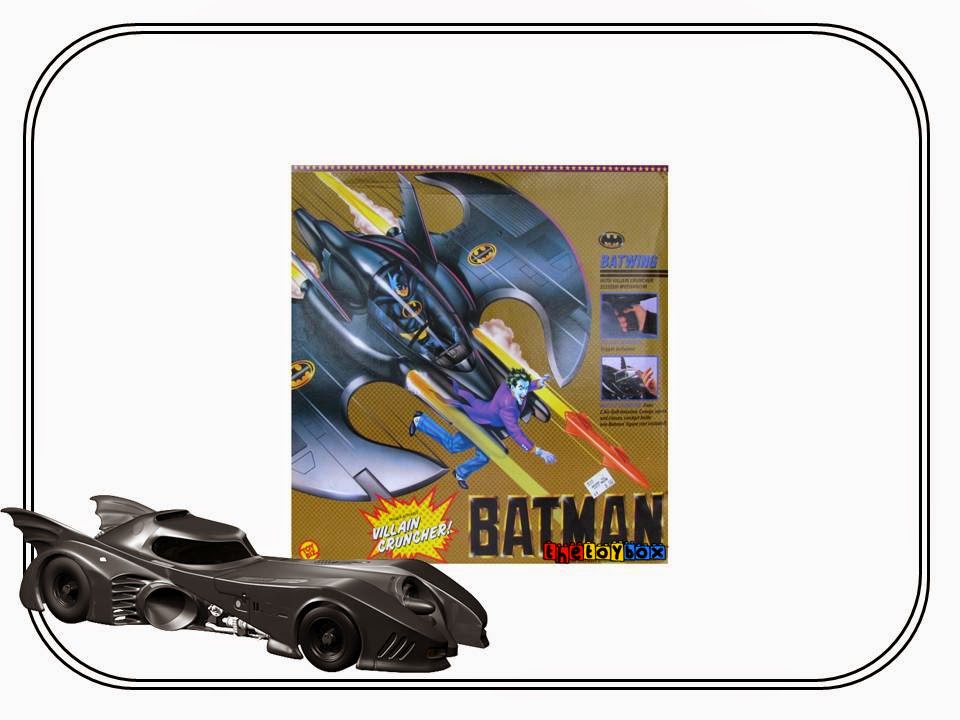 To up the stakes, Toy Biz produced a large Batcave playset. At $100.00 (or more depending on where you shopped), it was an item on many a child's Christmas list that Santa never brought. They toy offered many levels of interaction, and overall was just cool. 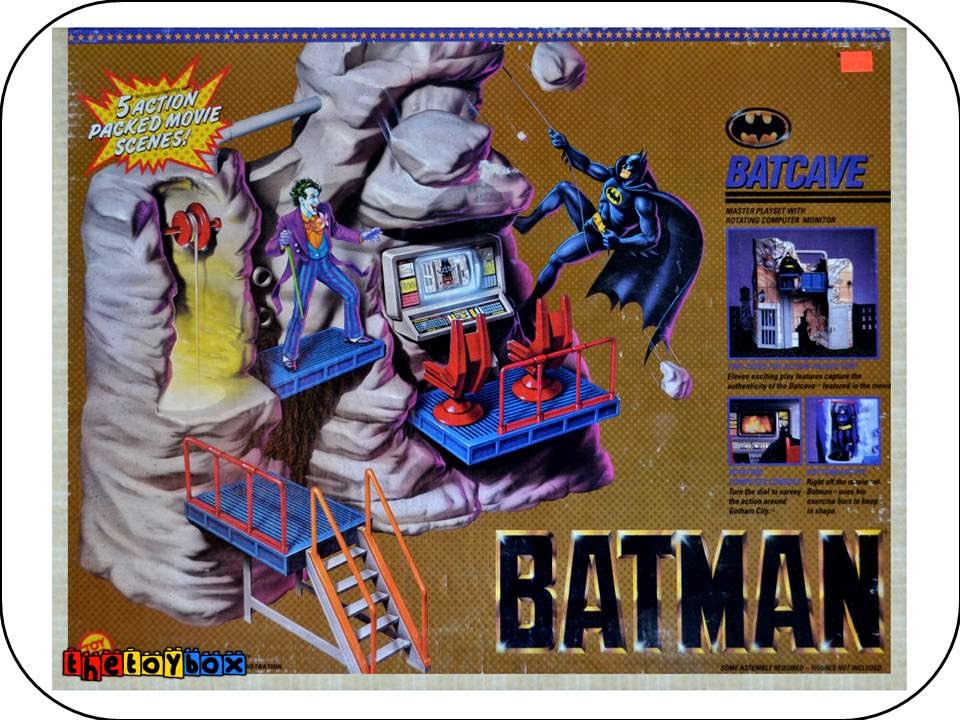 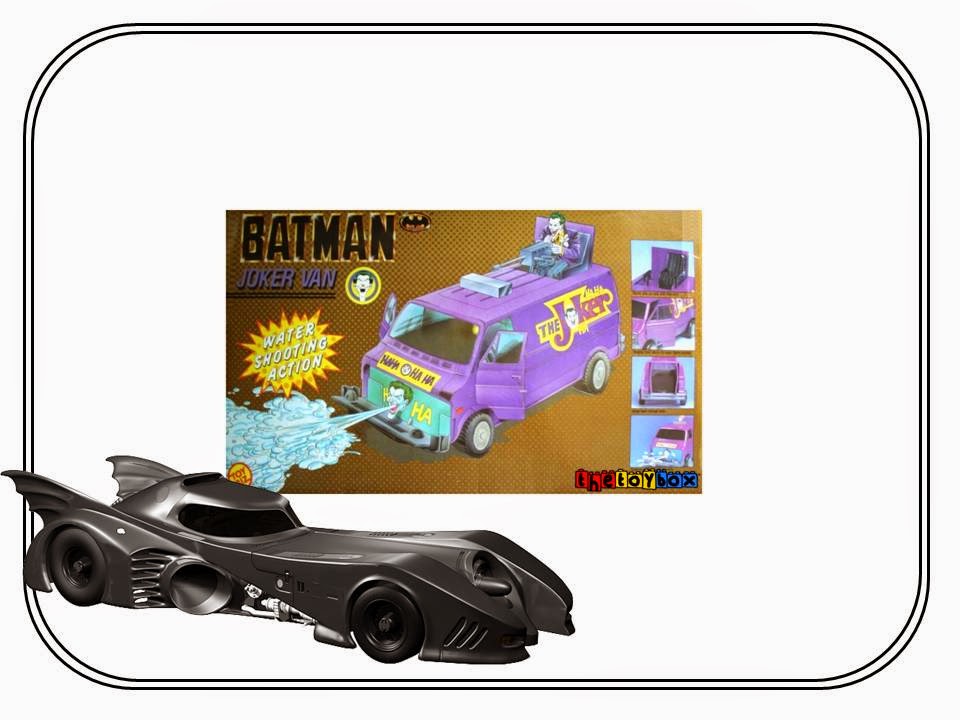 To not leave Joker fans out, Toy Biz produced a van and motorcycle for the Clown Prince of Crime. Despite not being in the film, the vehicles were still unique enough to hold their own on any shelf of the toy isle, and many Batman fans were eager to add them to their collections.

This was certainly a rare toy line indeed. It was one where the vehicles actually sold more units than the figures. While the series didn't last long, it remains a highly treasured part of many a collector's collection to this day with secondary market prices remaining fairly steady, yet low enough for your average fan to seek out.

Of course, before then, and since then, the Batman trademark has been secured by many a toy company, and several series have come and gone since Bob Kane first created the character for DC Comics in 1939. I'm certain this iconic figure will see many more toy lines in my life time.

Click "Here" for a continuation of this line in Toy Biz's DC Comic Super Heroes.

Click "HERE" to go back to the home page. For more posts related to this one, please click the labels below.
Posted by OK Records 1138 on November 07, 2011
Email ThisBlogThis!Share to TwitterShare to FacebookShare to Pinterest
Labels: 1980's, Batman, Batman The Movie, Jack Nicholson, Michael Keaton, Toy Biz