Mike Meyers dropped a comic gem on the world in 1997 when New Line Cinema released his comic opus Austin Powers: International Man of Mystery. The film quickly spawned two sequels in 1999 and 2002, with a fourth planned for 2013.

In 1999 McFarlane Toys released two series of figures (a total of 12 figures - 6 in each series). Staying true to McFarlane Toys standards of quality, the figures were amazing.

Each sculpt accurately depicted the characters, and included some fun accessories. Each figure also came with their own stand. 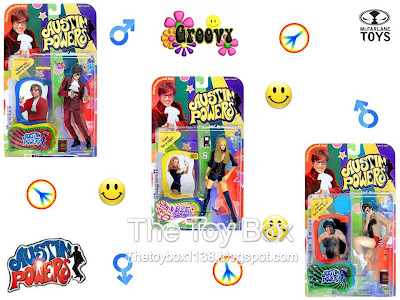 Because the toys were sold in retail stores across the world, Fat Bastard received a name change to Fat Man. 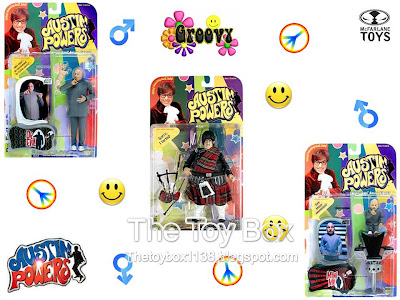 Also staying true to McFarlane Toys were the boat loads of variants that came about - Though the majority of them were merely changes to the sticker in the top left corner of the bubble pack. The figures from series one, and their variants included;

Series two was released within months of series one, and included another six figures. The packaging was changed slightly in color to show that they were new. 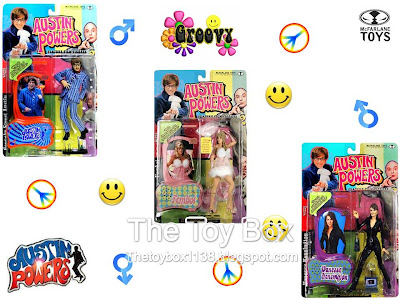 The seris included more variants based on blurbs in the top left corner of the bubble pack, but there was also one distinct figure variation. Scott Evil can be found with both a "blurred" shirt, and a Kurt Coban one. 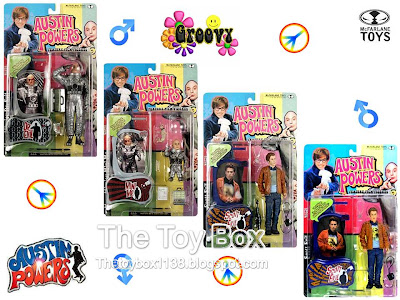 The figures and variants for the six series two figures are;

Series two also saw the release of a two pack/vehicle in the form of Dr. Evil and Mini Me with Mini Mobile. 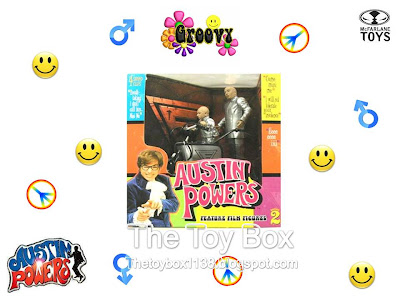 In 2000 ToyFare Magazine offered an exclusive two pack of Dr. Evil and Mini Me. Though they were just slightly altered repacks of the vehicle two pack above. 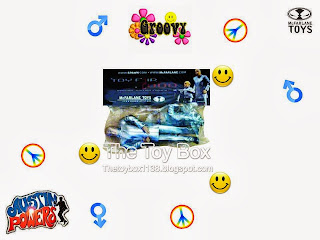 We're a big fan of the Austin Power films, and these figures are a wonderful compliment to them.

Each figure can be found for around eight to ten dollars, with the exception of the Scott Evil with Kurt Coban shirt which can fetch as much as $40.00.

Click "HERE" to go back to the home page. For more posts related to this one, please click the labels below.
Posted by OK Records 1138 on November 14, 2011
Email ThisBlogThis!Share to TwitterShare to FacebookShare to Pinterest
Labels: 1990's, Austin Powers, McFarlane Toys, Mezco