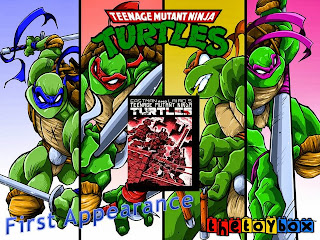 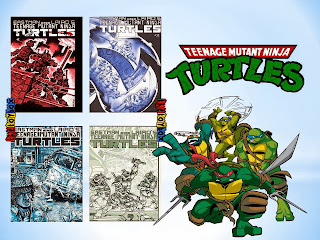 In the years since the Teenage Mutant Ninja Turtles were created, Michelangelo, Leonardo, Raphael and Donatello have become a classically comical part of Americana.

Kevin Eastman and Peter Laird, the creators of the Turtles, published their first black and white TMNT comic book with just $1,200 in 1984. With tons of work and a plethora of good fortunes, they've seen the Turtles go from an underground hit to a world-wide phenomenon. It's been a wild and crazy ride, to say the least!

After a long day of work way back in 1983, Kevin and Peter were relaxing at Laird's house watching television and sketching. "We got real punchy!" Peter explains, and they started drawing cartoons to amuse themselves. At the time Peter was doing editorial illustration and advertising art with some success while Kevin was working as a short-order cook and drawing comics in his spare time. As the evening evolved, Kevin eventually drew a bipedal turtle with Nunchukus strapped to its arms and called it a "Ninja Turtle". Peter, aware of a nifty idea when he saw one, asked "Why not a teenage mutant ninja turtle?" and thus the legend was born. 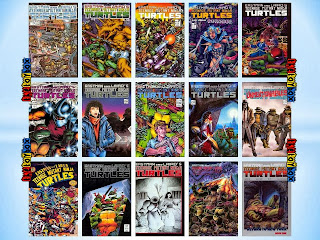 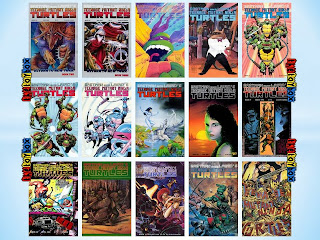 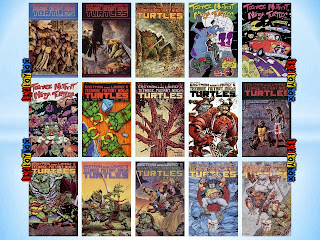 Eastman and Laird liked the Teenage Mutant Ninja Turtle idea too much to let it remain idle in their sketchbooks. The creative duo wrote an origin story that parodied Frank Miller's Daredevil and Ronin series, comics that Kevin and Peter held in high esteem. The lone Teenage Mutant Ninja Turtle became a group of four terrapins who had a ninjitsu sensei, a mutated rat named Splinter. Kevin and Peter experimented with drastically different costumes for each Turtle, but the artists finally settled on a singular outfit that the mutant quartet would share. Each Ninja Turtle was named after a renown Renaissance artist.

"We had all the Japanese fighting methods, but we didn't want to make up Japanese names because we thought they'd seem too strange to American readers." explains Kevin. "So we decided to go in the opposite direction and used distinctly European names. We both had studied art history, so we picked Raphael, Donatello, Leonardo and Michelangelo." 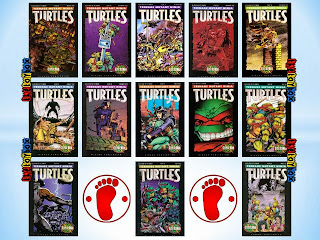 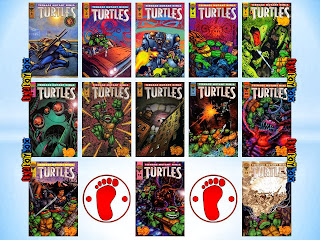 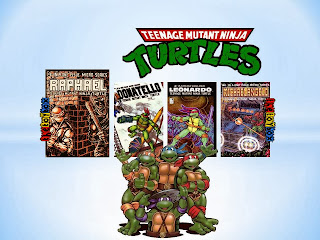 Back in those days, neither Kevin nor Peter owned a computer with a spell-checker, so Michelangelo was misspelled as "Michaelangelo". Fortunately, everyone seemed to get the point, regardless of the additional letter "a". Once Mirage was able relaunch the Turtles franchise in 2003, Peter decided to right the old wrong, and Mikey now spells his name correctly as Michelangelo. It's never too late to fix a mistake. :)

With the story written, Kevin and Peter began doing the artwork. Since the creative duo had similar styles, they were able to switch tasks back and forth. Some pages were penciled by Kevin and inked by Peter, some pages were penciled by Peter and inked by Kevin. Once the complete comic book was finished, they set out to find a publisher for it. Much to their dismay, the guys had no luck finding someone willing to print the title. 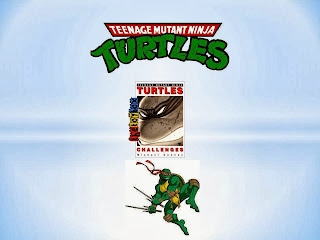 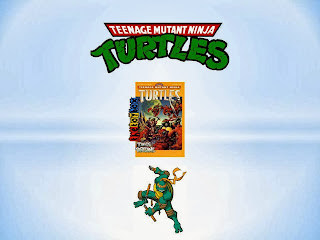 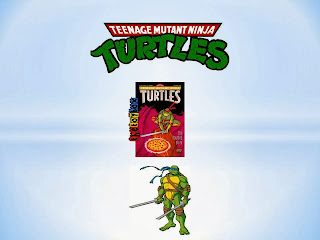 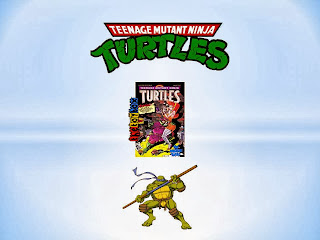 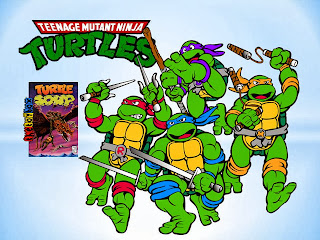 Kevin had just gotten a $500 income tax refund check, so the artists decided to self-publish the comic book. They borrowed an additional $700 from Kevin's uncle, Quentin Eastman, and used the money to print 3,000 black and white copies of the first issue of the TMNT. The artistic duo still had enough money left over from the costs of printing to take out a single one-page advertisement in a popular comic book newspaper entitled Comics Buyer's Guide.

"We expected to sell them all as single copies through CBG." Peter remembers. "Instead, we got calls from distributors and learned about the wonderful world of discounts." 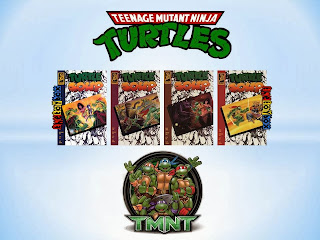 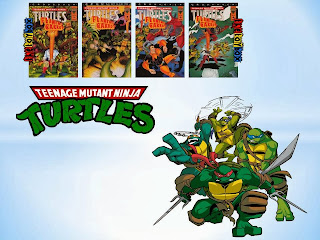 Distributors buy wholesale copies of a publisher's books, typically at a 60% discount, and then sell the comics directly to the retailers at discounts ranging between 40-58% off of cover price, depending on volume. With the new information in hand, the TMNT comic was made available to the comic book distributors, which in turn made it easier for the comic shops to order the book. Retail distribution also relieved Kevin and Peter from the arduous task of individually packing and shipping their comic!

The first issue of the TMNT went to the printer on April 1, 1984... no foolin'! The printer finished the job in time for Peter and Kevin to debut the title at a comic book convention in Portsmouth, New Hampshire on May 5. Oddly enough, the printer hadn't printed the Turtle comic in the usual comic book format. TMNT #1 was an over-sized book. 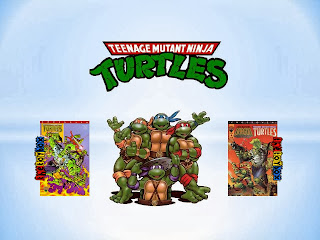 "We'd gone to a printer (who knew nothing about printing comics) with a locally produced TV schedule giveaway." Kevin commented. "We told him, 'This is what we want: a colored stock cover and black and white newspaper inside.' We never thought to specify size, so he printed the issue in the same dimensions as the TV schedule giveaway we used as a sample!" 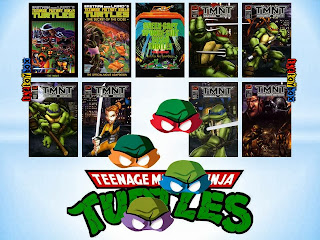 Kevin and Peter decided to name their new publishing company Mirage Studios; since there wasn't an actual studio (only kitchen tables and couches with lap boards), they thought that "Mirage" was a fitting moniker. Peter had experience working with newspapers, so the pair made up a four page press kit with a story outline and artwork that they sent to 180 TV and radio stations. On a whim, they sent the package to the Associated Press as well as United Press International. This initiative proved highly valuable, as several local newspapers ran long stories on Mirage Studios and their creation, the TMNT. PBS radio also did a five minute story on the mutant terrapins, and perhaps most significantly, a reporter from the UPI wrote a story about the Turtles that was picked up on the national wire and ran in countless newspapers across the USA. This massive exposure created a demand for the interestingly titled comic that caught everyone by surprise! All 3,000 issues sold out quickly, much to Kevin and Peter's delight! A second printing of the comic book went to the printers and sold out its print run of 15,000 copies, and was followed shortly by a third printing that sold out its run of 35,000 issues! The Teenage Mutant Ninja Turtles hit the starting gate at full speed! 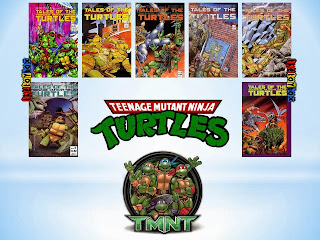 The success of the TMNT comic book led to other projects. Palladium Books produced a pen and paper role playing game featuring the Turtles, Dark Horse Miniatures produced several sets of TMNT lead figures for the RPG (and collectors alike) and First Comics produced full color reprint volumes of the original series. Kevin and Peter continued to produce Turtles comics as quickly as they could and their popularity grew.

"When we created the Turtles, we wanted to spoof the world of super hero characters and poke good natured fun at the heroic but not-so-funny characters that dominated the business." said Peter. "The Turtles are fun heroes with an attitude. Basically, they act and think like average teenagers." 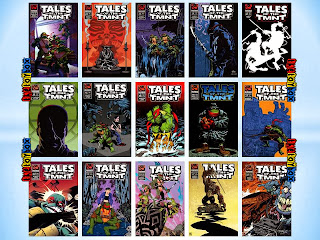 "They're always willing to lend a helping hand, but are constantly on the alert for the funny side of life." added Kevin.

It's a formula that has worked well!

As the popularity of the comic grew, attention outside of the comics industry flourished. As stated above, the first issue of the TMNT had an original printing of only 3,000 copies, but by the time Turtles' licensing agent Mark Freedman came aboard, the comic was selling over 125,000 copies (making it perhaps the most successful self-published B&W comic in the USA.) Mark caught wind of the Turtles thanks to Palladium's TMNT RPG book and was excited by the look and attitude of the characters. Believing that he could expand upon the Turtles' success, Mark contacted Peter and Kevin. 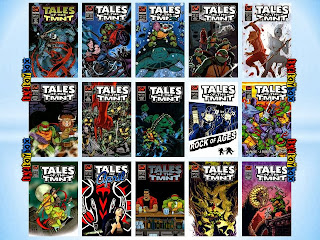 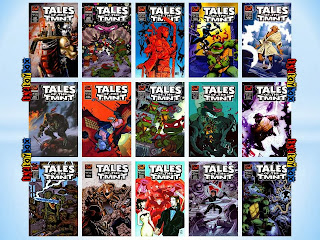 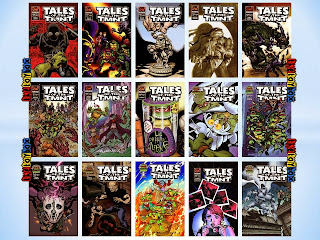 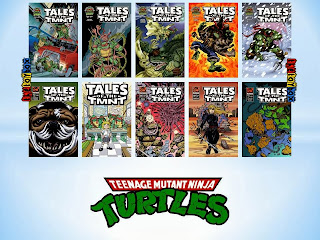 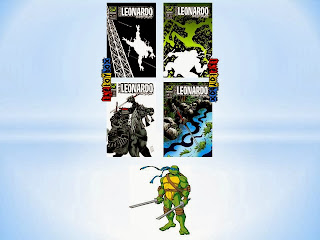 Through much trial and tribulation, Mark connected the TMNT with a small toy company interested in breaking into the boys action figure market and willing to take a chance on a concept that all the major toy companies thought was too risky (be wary of the opinion of "experts"). Playmates Toys agreed to produce the action figures if a television deal could be struck, and Mark pulled it all together upon meeting with animation producers Murakami, Wolf, Swenson, Inc. A five episode mini-series was produced for syndicated release, and within days of the show airing, it was apparent that the TMNT would prove to be every bit as popular to the television audience as it already was with comic readers. From there, Mark's company, Surge Licensing, formed an unstoppable marketing powerhouse that set a new standard of excellence in the licensing and merchandising industries! 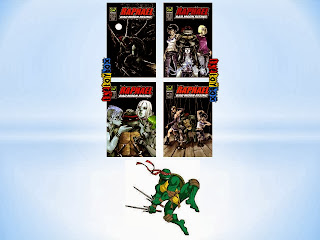 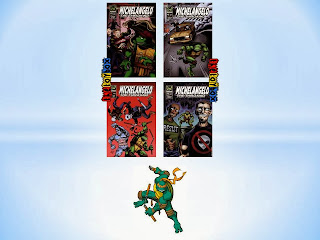 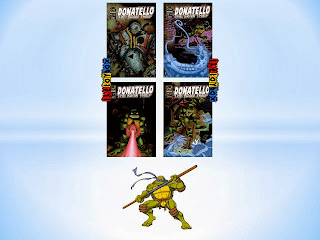 Click "HERE" to go back to the home page. For more posts related to this one, please click the labels below.
Posted by OK Records 1138 on May 10, 2010
Email ThisBlogThis!Share to TwitterShare to FacebookShare to Pinterest
Labels: 1980's, Comic Books, Mirage Comics, Teenage Mutant Ninja Turtles