Not all toys back in the 80's were winners. In fact if you were to ask me (and I'll concede that nobody has), Willow will go down in my book as the worst one ever produced. 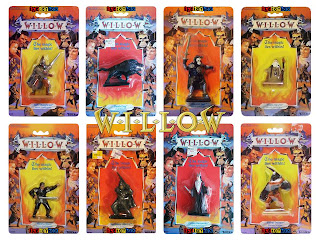 More like miniatures without a game to call a home, the Willow figures were tiny plastic molds depicting characters from the movie. I don't know what possessed Lucasfilm to give Tonka the rights to produce such an awful toy line, but regardless of the reasoning, they did.

The toys were non posable, unmovable, and came permanently attached to a resin stand making them not even what I would consider to be an action figure. Like I said above, more like miniatures to a roleplaying game that never saw the light of day.

The series saw a total of 14 basic figures, three of which were variations of Willow himself (the third being a Nestle mail away exclusive). The series also included five horseback figures which were essentially a horse with a remolded character from the film. Like the basic figures, the horseback characters were unyielding plastic, leaving not much room to actually play with them, but rather simply as display pieces. But what kid wants to do that with their toys? 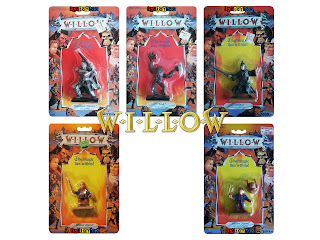 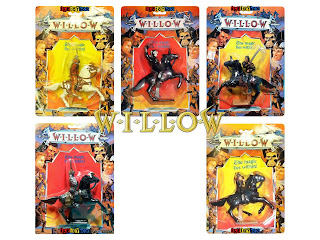 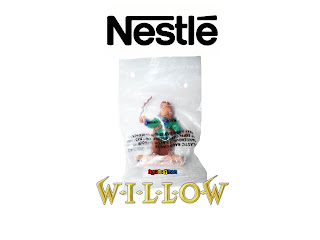 In addition to the single packed figures, Tonka released collector sets which each included two figures and one figure with a horse.  Two Hero packs, and one Evil pack have been found by collectors, while a second Evil pack has been noted on several other collectible sites, yet no photos seem to exist, and no physical set has been found on sites such as eBay for purchase. 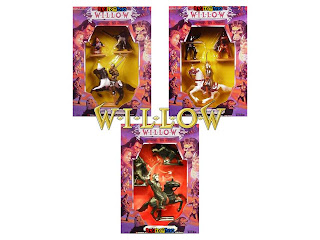 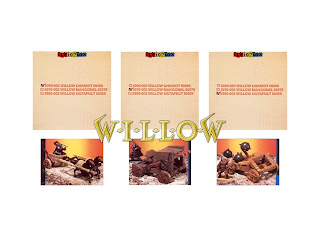 Unlike the awful figures, the vehicles (if you could even call them that) which were released with the series had a little more going for them. The three vehicles were originally intended to be Sears exclusives, but somehow got released to retail stores across the U.S., much to the dislike of a disgruntle group of Sears C.E.O.'s. Oddly enough, since the series tanked hard, Sears never made a big stink about it. Probably because of the amount of money they stood to loose had they sold them exclusively.

A large version of the Eborsisk creature from the film was also released with the series. If you were to ask Lucasfilm, their representatives would swear up and down that this toy never hit shelves. This however would be a huge contradiction to the folk who have documented across websites that they do indeed have one, and that they have had it since their parents bought it for them from their local store. So somewhere, someone goofed. 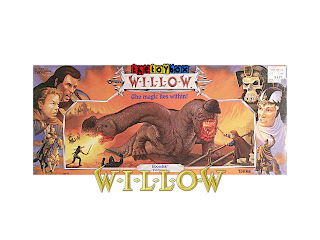 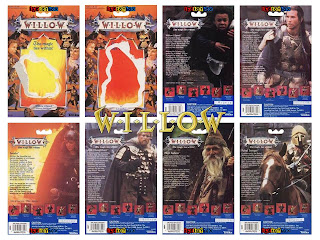 Probably the saddest thing about the Willow action figure line is that unlike the toys themselves, the cards were really cool. I'm talking one fine piece of eye candy. They had wonderful photos of the characters from the movie on the back, and each back also had an in depth blurb about the individual. The fronts of each card varied in color depending on whether or not the character was a good guy or bad guy. The tag line on the front of the package read, "The Magic Lies Within".

Within what? Certainly not inside the plastic with these terrible toys!

Sorry about that. I get a little sensitive sometimes. 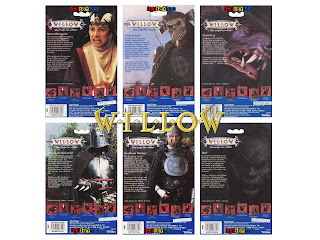 Though the series was short lived, Willow fans across the world still look for the missing pieces to their collection. It may have been one of the 80's worst toy lines, but it's still managed to make it's way into several collector's homes where it remains a cherished part of their collection. 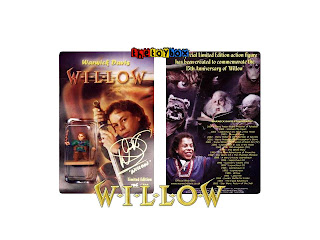 In 2004 Warwick Davis created a limited hand numbered and signed edition (literally - he paid for it out of his own pocket) of the Willow Figure. This figure was only available via Coolwaters Productions' website, and was limited to only 300 pieces.

Check back next time when we take a look at another good or bad toy line from the 80's.

Click "HERE" to go back to the home page. For more posts related to this one, please click the labels below.
Posted by OK Records 1138 on September 28, 2009
Email ThisBlogThis!Share to TwitterShare to FacebookShare to Pinterest
Labels: 1980's, Tonka, Willow