Thundercats was one of the biggest hit cartoons of the eighties. A cartoon which contained futuristic technology and alien worlds, merged with the fantasy of ancient evil and monsters. This show was close but quite different than He-Man and still remains a favorite amongst eighties nostalgic collectors.

Following up the 130 episodes was an incredible line of toys produced by LJN. The figures stood at an average of 5 inches tall and represented each character from the series better than any toy line for its time. LJN produced 3 main series of figures, with three sub series. All cast characters of both good and evil were produced. This would include the honorable Thundercats team to the vile Mutants and Mumm-Ra, and also included many characters that appeared in anywhere from one to all of the episodes.

LJN did not hold back on their extreme detail of sculpting, allowing each figure to look exactly like the character from the show. Almost every figure had a "Battle-Mattic" action feature which was basically a lever in the back which when pressed the figure would move their arm or other various body parts. Other figures had options of spinning or lighting up. 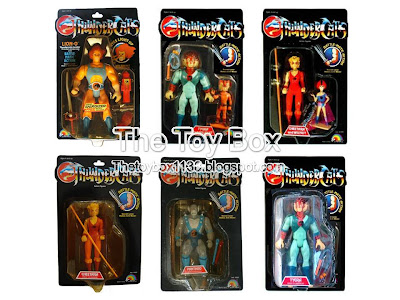 Probably the biggest mistake that LJN made when producing the Thundercats toy line was that they produced the entire main cast (both good and evil) in the first series. While fans were happy to gobble them up from retail stores, this left little to no reason to purchase anything past this series unless you were a die hard fan of the show and easily recognized all the obscure figures that would follow. 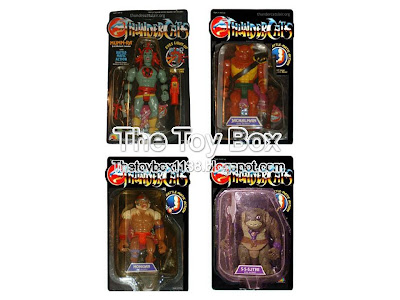 The first series of Thundercats included;

Each figure came with accessories and weapons that were dead on to the original show. This made it even easier for children to incorporate the toys into their imaginations based on what they were already very familiar with. Interesting was that Tygra was sculpted to resemble his younger version as seen briefly in the very first episode of the series. 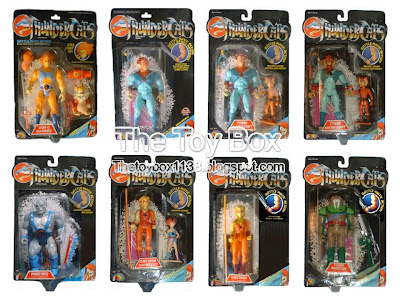 Hot on the heels of the first series was the inevitable second. An additional seven figures were produced which included a newly sculpted Tygra that more resembled the character portrayed in the cartoon. Several figures from the first series were repackaged for the series, and all the cards included a mail away offer sticker at the bottom right corner.

As we said above, the second series (and each additional series) was not as popular as the first. While it contained some known faces, one had to be quiet a fan of the series to recognize all of them. 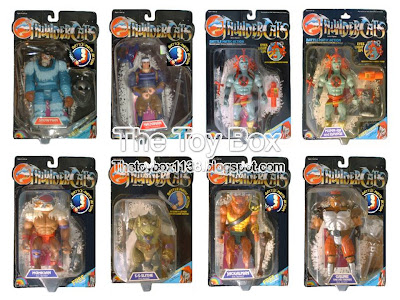 The new figures produced were;

Ratar-O was produced with both black and silver weapon variants. 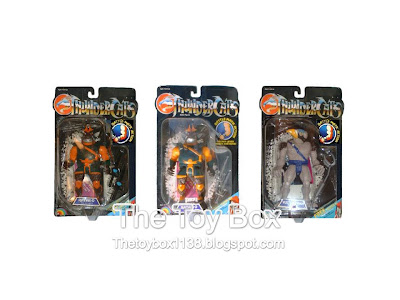 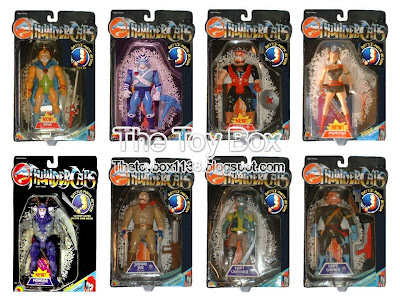 When the final season of the Thundercats cartoon aired, several new faces were introduced in hopes of reviving the series for further episodes. This included creating a whole new story arch which included a second group of Thundercats stranded on the same planet. These characters were eventually found by the original Thundercats and invited to join the already crowded Cat's Lair.

The third and final series of Thundercats included; 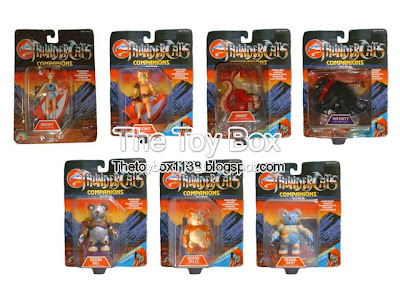 During the second series of figures, LJN produced a few sub sets. One of these subsets included "Companion Packs".

Companion Packs comprised of seven smaller figures from the series (four of which were previously available with the larger figures), but were newly sculpted to better represent the characters on the show. 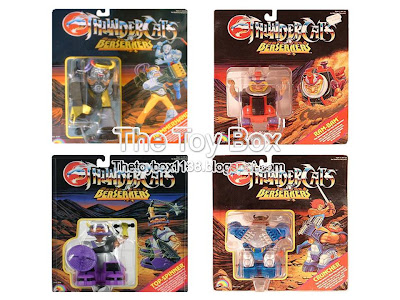 Another sub series which hit shelves were the four Berserkers. Each Berserker came individually packed in a much larger carded bubble than the original figures and boasted some pretty fancy upgrades which included spinning action and rev up and go.

The Berserkers were introduced late in the series in an attempt to shift the focus off of Mumm-Ra who was getting to be a very tired out villain. They were basically a group of sky pirates bent on pillaging and stealing, and mainly took out their aggression on the Berbils.

The four Berserks released were; 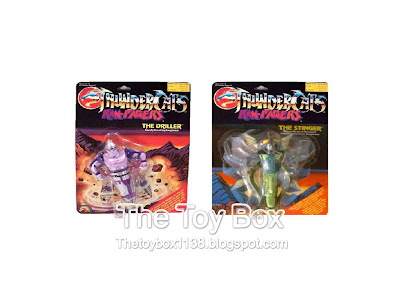 The third and final sub series released, which came out during the third series of toys were the Ram-Pagers which consisted of Driller, and The Stinger. A third Ram-Pager, Mad Bubbler was slated for release, but the series was cancelled prior to production. 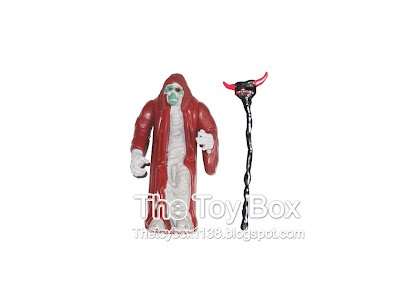 As with most toy lines, LJN offered an exclusive mail-away figure of Mumm-Ra as a mummy. This figure was available between the second and third series by mailing in a set amount of proof of purchases as well as a small shipping fee. The figure was mailed in a plastic bag inside of a plain brown box and came with a staff.

With the exception of his arms being able to go up and down, the figure was a solid piece of plastic. 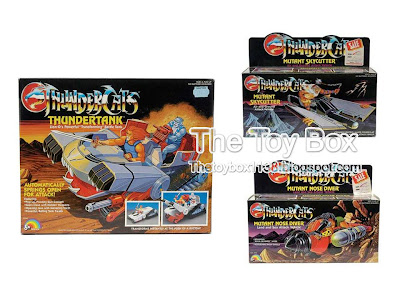 Most of the vehicles available in the Thundercats line were seen in the show, but there were a handful of them created by LJN specifically for the toy line. Obviously the more highly sought after ones by kids were the Thundertank and Cat's Lair as those were seen daily on the show. 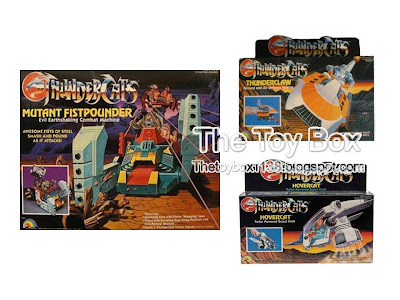 The vehicles included throughout the entire Thundercats line were;

Two playsets were produced for the series during the second series of toys; The Cat's Lair and Mumm-Ra's Tomb Fortress. 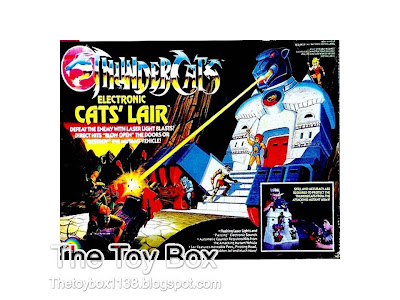 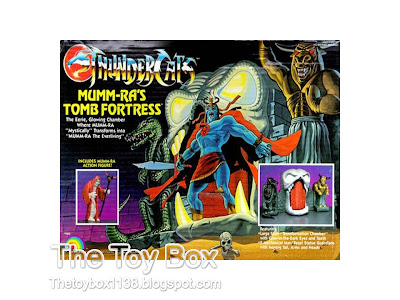 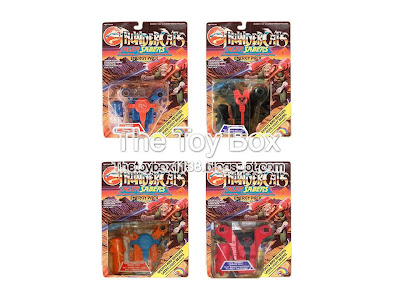 During the third series, LJN produced a small line of accessories, the Lasersabers. They were essentially four of the same backpack, but in various colors;

Red is the hardest to come by, and all are fairly difficult to find mint in their packages. 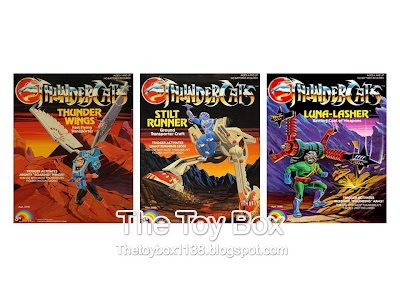 A final set of toys released in the third series was known as "the transporters". These included;

LJN had planned many more figures and pieces to be produced. These unproduced prototypes were so close to production, that they were even featured in catalog inserts with the toys.

We remember Thundercats fondly. Right along side He-Man, it was one of our favorite cartoons growing up.

Click "HERE" to go back to the home page. For more posts related to this one, please click the labels below.
Posted by OK Records 1138 on August 03, 2009
Email ThisBlogThis!Share to TwitterShare to FacebookShare to Pinterest
Labels: 1980's, LJN, ThunderC.A.T.S.