The Adventures of the Mighty Crusaders began in the pages of Archie Comics (the publisher, not the series) in 1965. Though it was intended to be an ongoing monthly title, popularity quickly waned - Or possibly never even grew. Whichever it was, the series ended after just the seventh issue in October of 1966.

The series was revitalized in the pages of The New Adventures of the Mighty Crusaders in 1983 under Archie's Red Circle Comics. After thirteen issues the series was once again cancelled (in 1985).

A third attempt to launch a comic series came in 1992 when the characters returned for The Crusaders. This time out, DC Comics licensed the rights, and produced the series under their Impact banner. Much like the prior attempts, the series was short lived, lasting for just eight issues.

In between the original and New Adventures comic series, Remco produced eight figures based on the Mighty Crusaders - In 1984 to be specific. What's interesting to note about some of the characters produced in plastic was that they didn't actually appear on the team (officially) until the 1992 comic series - I.E. 8 years after the figures were produced. 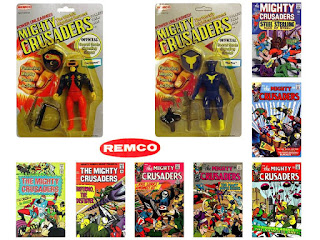 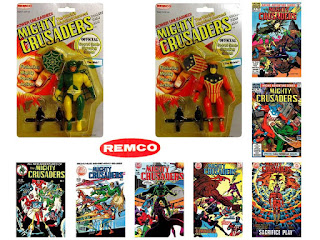 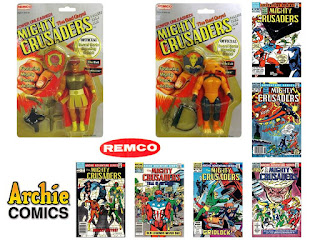 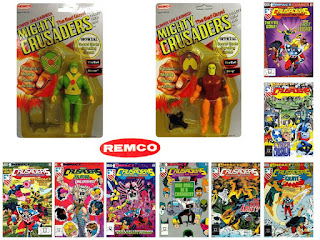 Unlike many Remco lines, Mighty Crusaders isn't all that pricey to obtain these days. Figures can sell for as little as $8.00 each, mint on card - A far cry from the $60.00+ that you'll spend on each of Remco's Karate Kid figures. They're also not to difficult to find, so putting a set together is fairly easy to do. If you're looking for a line to pick up for little cash, this is definitely a good one.

Click "HERE" to go back to the home page. For more posts related to this one, please click the labels below.
Posted by The Toy Box on September 19, 2016
Email ThisBlogThis!Share to TwitterShare to FacebookShare to Pinterest
Labels: 1960's, 1980's, 1990's, Mighty Crusaders, Remco