When I started thinking about Halloween type posts, one of the first things that popped into my head was McFarlane's Movie Maniacs - Todd McFarlane that is.

For those of you not familiar with the man, Todd McFarlane got his start at Marvel comics where he quickly became one of the most recognized artists, and eventually landed his own Spider-Man series. From there, he moved on to become one of the most successful writers/artists/creators of the widely popular (at the time) Image Comics.

While Image Comics is a dust filled ghost town of a memory these days, McFarlane, being the smart business man he is branched out creating the hugely successful McFarlane Toys.

Accepting only the best in terms of quality and detail in his now several toy lines, McFarlane may single handedly be responsible for the "step up" most toy companies have taken in the overall accuracy of their toys, specifically toys based on movies, television and sports.

Despite it's start up as strictly a toy company producing figures based on the comic Spawn, McFarlane Toys has gone on to produce several toy lines since the late 1990's, which include lines devoted to dragons, musicians, cartoon characters, among others.

Today I'd like to show you the seven series in the Movie Maniacs line. Mainly because they fall into my Halloween theme, but also because, they're just that damn cool. While any fan of horror movies will appreciate these figures, I think the shear attention to detail is enough to make even casual onlookers do a double take. 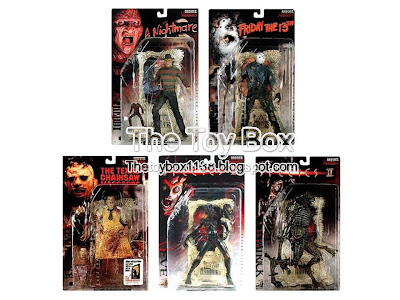 Series one hit the shelves of toy and hobby stores in September of 1998. The series launches with two of New Line Cinema's most famous horror villains, Freddy Krueger from A Nightmare on Elm Street and Jason from Friday the 13th, as well as Eve and Patrick from MGM's theatrical release Species II and Leatherface from Texas Chainsaw Massacre.

The figures were widely accepted by McFarlane and movie fans alike and literally overnight were sold out at most retailers causing secondary market prices to skyrocket. 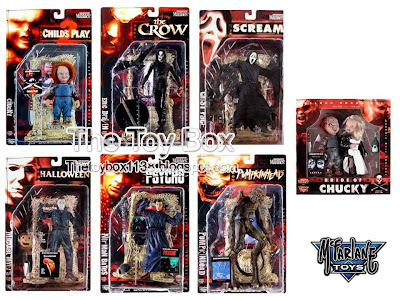 The following year brought us series two which would contain several move familiar faces from popular horror genre films, as well as a unique Crow figure which fit more in the line of action/fantasy. This concept was very popular, and later series went on to include further non horror film related figures.

Series two included; Chucky and his Bride from the Bride of Chucky/Child's Play films, The Crow from Miramax Films The Crow, Ghostface from the highly popular Scream series from Dimension, Michael Myers from Halloween, Norman Bates from Universal's Psycho series, and Pumpkinhead from the MGM film. 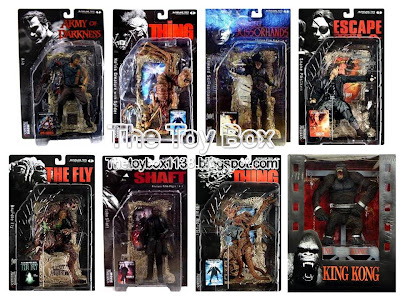 Moving further away from the horror genre, series three unveiled new figures based more upon popular action/fantasy based characters, but still managed to deliver a great assortment of horror icons. The most sough after figure from the third series would be Ash from the Evil Dead/Army of Darkness series, though it was by far the only one worth grabbing.

Series three included; Ash, The Thing: Blair Monster as based on the John Carpenter remake, and as seen at the end of the film, Tim Burton's Edward Scissorhands, The Fly as seen in the 1986 remake, Shaft, from the 2000 remake staring Samuel L. Jackson, King Kong from the Peter Jackson remake, The Thing: Norris Monster and Spider which bursts from the chest of a dead man in the John Carpenter remake, and Snake Pliskin from the popular Escape from New York/LA films. 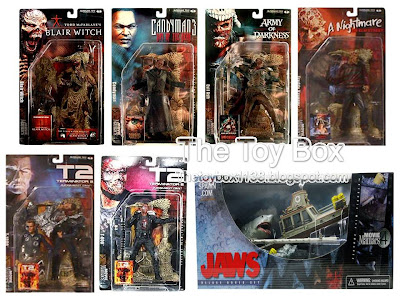 Now in its fourth incarnation, the Movie Maniacs line has taken on a dark life of its own. What began as a series of horror toys has evolved into an action figure line that encompasses a broader range of film characters, from psycho nasties to cyborgs.

The series included; The Blair Witch as depicted in a concept sketch by Todd McFarlane, Artisan Picture's Candyman, Evil Ash from the Army of Darkness film, a newly sculpted Freddy Krueger from the Nightmare on Elm Street series, a deluxe edition Jaws from the original Universal Studio's film as well as the T-1000 and T-800 from James Cameron's Terminator series. 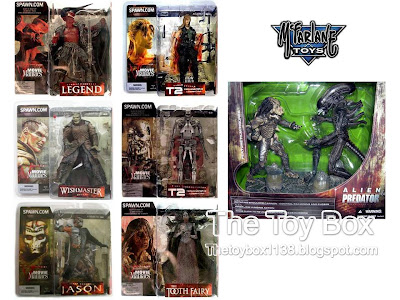 Now in its fifth year and going stronger than ever before, the Movie Maniacs series moves another step closer in its evolution from strictly horror figures to an action figure line that encompasses a broader range of film characters. Movie Maniacs Series 5 is McFarlane Toys' was one of the broadest and compelling yet, with figures from the classics of action and horror movies as well as newer properties. 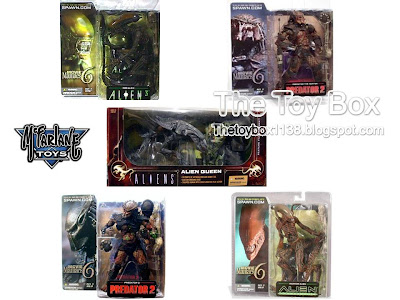 In 2003, Movie Maniacs concentrated strictly on two movie franchise; Aliens, and Predator. While I personally think this was overkill, especially considering that if you've seen one Alien or Predator figure, then you've seen them all. I mean, let's be honest here, there's not a lot of difference between any of the figures.

Regardless, series six included; Dog Alien, Predator the Hunter, Predator, Alien Queen and Alien Warrior. I'm sure you're all smart enough to figure out which one goes to which film. 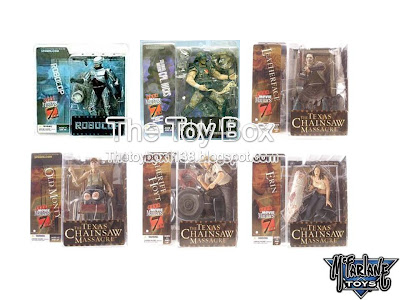 While the Movie Maniacs line did considerably well in stores, oddly enough, it suddenly came to an end. 2004 would be the last year that a Movie Maniacs figure would be released, and as of today, no word has been given as to whether or not any future figures are in development.

McFarlane Toys seems to have ceased the line as no new Movie Maniacs have been released since series 7. If there's one thing to say about the series, it's that you have to admit that the ones we've seen to date are rather impressive. The attention to detail, and the poses each of figure are sculpted in quickly pull you in, returning to you all those great memories of these now classic films.

Here's to you, Movie Maniacs!

Click "HERE" to go back to the home page. For more posts related to this one, please click the labels below.
Posted by OK Records 1138 on March 01, 2010
Email ThisBlogThis!Share to TwitterShare to FacebookShare to Pinterest
Labels: 1990's, McFarlane Toys, Movie Maniacs