While growing up, I only knew one kid who had Karate Kid toys - Me. I have to say, that all those kids who passed up this toy line for others really missed out. I loved these toys. They had tons of buttons to push for punching and kicking action, and they each came with an interactive accessory, I.E. a breakable wall, or boards.

Being a huge fan of the movies as a kid (and to an extent, still today), I ate these toys up. They weren't easy to find, but when I did, "Mom, mom, mom!" I would shout as I came running down various toy isles looking for her in the store. You know how it goes. 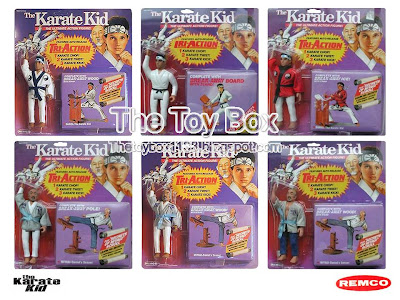 There were only two series released in The Karate Kid line. Each series had six figures (not including variants), and oddly enough, were the same in both. While the figures had different clothes, accessories and action moves, they were essentially the same.

What made the series unique was its Auto-Release Tri-Action - Meaning that each figure could throw some form of punch, kick and could also twist at the waist. All of this was achieved with a push of the button on the back, or simply twisting the body left and right. 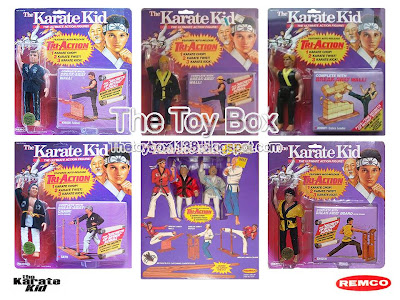 A six piece action set was also produced which came with Daniel and Myagi with several mini playset accessories, and a pair of chopsticks for catching flies (as seen in the film). 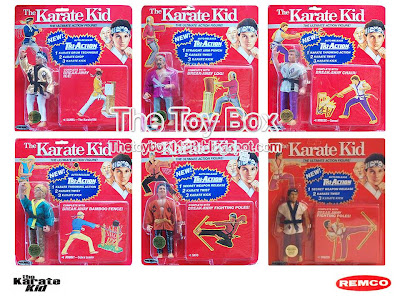 The second set came packaged on red bubble cards, but kept the same basic design as the first series. Series two include the same figures as series one, but with different Kimono's. Each figure was once again packaged with mini playset accessories. 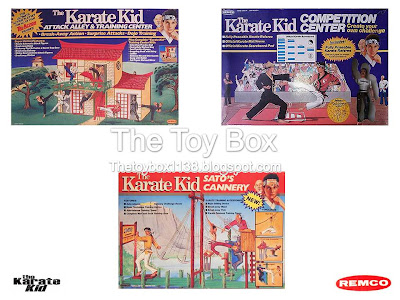 During the line, three playsets were produced, one which included the ref figure from the first movie. With the exception of the Competition Center, the playsets offered almost endless interactive possibilities. From pieces that could be "broken" off with a kick or punch from your figure, to moving bits and pieces, the toys had everything a kid was looking for.

Interesting about the playsets is that some websites make reference to a Corner Challenge Playset, as a forth playset for the line, though no known piece has been confirmed to exist, and no photos appear to exist of the item. 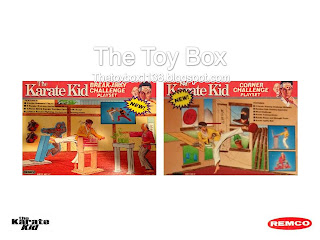 The Karate Kid toy line was short lived, and I totally think that kids who didn't have these toys really missed out. Even typing about them now I'm getting excited. My impulsive self is telling me, "You should get those off of EBay," - Which, would be hotness if I had a bucket full of cash I wasn't using. But, since I don't, I'll have to settle for the memories I have from my childhood. So, whether you missed the line or not, I hope you enjoyed this look back at yet another great toy line!

Click "HERE" to go back to the home page. For more posts related to this one, please click the labels below.
Posted by OK Records 1138 on February 01, 2010
Email ThisBlogThis!Share to TwitterShare to FacebookShare to Pinterest
Labels: 1980's, Karate Kid, Remco