I vividly remember that we were in Bangladesh at the time. We three siblings would crowd around the small black and white TV in my sisters room and watch whatever shows her antenna could pick up. Buck Rogers, The Incredible Hulk, Knight Rider, The A-Team and all those other long forgotten shows of the very early 80's. 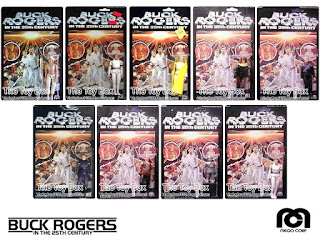 Despite being very, very young when these figures came out, I still somehow remember it all. It was Christmas. Granted I can't tell you which Christmas. But, it was Christmas. My brother, my sister and I were ripping packages open left and right as kids often do around this time of year. When all the paper had been gathered up by our mother, and all the pine needles from the tree had settled from being rustled back and forth by three kids underneath, we each found ourselves with a complete set of Buck Rogers in the 25th Century toys.

Though more popularly known for their 12" line of "dolls", Mego wanted to make the leap into 3 3/4" figures. Small action figures were the Hallmark of any toy line, and Mego not only met the challenge, they outdid themselves. The detail on the outfits is superb, and the design of Twiki all the way down to the tiny chest plate of Doctor Theopolis is incredibly accurate to the show. The packages themselves were quiet a bit of eye candy themselves.

One of the interesting things about the Buck Rogers line is that Mego was always strict about their anit-weapons policy in toys. Even though the figures had gun holsters, the guns were permanently molded to the figures legs rendering them simply part of the design.

There were only nine figures released in the series before the show went off the air and the line was cancelled. They included; Ardella, Buck Rogers, Draco, Draconian Guard, Dr. Huer, Killer Kane, Tiger Man, Twiki, and Wilma Deering. 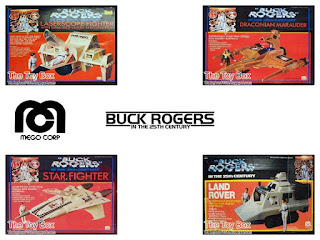 A small selection of vehicles, as well as one playset, was made available. The most holy grail piece to the Mego line was the  Star Searcher (below). Mint in the box, it can easily go for $800.00+. The toy is actually a repackaged Micronauts Star Defender. 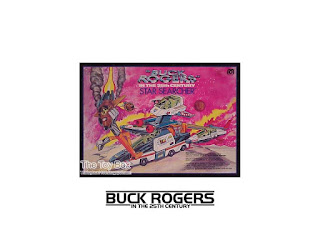 The large Star Fighter Command Center isn't far behind the price of the Star Searcher. Mint in the box, this playset has sold for as much as $500.00 to $700.00. It's one awesome playset! 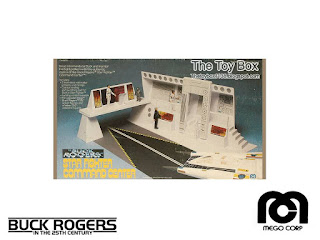 Today, the Buck Rogers toy line remains a strong collectible item on the secondary market. Fans of the series search high and low to complete a fully carded set of figures as well as a fully boxed set of vehicles. The show may be long gone, but the toys live on.

Click "HERE" to go back to the home page. For more posts related to this one, please click the labels below.
Posted by OK Records 1138 on January 04, 2010
Email ThisBlogThis!Share to TwitterShare to FacebookShare to Pinterest
Labels: 1970's, Buck Rogers, Buck Rogers in the 25th Century, Mego