The storyline of Sky Commanders comprises the daily adventures of a multi-racial group of soldiers and mountaineering specialists from all over the world who battle the evil General Plague and his goon squad of villainous mercenaries and miscreants, The Raiders, whose aim is to seize control of the planet. The series is set on a new continent deep in the South Pacific which was created by the emergence to the surface world of a new and powerful, unstable radioactive element called Phata 7.

This lethal energy source can only be stabilized for containment by exposure to temperatures of 200 degrees below zero. It is known that whoever can control the element and harness it enormous power would be the ruler of the world; a goal that the amoral General Plague wants strongly. It is up to General Mike Summit and his highly trained soldiers to stop him.

Complicating the Sky Commanders objective of stopping the criminal ambitions of The Raiders is the fact that the new continent (collectively referred to in the series as "The High Frontier") is routinely beset by sporadic, unstable and highly dangerous weather conditions and environmental hazards such as landslides, earthquakes, cave-ins, whirlpools, etc. There is also the need for monthly shipments of fresh supplies, new advanced technology and weapon systems. Constant attack by the scheming and underhanded Raiders and the aforementioned environmental dangers make the Sky Commanders mission only that much more dangerous.

Travel throughout the new continent is only possible by means of high-altitude flight, or by means of using Laser Cables; a specialized version of a rappelling cord emitted from combat backpacks worn by both Raider and Sky Commander. When used, the cables shoot out from the combat backpacks in the form of energy beams. When contact is made with a solid object, the Laser Cable solidifies into a solid metal cable line upon which travel is possible.

Phata 7, the radioactive element that both sides vie for control of, which came from the deepest subterranean recesses of the earth itself has brought with it on its rise to the surface of the world not only the new continent itself but also a wild and voracious, bizarre menagerie of utterly horrific creatures to inhabit it. These life forms are either the products of long-term mutative exposure to Phata 7's radiation or were just naturally brought about the way that they are. Occasional violent encounters with these monstrosities were yet another danger waiting for both sides of this battle for the future freedom or enslavement of the world. 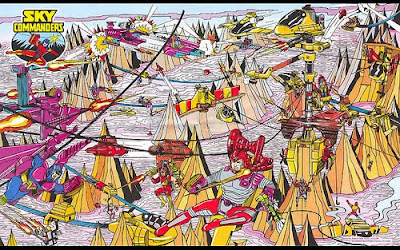 The toy line itself wasn't very large as the series fizzled away just as quickly as it began. Comprising of mostly vehicles, the series took the route that shows like M.A.S.K. and Air Raiders took - As in the vehicles were the selling point of the toys, not the figures.

Most of the vehicles comprised of sting based lines which could be attached to various objects around your house to simulate mountainous terrains. The strings generally weren't strong enough to hold up the toys for long periods of time, and the slightest jostle would send it crashing to the floor.

Despite this major flaw, the toys were still way cooler than the actual show, and offered hours of imaginative fun to kids as they attached things all over the house. The real pain was when all the strings got tangled together when you put them away.

The show may have tanked, but the toys will always have a special place in the hearts of kids who remember using their parent’s house as a virtual planet for all these great toys to hang from. 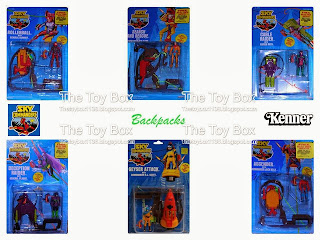 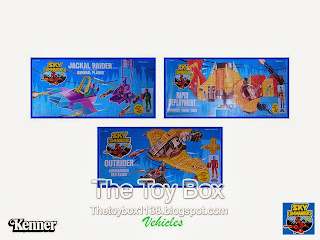 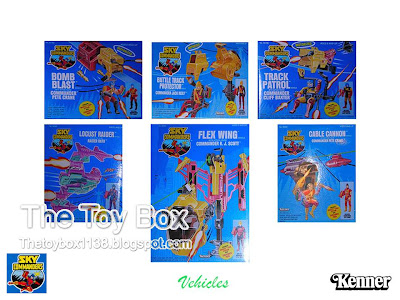 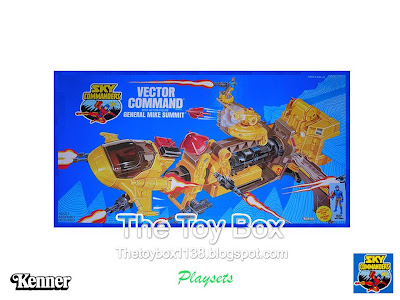 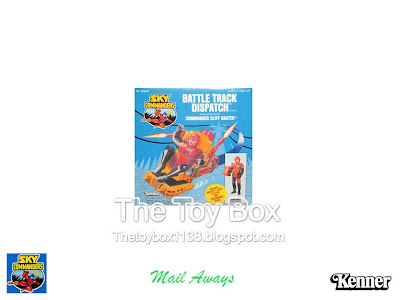 
Finding a complete set of sealed Sky Commanders is challenging, but rewarding if you can accomplish it.

Click "HERE" to go back to the home page. For more posts related to this one, please click the labels below.
Posted by OK Records 1138 on December 07, 2009
Email ThisBlogThis!Share to TwitterShare to FacebookShare to Pinterest
Labels: 1980's, Kenner, Sky Commanders