It's very hard to make an "action figure" line marketed towards girls - The reason being that most girls don't play with them. They're more into dolls and accessorizing, and things of that nature. Despite the odds, Kenner made repeated attempts at these types of toys geared towards young girls. For the most part they were successful, but usually only for short periods of times. 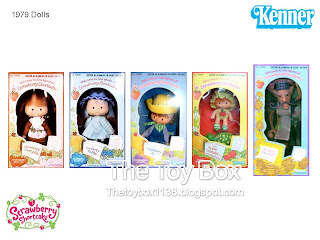 Like My Little Pony, the Strawberry Shortcake series had a small start in 1979, but didn’t take off until the early first half of the year 1980. Back then, the series didn't really have all that much going for it. There was no cartoon series based on it, and therefore kids didn't know what the concept of this new toy line was. In fact, the character was first utilized for greeting cards. Pretty much the only thing the series had going for it was its food related character names that managed to give off a scent that was supposed to resemble the food entitled in the characters name. However, this usually wasn't the case.

The initial series was rather small, including only five figures and no accessories. The characters released were; Strawberry Shortcake, Blueberry Muffin, Apple Dumpling, Huckleberry Pie, and the villain of the series; The Purple Pie Man. 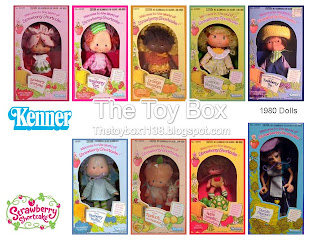 (thank you to our unknown commenter for this information)

Young girls across the U.S. tuned in to see what the deal was with this scented toy line. Fortunately for Kenner, the series found a following and was able to take off.

The second series of toys produced spanned from 1980 (prior to the show's release) - 1983 with a release of over 20 characters. This series would also be the beginning for several playsets and accessories that would be released throughout the entire series. 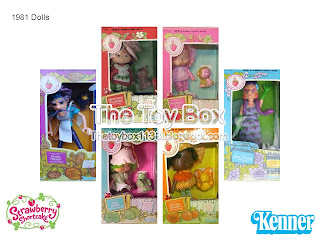 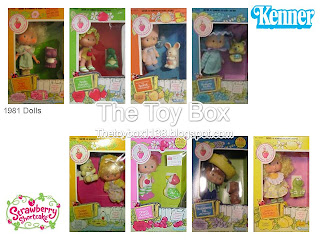 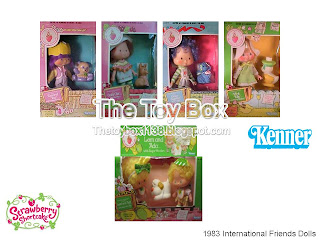 Not officially part of the second series, but still released in this same time frame were the creature/pet, Fig Boot and a Dancing Strawberry Shortcake. 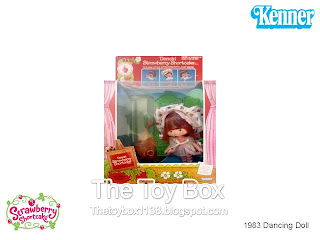 FigBoot was a dinosaur that was Baby Needs A Name pet. He was produced in 1984 and is VERY hard to find.

Dancing Strawberry was produce in 1983 and had a lot of accessories that came with her! A mirror with bar, tiara, stand, and dancing cloths. Her body was jointed and she could be moved in many different positions! 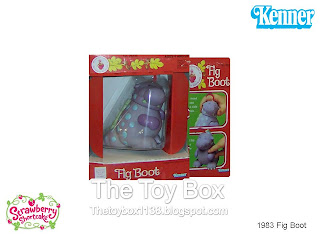 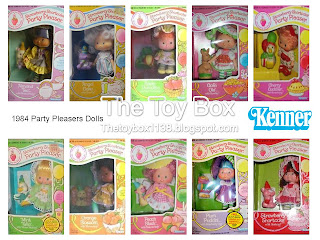 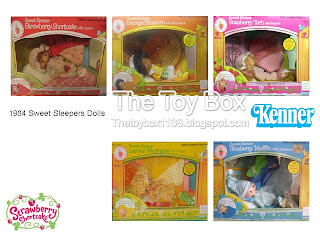 A separate line of dolls were issued in 1984. Known as the Sweet Sleepers, these dolls were dressed in sleepwear and came with a sleeping bag and a sleepy pet. There were five of these dolls in total. Unlike any other dolls in the Strawberry Shortcake line, there boxes could also converted into play bedroom sets. 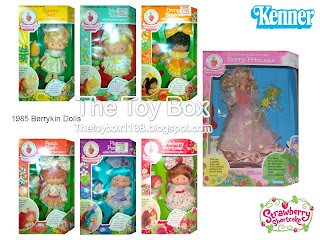 Technically the last series of the "action figure" style characters, in 1985 Kenner made the seven Berrykin dolls. These dolls were dressed in fancy party outfits and they had no pets this time, instead they had a little critter called a Berrykin. The Berrykins carried perfume pouches. A new doll was also issued in this line of dolls. This doll was Banana Twirl. All of these dolls are very sought after by serious collectors, especially Banana Twirl who is considered to be the rarest Strawberry Shortcake doll of them all.

One of our readers wrote in looking for help in identifying the doll in the photo below. 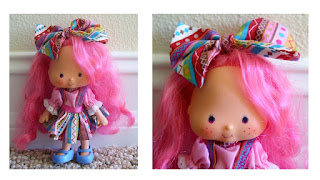 This doll appears to be a vintage Strawberry Shortcake doll, and is marked "American Greeting Corp. 1979" on the back of her neck. In addition, she is also stamped, "Made in Hong Kong" on her upper back. A notable feature is her flat hands.

Shortly after the Berrykin doll line was released, Kenner stopped production of the "action figure" line and turned more towards producing doll style characters from the series and a new line of miniatures. 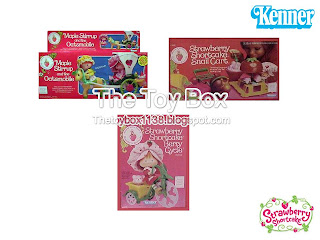 But what does one do with all the above Strawberry Shortcake figures that they have? Well, play with them in their playsets of course.

Throughout the entire series, Kenner released about a dozen separate playsets as well as a carrying case. However, in order to put all your figures in said carrying cases, you'd need to purchase quiet a few of them, as each case only held four figures and one pet. 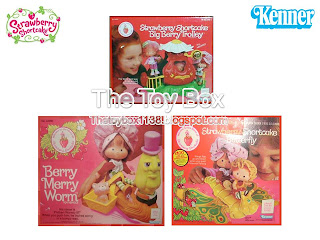 While this was the entire line of the "action figure" style characters, Strawberry Shortcake pushed on through the 80's until the series finally disappeared into the nostalgic hole that these types of things fall in. In the late 1990's, an attempt was made to breath new life into the series, but failed miserably. The remnants of that failed attempt were quickly swept under the rug in a plethora of bargain bins, and reduced for quick sale items. 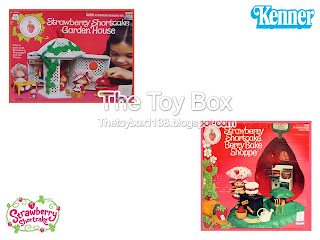 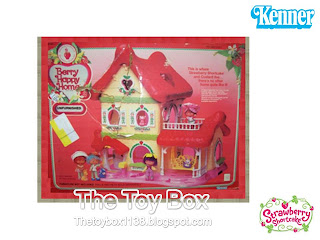 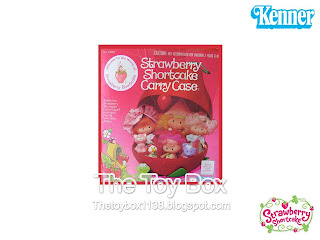 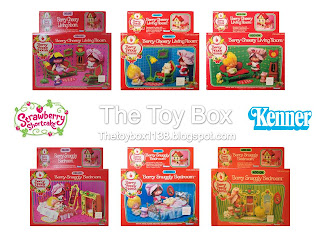 Kenner made a very sly move when it came to the Berry Happy Home playset. The sold it just as a shell. All the furniture inside was sold separately, room by room. To make it even more annoying, they released three sets of each room. A deluxe, a basic, and an add on.

The deluxe set included every piece for the room, while the basic set included "the essentials", and the add on included the bare minimum (or, the rest of what was not included in the basic set). Obviously if you could get it, the deluxe was the smart way to go. 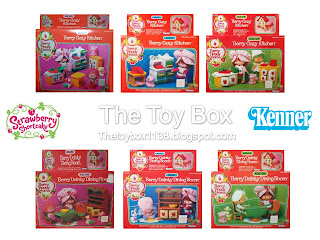 Now collector's of Strawberry Shortcake will tell you that the Berry Fancy Fun Room and Berry Bubbly Bath are the hardest sets to come by. We're going to set the record straight once and for all. THEY'RE ALL HARD TO COME BY! Just for archiving purposes, we were pulling our hair out trying to locate all these pieces.

We couldn't find a basic and add on set for the Fancy Fun Room, nor could we find a deluxe or basic set for the Berry Bubbly Bath and Berry Merry Attic. At this point with how much we've combed the Earth looking for them, we can't honestly say that they even exist. There is no reference to them on any other website, and no packaged versions to be found anywhere. If you have information or photos pertaining to these particular items, please contact us at thetoybox1138@gmail.com. 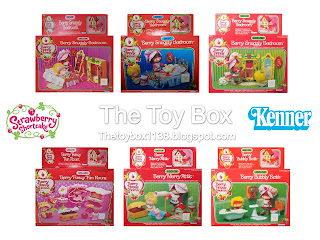 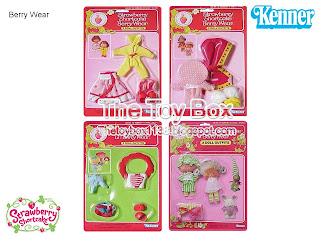 Finally, the last pieces released for the Strawberry Shortcake series were double pack clothing sets. Each set was themed differently, and allowed you to get varying outfits for your dolls. There were two different sizes, and depending on the set, you would either get clothing for the five inch dolls, or the four inch dolls.

While collectors have come to reference each outfit by name, there doesn't appear to be any official verbiage on the packages which corresponds with them. 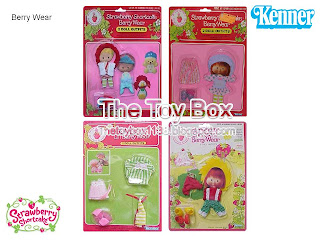 Strawberry Shortcake fought an uphill battle from day one when Kenner decided to produce essentially an action figure line for girls. But, despite this fight, the toys have become an iconic memory to little girls all grown up now, and the series thrives on the secondary market.

Click "HERE" to go back to the home page. For more posts related to this one, please click the labels below.
Posted by OK Records 1138 on April 27, 2009
Email ThisBlogThis!Share to TwitterShare to FacebookShare to Pinterest
Labels: 1980's, Kenner, Strawberry Shortcake