Ruthless People. That's the movie where Bette Middler starts out fat, and gets skinny by the end of it. Commendable, but not a very strong plot point aspect. Granted, the other half of said story is that she's been kidnapped. 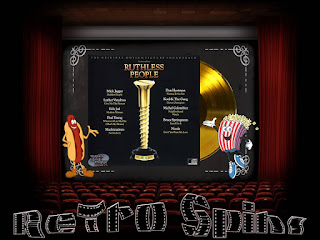 In this fiendishly funny comedy from the creators of Airplane!, loathesome millionaire Sam Stone (Danny DeVito) is RUTHLESS. How ruthless? When his shrill wife Barbara (Bette Midler) is nabbed by inept kidnappers (Judge Reinhold, Helen Slater), Sam cries tears of joy...and refuses to pay the ransom. And when the abductors threaten to kill the abrasive heiress, Sam takes immediate action - he celebrates! Ruthless People. Raucous...outlandish...one of the top box office hits of the year! - Back of the original VHS

The draw to this soundtrack, for me, was the inclusion of Mick Jagger's Ruthless People (song). Mind you, I'm no big Mick Jagger fan. Not by any means. However, as a fan of 80's music, this track popped into my head one day, and the as a result, the album got added to my want list.

With contributors such as Billy Joel, Paul Young, Kool And The Gang, Bruce Springsteen, and of course, Mick Jagger, there are tracks worth checking this album out for. However, it's not limited to the big name artists for good tracks.

My personal favorites include the title track, Ruthless People from Mick Jagger, Modern Woman by Billy Joel, Where I Lay My Hat (That's My Home) by Paul Young and No Say In It by Machinations. I will give an honorable mention to Dan Hartman's Waiting To See You and Nicole McCloud's Don't You Want My Love. These weren't bad songs, but I don't know just yet if I liked them enough to add them to my shuffles.

The thing I enjoyed the most about this soundtrack is actually the memories it brought back of the film. I've only seen it once, but as the soundtrack played, I found myself remembering quite a bit of it.

Click "HERE" to go back to the home page. For more posts related to this one, please click the labels below.
Posted by The Toy Box on September 15, 2020
Email ThisBlogThis!Share to TwitterShare to FacebookShare to Pinterest
Labels: 1986, 80's Album Review, 80's Music, 80's Music Review, Music of the 80's, Retro Spins, Ruthless People
Newer Post Older Post Home