My prior post on Metallica's Kill 'Em All where Queen got an honorable mention seemed like the perfect springboard to do my first Retro Spin on the band.

While I knew of Queen songs back in the day, I didn't know who the band was. My first introduction was on Springbook Volume 46 which featured Crazy Little Thing Called Love, but not from Queen. Rather, these albums, which were only produced and released in South Africa, featured cover bands (of sorts) singing the tracks. The lyrics were also changed slightly (for whatever reason that I still don't know).

Fast forward to 1991. Lead singer Freddie Mercury tragically passes away from AIDS and MTV hosts the day long Freddie Mercury Tribute concert. I tuned in for the likes of Metallica, Guns and Roses, Def Leppard and a huge surprise. I knew a lot of these songs people were singing. Queen songs.

It was because of this I began picking up cassettes of the newly remastered Hollywood Records Queen albums which were released in troves in 1991. The label literally released every single album the band had in their catalog, including several live albums. Queen would also become the first CD I ever owned when I traded the cassette versions to my brother for the CD's he had. It was from there that I completed my collection with 1982's Hot Space becoming the last album I needed - Prior to 1995's Made in Heaven (and any subsequent "new" releases). 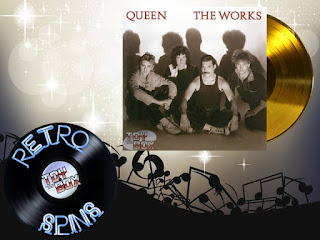 In the middle of all that, somewhere, was The Works. The album features the massive hits, Radio Ga Ga, I Want to Break Free and Hammer to Fall. Then there's the rest of the album, which if I may interject from a biased opinion, is fantastic! Really, you'd be hard pressed to find a Queen song I don't like. They're my all time favorite band for a reason.

The album delivers right from the start with Radio Ga Ga and continues to flow seamlessly from track to track as it rounds out with the soft spoken Is This the World We Created...?. I honestly can't imagine any one track missing from the album because it's so perfect the way it is...Again, biased opinion all the way.

Believe it or not, I actually ended up selling all of my CD's shortly after graduating high school, which included all of my Queen albums. However, things came full circle as the guy I sold them too would eventually end up offloading all of his CD's in the mid 2000's in lieu of the digital age. As such, Queen came home to me when I took all of them and more off of his hands.

Much like any good writer of a story, I already have my ending in mind for my CD collection. See, as I said above, my CD collection started with Queen way back in the 90's - The Hollywood Records releases which included remixes and bonus tracks. My plan, once I have all the other CD's I've been looking for crossed off my list, is to purchase the original EMI / Elektra CD pressings of all their studio albums thus completing the circle, or as Queen would put it, "As It Began".

Click "HERE" to go back to the home page. For more posts related to this one, please click the labels below.
Posted by The Toy Box on August 20, 2019
Email ThisBlogThis!Share to TwitterShare to FacebookShare to Pinterest
Labels: 1984, Queen, Retro Spins, The Works