The Tick has been bashing his way through the pages of comic books since his inception and first publication by creator / artist Ben Edlund. Since then, he's been featured in his own cartoon, a couple iterations of live action television shows and across numerous pieces of merchandise. He's a hero from an era where indie creators were starting to be noticed in the world of comics, and as time has gone by, he's become a pop culture icon unto himself.

Which is why I'm somewhat sad to say I never really paid that much attention to the character.

It's only been as of recent that I started watching the Amazon series, and quite frankly, I could take it or leave it. It's okay for a chuckle here and there, but it's by no means sucking me in as "must see TV". In fact, at this point, it's been several months since I've even seen an episode, and I'm several behind.

However, my personal viewpoint of something doesn't negate its overall popularity across the world. Not by a long shot. That's why I can still appreciate the figures produced by N2 Toys back in 2002 based on the first live action series staring Patrick Warburton and David Burke. 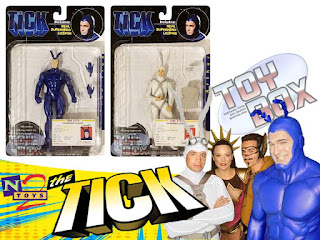 Though the show found mild success with an audience, Fox seemed sparsely interested in promoting the show. This wasn't helped by the overall cost of each episode as a result of tight filming schedules which resulted in a lot of overtime on behalf of the cast and crew. At the end of the day, Warburton himself said it best. He claimed Fox mismanaged the entire series, leading to its inevitable cancellation. In hindsight, that seems pretty accurate. It lasted for only one season of nine episodes. 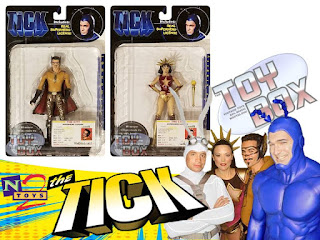 N2 Toys planned a second series of figures which unfortunately never went into production. This wave would have included Champio, Destroyo, Red Scare and The Terror. Obviously, with no television series to back the line, N2 Toys, which was a company full of toy isle struggles to begin with, cancelled the line.

Last in the line was the seventeen inch Talking Tick. This was a soft body "figure" with a sculpted plastic head. Give his tummy a little squeeze, and The Tick will say one of eight sayings - or Tick-isms as the back of the package calls them: 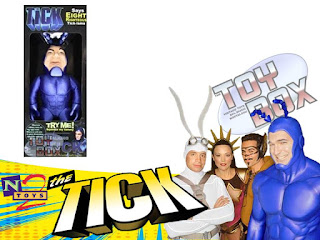 At roughly six to fifteen dollars on secondary markets, the figures haven't yet found a foothold in the collector's market. That may be great news for you if you're looking to add these to your collection, that's definitely not a bad buy in price.

Click "HERE" to go back to the home page. For more posts related to this one, please click the labels below.
Posted by The Toy Box on January 06, 2020
Email ThisBlogThis!Share to TwitterShare to FacebookShare to Pinterest
Labels: 2000's, N2 Toys, The Tick
Newer Post Older Post Home