Need a cheap and easy product to pad your toy line? Plastic balls have you covered all day long!

Playmates Toys was riding a big wave in the late 80's / early 90's with TMNT based product and they were willing to try anything to make as much money as possible. If one of the four Turtle's could be incorporated into it, they were open to the idea. Troll Dolls, Frisbee's, Plush and, as you've probably guess already, balls (just to name a few)! 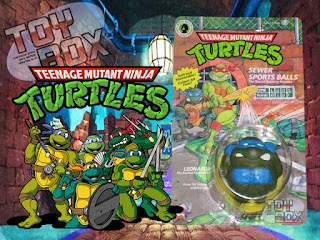 There's really not much to say here. They're balls. They're in the shape of one of the four Turtles, and you throw them, kick them, or in general, abuse them. What more do you need to know? 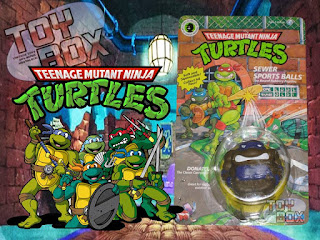 One of each Turtle was produced, and each featured their own sculpts - Something which Playmates Toys was always most notable for. They rarely reused molds for anything during the entire run of original TMNT products. 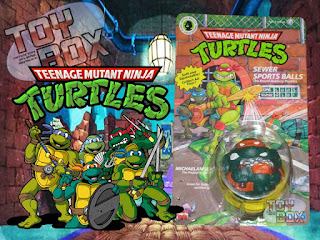 Each ball came carded individually in a bubble, and as you can see from the cardback, were hinted at being used in place of a baseball. 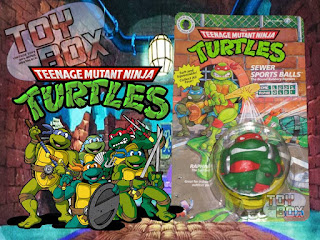 Playmates also produced a much larger football style ball. However, these did not come carded, but rather wrapped in cellophane, and only Raphael was released. To date, this is the hardest out of all of them to find - sealed or otherwise. 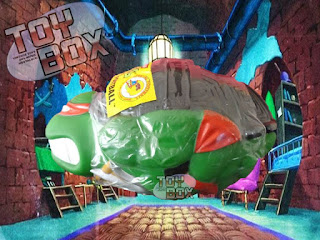 These aren't one of the most popular items Playmates Toys released. However, they are unique and a definite conversation piece among TMNT collectors. Their obscurity is what I think leads most fans to be so intrigued with them. They're pretty darn expensive too. I've seen single carded balls go for as much as $60.00. I've also never seen one of the footballs for sale on secondary markets.

Click "HERE" to go back to the home page. For more posts related to this one, please click the labels below.
Posted by The Toy Box on January 27, 2020
Email ThisBlogThis!Share to TwitterShare to FacebookShare to Pinterest
Labels: 1990's, Playmates Toys, Sewer Sports Balls, Tales of the Teenage Mutant Ninja Turtles, TMNT
Newer Post Older Post Home