Fans of "X" books can't seem to get enough of the numerous iterations of them, and Marvel Comics is more than happy to oblige. One such answer for more was the 1998 to 2001 Mutant X written by Howard Mackie and inked by Andrew Pepoy.

The series involved a story with lead character, Havok, who had been transported to a parallel dimension - The Mutant X Universe. Taking the place of an alternate Havok, he leads a team known as The Six, who are altered version of his companions from Earth-616. I won't spoil any of the plot specific elements beyond that for those of you looking to read the series.

Toy Biz produced a small, fan favorite, set of figures based on the books. While it was well received by Marvel Comic figure collectors, it was sadly never intended to be anything more than a niche series with no life beyond the initial four figures. This was common during this particular era of Toy Biz Marvel related lines. Just a little taste before the company was on to other things. 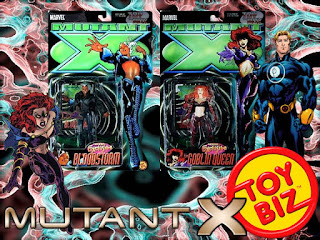 The thing I like most about this particular set of figures is the unique cardbacks. Not only does each one feature fantastic art of the character inside, but it's not your traditional "rectangle" style. The cut to the card follows the character's body, making for a really nice look, but a fragile one at that. I really like when toy companies put that little added extra effort into their packaging. 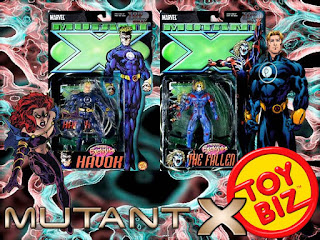 The figures aren't too common on secondary markets. However, at the same time, they're by no means "valuable". I've seen them sell for as much as twenty-five bucks a piece, but typically the more common selling price point is around seven dollars. Out of all of them, Bloodstorm and Havok appear to be the most common, but again, they're still few and far between to be found.

Click "HERE" to go back to the home page. For more posts related to this one, please click the labels below.
Posted by The Toy Box on March 30, 2020
Email ThisBlogThis!Share to TwitterShare to FacebookShare to Pinterest
Labels: 1990's, Mutant X, The Uncanny X-Men, Toy Biz, Uncanny X-Men, X-Factor, X-Men
Newer Post Older Post Home