It seems like every time Tim Burton directs a movie, he gets the majority of the credit for its success.

In 1988 Bettlejuice was released nationwide, and pulled in a whopping 73.7 million dollars. Not bad for a film which was made for only 13 million.

Kenner purchased the rights to create a toy line based on the film, and in 1989 released two series, one sub series, and a handful of vehicles/playsets.

The figures came packaged in a white/lime green packaging which featured each character depicted in a drawing at the top right of the card. The bottom right of the card was reserved for a photo of the "action" each respective figure had - Most of which was removing heads to reveal hidden ones underneath. 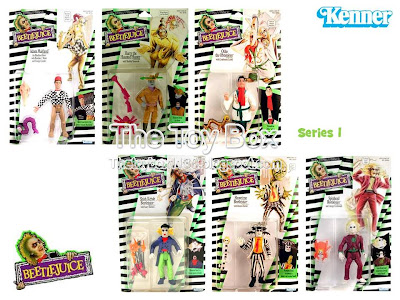 While series one had six figures, series two only had two. The packaging also got a re-coloring, and now contained a majority of lime green color as opposed to white. The overall design (however) remained the same. 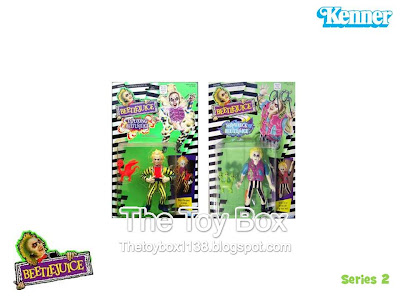 A sub series of four figures entitled "Neighborhood Nasties" was produced during the second wave of figures. Unlike the first two waves of figures, these particular toys had no correlation with the film. The packaging was the same as that used for wave two. 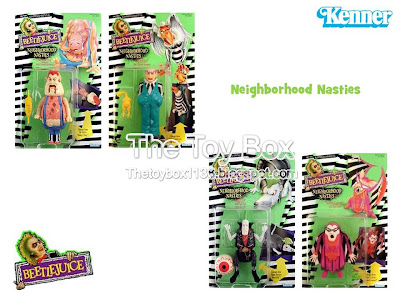 One playset and two vehicles were created for the series - Though none of them were based off of things seen in the films. Though I suppose you could pretend that the grave was. 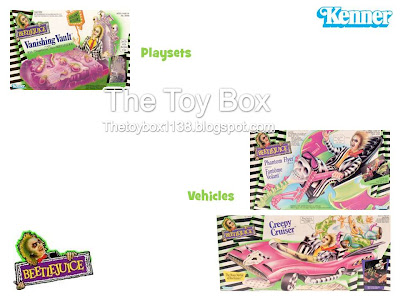 The series did fairly poorly on the market - Mostly because many children had never seen the film. The secondary market seems to have forgotten about these toys as well, as a mint in package figure sells for as little (or sometimes as much) as a dollar or two. The vehicles and playset can be found for between five and ten dollars.

It's sad to see that for a film that did so well, the toy line never found a home. But, for those who have seen the film, this is certainly a great set to track down, and it won't cost you much. The difficult challenge is actually finding all the individual figures, as they are pretty sporadic on the secondary market.

Join us next time for our look at Blood Wolves!