Some of the best toy lines out there are the ones that very few people know about it. The 1988 Food Fighters (not to be confused with the band Foo Fighters) from Mattel is one of those lines. Combat at its Kookiest was its tagline, and kooky it was.

The series wasn't based on a television show, a comic book, or any other sort of entertainment related items, but rather was designed specifically for an action figure line. A total of ten figures were produced, along with four variants. Each figure, which included a weapon and a backpack, was made of a soft, hollow plastic similar to a squeaky toy that you would give your dog – though without the squeak. 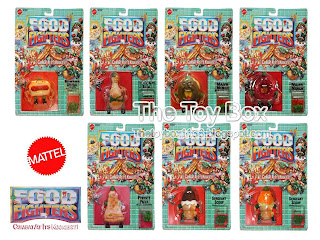 A variant of Major Munch was produced which depicts the character as both a chocolate glazed (original), and a strawberry glazed (variant) donut. A variant was also produced of Sergeant Scoop which depicts the character as a chocolate covered vanilla ice cream cone (original), and butterscotch covered vanilla ice cream cone (variant). 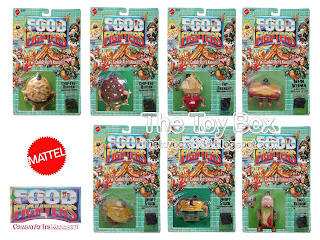 A variant of Chip the Ripper was produced which depicts the character as both a chocolate chip cookie (original), and a chocolate macadamia nut cookie (variant). A variant was also produced of Short Stack which depicts the character with maple syrup on top of his head (original), and blueberry syrup on top of his head (variant). 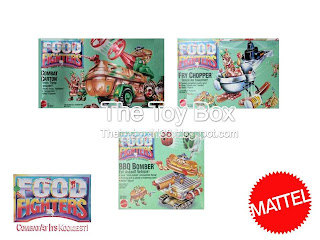 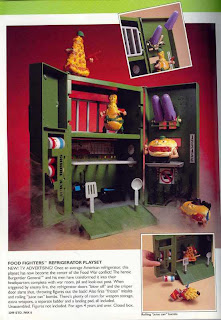 A Refrigerator Playset was designed and advertised in toy catalogs as an item that was coming soon, but due to lackluster sales, the series was cancelled prior to it being released. Much like the vehicles, the playset was designed with projectiles and dropping bomb like items in mind via its firing popsicles, and bombing soda cans.

Unfortunately Food Fighters suffered the fate of a series that was simply unknown - With no animated Saturday morning cartoon, or sufficient advertising, the series simply drifted off into plastic history.

For those few who do remember it, the secondary market can become quiet the battlefield. Full mint on card sets of ten figures can fetch as much as $150.00, and mind you, that's not including the variants. A mint on card set of just the four variants can fetch as much as $250.00. The vehicles don't see as much success, and can sell for as little as $75.00 for all three, mint in boxes.

Join us next time when we take a look at Inhumanoids!

Posted by The Toy Box on July 05, 2012
Email ThisBlogThis!Share to TwitterShare to FacebookShare to Pinterest
Labels: 1980's, Food Fighters, Mattel